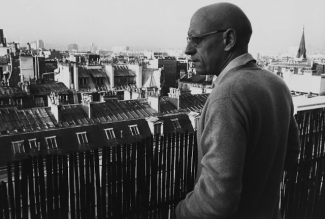 This is an entry in FPR’s One Thousand Words series. Over the next few months, perhaps longer, several dozen contributors will tell us what we need to know about a wide variety of figures—some obscure, some not—in one thousand words or less. Forthcoming: posts on Dwight MacDonald, G. K. Chesterton, Charles Portis, Jane Jacobs, Leo Strauss, Paul Gottffried, Charles Taylor, Irving Babbitt, Bernard Lonergan, Machiavelli, and many more.

Everyone who knows the name “Michel Foucault” has heard some unpleasant things about the man. If his “postmodern” label isn’t enough to kill one’s interest, there are stories about his recklessness (or malice) after contracting AIDS, his frequenting of sadomasochistic gay bathhouses, and so on. Foucault’s hairless face is a twentieth-century icon of perversion and the Nietzschean will to domination.

But he is worth reading for at least two reasons.

First, Foucault’s work has been extremely influential in the American academy. Even though this influence has become less apparent in recent years, as much of the system has moved away from postmodern relativism toward a resurgent anti-metaphysical scientific rationalism, Foucault’s attitudes (toward mental illness, sexuality, fringe identities, power dynamics, and the cultivation of selfhood) are not only becoming more popular, but have even become the norm in much of our society. If Judith Butler is the beating heart of Queer Theory, then Michel Foucault is its spirit. Together, their impulse toward subversion and genealogical deconstruction is probably the key transformative force in the ethical life of private Americans today.

To read Foucault on sexuality and perversion is to see the logical endpoint of the movement for sexual liberation, and to grasp clearly some of its more elusive internal principles.

Second, Foucault is worth reading because on many points he presents something very close to the truth. His analyses of the genesis and transformation of different modes of knowledge, social exclusion, and intellectual behavior often hit the mark. Bracketing his outright rejection of the transcendentals for a shifting ontology of power relations, Foucault’s account of human sociability and the relationship between power and knowledge is extremely apt in a world marred by original sin. He is a fine conversation partner and a versatile critic, and keeping him in mind will help sharpen your own ideas and keep you honest about the roots of your favorite philosophical concepts.

Foucault’s works return frequently to the concepts of power, knowledge, and the formation of order. In his History of Madness, Foucault traces the relationship between madness and varying forms of moral and social order from the fifteenth century to the age of Freud. What makes the work peculiar as a history of psychology is its refusal to privilege later psychological taxonomies and diagnostic structures over those at work in earlier periods.

A further peculiarity is one of the book’s core theses: the claim that madness is not a stable feature of objectively disordered minds, but a shifting set of experiences and structures by which a terminal “other” is divided off from the rest of society so as to make possible society’s own inward ordering. The exclusion and isolation of the mad is a positive and historically contingent process by which reason defines itself. Foucault concludes that in the nineteenth century figures like Sade, Goya, and Nietzsche turned the tables on modern rationality and laid the foundation for a new tribunal in which rationality itself could be brought to trial before the judgment seat of madness.

The idea of madness is a good entry point for the rest of Foucault’s work. Just as in the History of Madness he attempts to find the contingent historical roots of a seemingly objective and universal phenomenon, throughout his corpus Foucault is occupied with the ordering structures and technologies which give rise to systems of knowledge/discourse and consequently the objects with which those systems are concerned. His investigations are largely structuralist in tenor: How do the distinctions and limits within our taxonomies make possible the experiences and objects which populate reality? What alternative sets of differences, what alternative modes of order, are possible? Have existed historically? Might arise out of the collapse of the current system?

Each successive book takes on a particular object of knowledge or political institution (madness, hospitalization, the human sciences, imprisonment, sexuality) and performs an “archaeological” excavation of its historical roots. At first these investigations are largely dominated by quasi-structuralist and quasi-phenomenological modes of analysis—much is made of shifting theories of grammar and taxonomy in The Order of Things, and there are extended discussions of modes of experience in the History of Madness—but as Foucault matures, the influence of the structuralists subsides and is replaced by his true loves: Martin Heidegger and Friedrich Nietzsche.

Foucault’s famous essay “Nietzsche, Genealogy, History” makes his relationship to Nietzsche clear. Foucault himself described his work as a continuation of Nietzsche’s genealogical project. However, unlike Nietzsche, Foucault rejects all hermeneutics of depth and insists on remaining at the level of the everyday, restricting his analysis to “surface phenomena” without any reduction to a secret will or intention governing history. As in Nietzsche, power is a central concern in Foucauldian genealogy, but here power is not a hidden will to domination. Instead, Foucault defines it as the field of force relations by which order is sustained and transformed, and the compounding of these relations in systems and institutions. Power is not sovereignty, but difference, and the emergence of differences within the field of power relations is what drives change and creates new objects of experience, new struggles, new realities.

Foucault’s conception of power is as much tied to the structuralist vision of the roots of meaning in difference as it is to Heidegger’s understanding of what enables objects to emerge in the concernful everydayness of human existence. Systems of value and concern drive the ramification of distinctions in particular discourses (consider the connection between the requirements for tenured positions and generational shifts in academic research), and ultimately shift the orientation of knowledge in general.

For Foucault, relations of power transform “common sense,” create broad systems of prejudice, and determine the default systems of value and awareness within society. The analysis of power relations and their impact on the formation of discursive structures is Foucault’s greatest philosophical contribution, and he is worth reading—if for no other reason—simply for the species of criticism this mode of analysis makes possible.

I’ll leave the basics of Michel Foucault’s life and career to other sources. The standard English-language treatment of Foucault’s thought is Hubert Dreyfus and Paul Rabinow’s Michel Foucault: Beyond Structuralism and Hermeneutics. The best (short) firsthand introduction to the man’s work is probably his Preface to The Order of Things. For a good collection of his essays and interviews, there is The Essential Foucault.

If one were to read only one of Foucault’s books, I would recommend the first volume of The History of Sexuality, though his greatest work (in scope) is probably the History of Madness. Foucault’s corpus in English continues to grow as his minor works are translated and published. Picador is still producing a series of his lecture courses. The New Press has a very good multivolume collection of his essays. The standard editions of his major works are published by Vintage, and Routledge has a wonderful edition of the History of Madness, complete with Foucault’s replies to Jacques Derrida from their famous debate.

Elliot Milco is a graduate of Yale University and the Dominican House of Studies.  He currently teaches theology at Loyola Academy in Wilmette, IL.