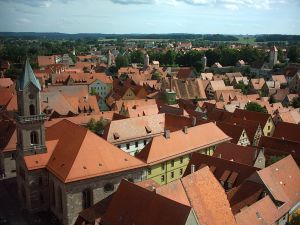 This is an entry in FPR’s One Thousand Words series. Over the next few months, perhaps longer, several dozen contributors will tell us what we need to know about a wide variety of figures—some obscure, some not—in one thousand words or less. Forthcoming: posts on Dwight MacDonald, G. K. Chesterton, Charles Portis, Jane Jacobs, Leo Strauss, Paul Gottffried, Charles Taylor, Irving Babbitt, Bernard Lonergan, Machiavelli, and many more.

The German author Wilhelm Röpke (1899–1966) is perhaps the most important economist for American traditionalists. He brought a number of technical arguments to bear on important policy issues of the postwar era, many of which are still applicable. However, for Front Porch Republicans, his proposed social policies are of especial interest.

Throughout his professional life Röpke was concerned about a socially and morally responsible market economy and the policies it entails. An ardent opponent of all forms of collectivism, he spoke and wrote not only against the ideologies of national socialism and communism, but against the more subtle forms of collectivism found in the ostensibly more democratic and free countries of the West.

Röpke’s central social policy concern was the distribution of economic power. Freedom and basic human happiness are best met in an economy where individuals and families are able to take responsibility for their own lives, he believed, and that meant some social and economic arrangements are better than others. Throughout his writing, Röpke therefore decentralization, deproletarianization, family farms, and small-scale artisans and merchants.

The concentration of industry in the form of large corporations and monopolies or near-monopolies is a major obstacle to a healthy economy, Röpke believed. Large-scale industries are not necessarily more efficient than small- and medium-sized firms, which are often more flexible and responsive to the needs of their customers. They do, however, tend to turn their economic power into political advantage, since it is easy for them to become the special interests which control government policies and politicians to the detriment of the overall needs of the economy and society.

This is not the only complaint Röpke lodged against mammoth economic entities; for example, he also criticized the manner in which work was organized and supervised according to the famous Taylor system. He also argued that the de-personalizing and mechanizing effects of large-scale enterprises were self-defeating, not to mention inhumane, and that for collectivism to be defeated it was imperative for the free societies of the West to return real meaning and self-determination to workers, along the lines of the traditional artisan.

To “de-proletarianize” the worker, Röpke emphasized the need for workers to have their own productive property and become small capitalists. The city worker also needs to possess his own productive property, at least in the form of a garden lot so that he might grow some of his own sustenance. Röpke advocates measures such as this because they provide not only for human happiness but also a measure of independence from government and from the instability of the market’s business cycles.

Because small-scale agriculture is critical to a healthy society, Röpke was not content to leave this sector of the economy to the vicissitudes of the free market. Some measure of public policy was needed to preserve a healthy “family farm” culture. Röpke argued that peasant agriculture is “that particular form of production” which “alone possesses the inestimable sociological importance” of being the “last mighty refuge in the face of collectivization, mechanization and urbanization.” Röpke wrote that this way of life is the scene of life and work, of production and consumption, that provides shelter and working quarters, brings men and nature together, affords satisfying and purposeful activity and immediate enjoyment of its fruits, promotes in an ideal manner the independent development of personality and at the same time the warmth of human fellowship, and thereby counterbalances the industrial and urban aspects of our civilization with tradition and conservatism, economic independence and self-sufficiency, many-sided activity and development, proximity to nature, moderation and tranquility, a natural and full existence near the sources of life, and a humble integration into the chain of birth and death.

As such, agriculture is one part of the national economy to which the principles of a market economy can only be applied with broad reservations. “[T]he peculiar conditions obtaining here having always confronted economic policy with special problems which could not be left to solve themselves,” wrote Röpke. For this sector of the economy, then, a “particularly high degree of far-sighted, protective, directive, regulating and balancing intervention is not only defensible but even mandatory.” This support can occur only within narrow limits but within those limits it is vital. Röpke distinguished his support for peasant agriculture from agribusiness and economic nationalism with its subsidies and collectivistic tendencies.

Finally, Röpke wanted to revitalize the socioeconomic form and role of artisans and merchants. He saw a complementarity between industry and artisans and merchants to the extent that they are not really competing in the same arena, that is, to the extent that the product or the quality differs. With rising incomes, the preference for handicraft products can more easily be indulged. However, this depends on educating the consumer to understand and recognize differences in quality. It also requires that handicraftsmen retain high professional standards of work.

The small trader, likewise, is vital to a healthy economy, thought Röpke, though there are more sociological problems here. The small trader “is to all intents and purposes wholly absorbed in the business of selling and easily dispenses with the ‘objectifying’ influence of creation which protects men against the bare struggle of interests.” Still, there are examples of traders espousing a solid tradition and professional honor. Their role in the national economy needs to be strengthened and expanded.

In sum, Wilhelm Röpke’s sought to describe how we might stabilize an otherwise unsteady modern market economy with minimal reliance on government, while also preserving the humane elements of a healthy social order—especially the small-scale producer.

For a more complete understanding of Röpke’s thought, the interested reader should consult his major works: The Social Crisis of Our Time, and The Moral foundations of Civil Society, both available from Transaction Publishers at www.transactionpub.com, and A Humane Economy, available from the Intercollegiate Studies Institute (ISI) at www.isibooks.org.

For Röpke’s more technical economic writings, see his Economics of the Free Society and Crises and Cycles, to name only two, available from Amazon at www.amazon.com. For some interpretive essays on Röpke, see “The Third Way: Wilhelm Roepke’s Vision of Social Order,” from ISI at www.firstprinciplesjournal.com. For a number of other essays applying and interpreting Röpke’s views, see The Imaginative Conservative at www.imaginativeconservative.org.