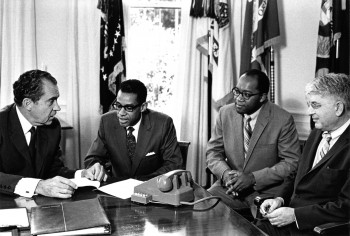 The following is the second installment of John McClaughry’s memoir, Promoting Civil Society Among the Heathen.  See the previous chapters here.

3. The Community Self Determination Act

During my year at the Institute of Politics at Harvard I fell in with Dr. Gar Alperovitz. Gar was a scholar and soldier of the Left, having won wide attention for his dissertation – a revisionist history arguing that Truman’s decision to drop the atomic bomb on Japan was influenced mainly by his need to intimidate the Soviet Union (Atomic Diplomacy: Hiroshima and Potsdam, 1965).

As a leftist, Gar didn’t much like big business, but he also harbored misgivings about the trustworthiness of big government, which as a leftist he viewed as the tool of corporate interests. He had a real concern for empowering poor victims of capitalism and racism by making them masters of their own fate in their communities, squarely within the civil society tradition. He thus favored cooperatives, worker’s collectives, community development corporations, and worker ownership.

While at the IoP Gar and I began conceiving a bill to promote “community self-determination”, a cause then championed by CORE national chairman Roy Innis. When we whipped it into shape, we persuaded four senators – Percy, Nelson, Harris and Javits  – to introduce it (with 22 cosponsors) on July 25, 1968.

The bill would have authorized creation of CDCs along the lines of Federal Land Bank Associations, or tribal development corporations on Indian reservations.  There were many pages specifying boundaries, structure, elections, checks and balances, etc. to meet Innis’s requirement that a CDC, like an electric utility, have a monopoly in its self-defined territory. (Roy had in mind being the impresario of Harlem, and didn’t want to have to fend off competitors.)

Once organized and given a startup grant, the CDC would have access to a community development bank, which would have access to a secondary institution to resell loans. The CDC might launch its own businesses, likely community-focused retail and services. Importantly, larger businesses entering into partnerships with the CDC would thereby enjoy half a dozen significant tax benefits.  Contrary to widespread belief, the actual enterprise was not required to be within the CDC’s territory. If it was, it was expected that the CDC’s community support and supply of local workers would protect the enterprise from riot damage. If the enterprise was elsewhere, the CDC became a passive investor in a deal made viable by the partner corporation’s tax advantages. The CDC would receive its share of the profits and employ them in community betterment.

This was certainly an ambitious effort. As with the Percy NHOF bill, it attracted significant (though not as extensive) support from Senate and House Republicans. One high water mark was a front page spread in the New York Times (July 25, 1968) announcing the introduction. It carried a photo of the four lead Senators seated with Innis, James Farmer, and NRECA executive Robert Patridge at a news conference announcing the bill’s introduction.

Presidential candidates Nixon and Humphrey gave the bill their endorsement. Neither was really serious about it. A CSDA forum at a Washington hotel including numerous minority activists and corporate CEOs essentially killed the idea, when the black leaders present descended into a shouting match with each other, and the whites tiptoed out of the hall. New Sen. Charlie Goodell (R-NY) had an interest in it, and we rewrote (at Don Rumsfeld’s suggestion) it to throw out the many pages made necessary by Innis’s insistence on a territorial monopoly. The revised version appeared as a committee print, but was never introduced.

The CSDA was an economic development bill, just as the NHOF was a housing bill. Still, both were at least implicitly designed from a civil society perspective. If people in a disorganized minority community could be stimulated to come together to produce better housing or ownership of newly created wealth, we hoped the feeble civil society would revive, with all its blessings. That has actually happened with some CDCs, on the Choctaw lands in Mississippi and famously at Mondragon, in the Basque region of Spain.  It’s a tough task, but we thought it was worth a try. Live and learn.

In fairness, the late 1960’s rise of minority business enterprise began with Lyndon Johnson’s SBA Director, Howard Samuels. He used the resources of his office to reach out to minority communities with the aim of financing more minority business ownership.

But the real push for MBE began with Richard Nixon’s national radio addresses titled “Bridges to Human Dignity”, delivered on April 28 and May 2, 1968. These originated with Nixon’s speechwriter Ray Price, who had called me down from Harvard to help him craft the contents and language.  It occurred to me that there might be some mordant symbolism in the Republican presidential candidate having to obtain counsel on inner city minority issues from a Harvard fellow who had grown up in an Illinois farm town and built himself a log cabin in the back woods of northeastern Vermont.

In his remarks Nixon called for “new bridges between the developed and underdeveloped segments of our own society… incentives to private industry to make acceptable the added risks of ghetto development and training the unemployed for jobs… the bridge of black success…the development of black capitalism… [helping] Negroes to start new businesses in the ghetto and to expand existing ones.”  Nixon said “people need property rights .. essentially the economic power that comes from ownership, and the security and independence that comes from economic power.”

The two Bridges speeches deservedly got widespread attention. A lot of thoughtful black leaders said “American needed to hear something like that from somebody like Nixon.” But they were also criticized especially on two points. One was Nixon’s apparent belief that “black capitalism” was to flourish in the “ghetto”, while the rest of capitalism would create prosperity everywhere else.

The other was the regrettable use of “black capitalism”. This phrase had been offered by another Nixon speechwriter, Bill Safire, who for all his etymological erudition did not have much grasp of the implications of that term. The Left, always eager to attract the toiling black masses into the Movement, immediately objected that Nixon wanted to make “Negroes” into slaves of capitalism. The tongue in cheek response to that charge – that “at last, capitalism will become an equal opportunity enslaver” – would probably not have worked very well.

When I heard the first speech given, while back at Harvard, I gagged on the “black capitalism” mention, because I knew it would force the debate into attacks on capitalism as the leading engine of oppression. I called Price and protested. In the second speech “black capitalism” had disappeared, to be replaced by the desirable and wholly non-ideological “black capital ownership”. However, the damage was done, and forever after the Nixon program became known as “Black Capitalism”.

The story of “black capitalism” in the hands of Nixon appointees properly lies outside of the subject of civil society. It had its heroes – Tom Roeser, John Topping Jr., and Alex Armendaris – and its comic villains, Maurice Stans and Abe Venable. One anecdote will suffice to illustrate the completely uncomprehending of many Republicans to anything relating to neighborhoods, minorities, or civil society.

Early in his presidency Nixon created the Office of Minority Business Enterprise, within the Department of Commerce, to advance the concepts explained in his Bridges speeches. The Department was chaired by Maurice Stans, a conservative Wall Street financier and huge Nixon fund raiser. Stans had yearned to be Treasury Secretary, but somewhere along the way Nixon had promised to name a Treasury Secretary who wasn’t one of the New York City finance barons (David Kennedy of Chicago). So Stans was shunted off to Commerce, where not much was going on.

To make this demotion worse, when Nixon presented his Cabinet at a Washington hotel celebration, he got down to Stans and forgot his name, saying to the audience something like “and this fine fellow here will be my Secretary of Commerce!”.

Stuck with running the dog pound, Stans seized upon “black capitalism” has his showcase program. I successfully – for once – lobbied the White House to get Stans to name Thomas Roeser as the first head of OMBE. Tom was the civic affairs agent of Quaker Oats in Chicago, and was highly competent, well-motivated, politically shrewd, and well respected by minority groups there.

Stans took Roeser, but for a completely different reason. The chairman of Quaker Oats, Bob Stuart, was Republican National Committeeman from Illinois, a Nixon loyalist, and a heavy hitter in party circles. Tom was his PR flack – just what Stans wanted.

Stans’ familiarity with minority groups was apparently limited to ordering about native porters on his many expeditions to decimate the animal population of Africa. He promptly decorated his cavernous Secretary’s office with the heads of his victims – the trophy animals, not the porters.

Maybe six months after OMBE was launched, it came to Stans’ attention that the Office’s 125 (as I recall) employees included a majority of minorities. Stans could not imagine an effective government agency, a majority of whose employees were black and Hispanic, except possibly the building maintenance unit.

Stans summoned Roeser to explain why “71% of your employees are minorities”. Roeser pointed out that after all, this was the Office of Minority Business Enterprise, and minority staff were perhaps better equipped to deal with the subject matter than white people. Stans didn’t buy it. “Do something about it,” he ordered.

Departing the Secretary’s office stunned, Roeser went to the office of his own deputy, Abraham Venable, who was black. The affable Venable’s greatest talent had been getting noticed by the new people in power, who were hungry for presentable high level black employees. Venable’s talent and motivation for getting on the winning side of every debate had been often noted.

“Abe,” said Roeser. “I just came from the Secretary’s office. Stans says we have too many minority employees at OMBE, and I’m supposed to do something about it. This could become a career threatening crisis for us. What should be do?”

Venable’s reply: “Well, let’s fire some of those black sons of bitches.”

Not long after, Roeser threw in the towel. He was succeeded by an earnest young Chicano businessman named Alex Armendaris, who saw the stimulation of minority-owned business as an important factor in neighborhood redevelopment.

In June 1973 OMBE offered a contract to the Institute for Liberty and Community, which I had created in Vermont as a vehicle for then-unanticipated educational activities. In essence, ILC became OMBE’s extramural contract research office, producing qualified people to provide OMBE with research that it needed. The first contract was for $112,000, which happened to be exactly the amount that OMBE would have to return to the Treasury unless it was spent by the end of the fiscal year. Each of the two subsequent contracts called for less money – surely a novelty for a Federally supported program – and we ran the final half of 1976 on the unspent savings from the previous two years. Our final report to Armendaris explained why the time had come to close down OMBE, another unique product in the annals of Federal research. Armendaris sent a warm letter of appreciation, and the office was closed when the Ford administration expired.

Perhaps OMBE’s most valuable contribution to the civil society movement was publication of several important reports produced through the contract with ILC. The most significant was a report by Geno Baroni and Gerson Green of the National Center for Urban Ethnic Affairs, entitled “Who’s Left in the Neighborhood?” This paper formed the framework for the May 5, 1976 White House Conference on Ethnicity and Neighborhood Revitalization” (see the following chapters).