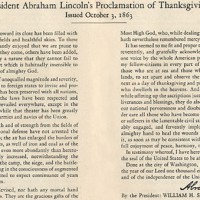 [Cross-Posted to In Medias Res]

Amongst those Americans who believe that the civic virtues which make both popular government and a fulfilling independence possible are themselves dependent upon, to a great extent, the preservation of traditions and an attachment to place–in other words, amongst those Americans for whom the call of “localism” has some substantive political and moral meaning–no one gets beaten up quite as much as Abraham Lincoln. No, he’s not generally made out to be an absolute enemy to all forms of classical republican and participatory democratic virtue, but admittedly, the way in which Lincoln’s legacy seems sometimes to almost define the deep meaning of American history can drive many a localist to extremes. It cannot be denied, I think, that Lincoln’s response to the secession of the Southern states firmly (and perhaps also unavoidably) tied the forces of America’s national government and economy to industrial capitalism, entrepreneurial expansion, and liberal universalism: all agendas which, whatever their many obvious benefits for millions of American citizens, both black and white, immigrant and native-born, over the past century and a half, were and remain today destructive of local attachments and places. The recent 150th anniversary of the Gettysburg Address–a speech which I think, like it or not, has become the most consequential and important that any American president has ever given–reminds those of us with localist sympathies that, to a great extent, Lincoln managed to bring out of (or–perhaps better–through) the blood and horror of the Civil War a kind of national evangelism, and that the content of that redemptive nationalist narrative is basically an ideological expansive, rather than a humbly traditional, one. And so the frustrating legacy of Lincoln’s actions at a long-ago time of violent and desperate dissension (which, thankfully, has never quite been repeated–and, hopefully, never will be in any of our lifetimes) remains.

On this Thanksgiving Day, however, I want to acknowledge a different (and, I think, more meaningful, if perhaps not ultimately more important in a political and economic sense) 150th anniversary. Today, November 28, 2013, is the 150th Thanksgiving holiday since President Lincoln, encouraged by both the indefatigable efforts of Sarah Josepha Hale and hundreds of other (mostly female) local activists throughout the country, as well as perhaps his own sentimental (even pious) hopes for the union, issued a declaration officially setting aside the last Thursday in November as a national holiday. (After President Roosevelt messed with the holiday some in 1939 and 1940, Congress settled upon the fourth Thursday, where it has remained ever since.) People can properly argue the pros and cons of the sort of civil religion which Lincoln’s rhetoric, in the Gettysburg Address and elsewhere throughout the Civil War, ended up establishing throughout the nation, and I can jump into that debate and find sympathy for both sides, as I think is probably the case with most sympathizers with localism in our thoroughly nationalized and globalized 21st-century country. But when it comes to the establishment of America’s Thanksgiving holiday–which I would argue is the formal high point in our yearly national liturgy, one which unavoidably involves, in President Lincoln’s words, an invitation to observe “a Day of Thanksgiving and Praise to our beneficent Father who dwelleth in the heavens”–I am nothing but a complete enthusiast.

Holidays are important to me–important enough, at least, to be happy to argue at length about their significance. To sum up my beliefs about the matter as briefly as possible (read the longer version here): yes, I acknowledge that in our late modern world of individual subjectivity, personal and intellectual and even moral mobility, and–perhaps most importantly–disposable consumerism, it is hard to make the case that there is anything “traditional” about holidays. They can all, without exception, be attacked as “invented” occasions, making use of a “fake” history, concocted solely to address or celebrate or salve some political or social or religious interest. I would respond, though, that such inventing is never a totally and circumstantially “interested” phenomenon; rather, every holiday celebration is constructed through exactly the sort of “creative remembering” which actually (at least assuming one accepts the basic fundamentals of Gadamerian philosophical hermeneutics, or Polanyian tacitness, or even Oakeshottian common sense) describes the way in which all of us think about, and discern meaning in and through, the experiences that we are embedded in. In the matter of Thanksgiving, it was an occasion which connected Sarah Hale and many others to both a past and a particular place, and the meaning which she and others, as the 19th-century progressed and ultimately turned to war, found in that connection pressed upon them as something worth formalizing. She was not alone in feeling this way; by the time of the Civil War, 25 out of the then-existing 34 states had issued their own Thanksgiving proclamations. So the holiday, far from being invented by a placeless president to sanctify a devastating war, was an organic development, a collective and pious expression–or remembrance–of something which had genuine spiritual meaning nationwide.

Is that, in itself, a reason to challenge the holiday, at least insofar as its ties to the legacy of Lincoln are concerned? Why have national holidays at all? Shouldn’t that collective and creative remembering be reserved to communities which share a locality and a history which every member can be a participant in?

Well, of course, local communities and individual states can and do articulate their own formal occasions of commemoration. And moreover, I can see the point of the complaint: accepting the existence of a nation-wide community capable of such a formal, civil remembering–that is, accepting the idea of an American national community, if only for the purposes of being able to collectively acknowledge a certain thankful relationship to God–will invariably add moral legitimacy to the national state. To which I can only respond: I’m not sure how any localist who isn’t actually a complete utopian anarchist or individualist or libertarian–as worthy of interest as those approaches may be–can wholly deny the subsidiarian legitimacy of at least some national level of government. We are a mobile people (and always have been), and who is to say that the growing reliance upon–and the national reach of–the rhetoric and tropes of our civil religion wasn’t itself an outgrowth of a mobile people who, perhaps unintentionally, were seeking to keep in mind, in the midst of constant transformation (to say nothing to the creative destruction entrenched by the economic liberty of the Industrial Revolution), some kind of attachment and identity? Civil religions, understood in this way (and as I have argued before), are perhaps inexorable; any even moderately free people will seek to build them. In which case, if we Americans are to have a national government (and while there are numerous philosophical, prudential, and constitutional arguments to be made over what shape and scope such a national state ought to take, I am unpersuaded that there are an equal number of good arguments against its existence entirely), then isn’t it worth celebrating that this particular national state, 150 years ago, formally committed itself to as humble and localizing an ideal as, once a year, coming together with family and friends, and giving thanks for the productive work which has graced our lives together?

Note also that the nationalization and specification of this communal sense of historical thankfulness (however politically “invented” some may claim it to be), by invariably involving itself in larger processes both political and economic, created conditions through which certain virtues–certainly familiar ones, and perhaps in even civic ones–were promoted and allowed to grow distinctive, sheltered from the intrusions of the homogenizing marketplace and rival polities. Something as humble (though, for most of us, absolutely central to the holiday, even more than flag-football games at the local park) as the “traditional” foods we generally eat during the holiday are themselves an evolved expression of a particularly American sensibility–a middle-class, landowning, frugal, and community-sustaining one–which Lincoln’s Thanksgiving proclamation gave conceptual room to, implicitly challenging alternative (and aristocratic) norms which still held sway in the dining rooms of many of the nation’s elites in the 19th century. And, of course, the patterns of employment and commerce which developed around the holiday, enabled by national uniformity, were a large part of preserving its traditional and meaning-filled character as well. (There’s plenty of time to feel obliged to find some sort of connection with your friends and family and your shared past when the stores are closed and everyone is home from work.) Now those patterns are collapsing right and left, with relatively few exceptions (and with some market libertarians, predictably, rebuking those of us who denounce this change as “puritanical, anti-commerce prudes” and instead cheering on “the growth in 24/7 shopping”). Very likely any talk of a legislative response to this deplorable development is a non-starter–but whether that is because the popular religious meaning that the holiday enables us to creatively recollect and formalize in our civil lives is exhausted, or because the state which proclaimed the holiday (and by which our many local communities have situated their own recollections of gratitude) is held in contempt by a large portion of the population, is not for me to say. Very likely, both.

Still, let me end on a thankful note: despite the corporate bosses that see it merely as another day to dangle sales in front of a cash-strapped and status-obsessed populace, Thanksgiving still exists, and my American family, at least, along with some friends old and new, from church and elsewhere, still all agree that its a fine day on which to commemorate and share and remember, with turkey and pie and games and laughter and perhaps even a prayer or two. My thanks on this holiday are for all those who have blessed my life. By doing his part, 150 years ago, to impress upon part of my national identity (along with much else that I will happily argue against) something as fine as a reminder to be, in my particular place, grateful to God above…well, I have to say that Lincoln is one of those.