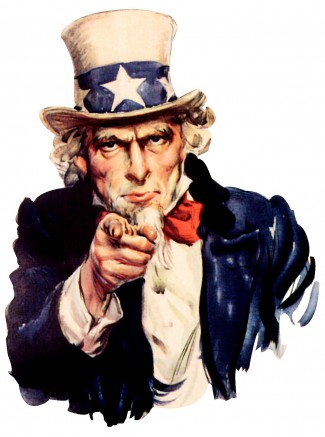 THE PRESIDENT HAS AN ASSIGNMENT FOR YOU:

This is what the bold text on the whitehouse.gov website tells us as it proudly heralds a new national “Student Film Contest”.   Next to the headline we find an image of the benevolently-smiling chief executive (and now national teacher-in-chief, with extra-constitutional powers to assign homework?), standing in the Oval Office, gazing approvingly over the shoulder of an appropriately-happy school-age girl who is smiling at a laptop screen.  Dreary and disappointing, but not at all surprising, is the required subject for entries in this contest:

Our schools are more high-tech than ever. There are laptops in nearly every classroom. You can take an online course on Japanese — and then video chat with a kid from Japan. You can learn about geometry through an app on your iPad. So, what does it all mean?

Don’t be fooled by that last question.  The White House is not actually interested in starting a reflective conversation on this topic.  There will be no national seminar on Heidegger’s Frage nach der Technik. The Student Film Contest will not be the venue in which to raise any probing questions about the effects of technology on our brains, our communities, our social life, upon the profession of teaching  No—the White House has something else in mind:

We’re looking for videos that highlight the power of technology in schools.

Here are some topics that you may want to consider as idea starters when deciding what your video could be.

How does technology help with:

Setting aside the observation that recent federal budget cuts appear to have adversely impacted proper hyphen use on government websites, the contest suggestions clearly communicate that the last thing desired in the student film entries is any actual “critical thinking” about technology’s role in education.  The question is biased: “How does technology HELP?”  As far as the White House is concerned, it’s all good; the mere possibility that someone might be skeptical of the benefits of this “power of technology” is not even admitted, and probably has not occurred to the White House staffers who are running this contest.  It probably didn’t make their list of “idea starters”.

But the assumption is clear: if you are critical of the faddish and unreflective technologization of our schools, your view is not part of the mainstream.  If you are skeptical of the outlandish educational promises being made by the peddlers of the current classroom iPad fad (maybe because you remember the non-fulfillment of the outlandish promises made in the 1970s about videocassette-based education, or the outlandish promises made about Apple II-based education in the 1980s), your views are unwelcome.  If you are even just a teeny weeny bit inclined to think that the perennial human problem of cultivating intellectual and moral excellence cannot be solved by ANY electronic technology, and that the pursuit of technological solutions to these problems is as inappropriate as the pursuit of a moral and spiritual solution to landing a man on the moon, then you might be discouraged from entering the contest. That earnest-sounding question “What does it all mean?” is not merely rhetorical—it is in fact a trick, one that probably has even the contest organizers fooled: it gets asked, so whatever is generated in response seems like an answer.  We sidestep questions of meaning and of ends precisely by convincing ourselves that we are answering by celebrating particular technological means.

Yeah, having your schoolwork posted on the fridge at home is cool. But having a video you made posted on the White House website and screened at 1600 Pennsylvania Avenue? We think that’s pretty cool, too. That’s why we’re super-excited to announce the first-ever White House Student Film Festival…

Words matter, and these words are a small dose of toxin.  Do they seem harmless to you?  No big whoop?  If we consider them all by themselves, you are probably right: they are negligible, inconsequential, like a few parts per billion of arsenic in your drinking water.  But the difficulty is that we cannot consider language like this all by itself.  The problem for our young people is that this kind of condescending, talking-down-to is nearly universal in our present civilization, and the White House isn’t helping.  Marketers, entertainers, politicians both red and blue, many churches, and schools alike are in the habit of communicating with the public this way, and the result is inevitable: the continuous downward leveling of our capacity for discourse.  As everyone gets used to being talked to in this way, everyone also gets more and more comfortable talking in this stunted, juvenile manner.  We become less capable of understanding, let alone thinking, thoughts like “We cannot dedicate, we cannot consecrate, we cannot hallow this ground,” and find instead that “What these dead guys did here was pretty cool.  We’re super-excited to be here at Gettysburg!” is more natural and meaningful to us.

This kind of informal language isn’t just “different” from the classical prose of English past.  It is smaller.  Less comprehensive.  Less full, less powerful, less significant.  The full force of vigorous, clear, classically-patterned English dwarfs it and completely contains it; the speaker and reader who has made the effort to understand every word and clause of the collected correspondence of Thomas Jefferson and John Adams can swallow informal English like a baby-spoonful of applesauce.  Chewing is not required; we can grasp the idiom of “we’re super-excited!” without difficulty (and find it rather un-satisfying when we compare it to other forms of English.)  But the capacity to digest does not work the other way.  The toothless 8-month-old has to have Gerber mush, and cannot do anything with a plate of Thai gang ped or a perfectly seasoned and rare-grilled ribeye.  The young person who only speaks and is spoken to in the dialect of informality CANNOT understand the language of Jefferson and Adams at all, and comes to think that thoughts expressed in it must not actually be meaningful.  He or she is trapped in the little yellow circle above.

The condescension of consciously informal English is exactly the opposite of real teachers worthy of the name speak to the children entrusted to their classrooms, the opposite of the way we ought to talk to young people if we want to uplift, ennoble, inspire, exhort, challenge—in a word, educate—them.  If we want to make young people better, we have to pull them up towards something better—and while that certainly doesn’t mean that we should talk at uncomprehending 3rd graders in the most difficult and complex literary English we can muster, it does mean that when we speak to children, when we write for them, and when we assign things to them to read, we should be aiming ahead of them, as if we were training a wide receiver to run faster and strain harder to catch the football. To offer another athletic analogy, we must give students a high bar that they can clear only with strain and labor, not one so risibly low that it makes the high jump unworthy of an attempt.

The great cultural analyst and media critic Marshall McLuhan (1911-1980), who was not incidentally a great scholar of literature and historian of the liberal arts, once observed that we human beings are always oblivious of the ways in which our technology will change our lives in ways we do not foresee, let alone intend.  As an example of this, we are of course blind to the fact that language itself is a technology of communication, and that different modes of language have different effects upon us.  The “technology” of the consciously condescending linguistic informality such as we find on the White House web site is one that has a short-term intention of getting kids’ attention, at which it may well succeed, though I admit I might be overestimating kids’ taste for such gruel, but the unforeseen larger effect of the widespread use of this specific technology is the suppression of a culture’s ability to use and understand English , and therefore the world, above a 6th grade level.  As McLuhan puts it in chapter 7 of his book Understanding Media, “the numbing or narcotic effect of new technology…lulls attention while the new form slams the gates of judgment and perception.”

It is true that language always shapes us in ways we cannot control, and it is also true that no one by himself/herself is above being affected by the way language is used publicly by entertainers, marketers, bureaucrats, and White House junior staffers.  But it is also true that each one of us has some power to consciously shape the language we choose to use and to be influenced by, and thereby mold our own souls and the souls of others with this proto-technology.

This is why a liberal arts education, with what seems to so many of our contemporary technophiliacs to be ridiculously old-fashioned, places such a central emphasis upon reading, writing, and speaking: educators in this classical tradition want to empower young people to master the first and most human of all technologies, the one upon which all social life depends, the one absolutely indispensable technology, without command of which we become completely unfit for life as free citizens, productive workers, and human beings in the 21st century, at the mercy of others and subject to forces beyond our control and even recognition.

The technology is language, and, to employ the hackneyed phrase on the White House web site, education in the liberal arts must “highlight its power”.

Andrew J. Ellison is a Vice President with the Arizona-based Great Hearts Academies.