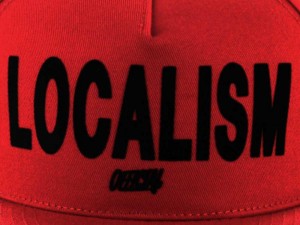 Hidden Springs Lane. It’s not easy being a localist. Vladimir Putin has taken Crimea and many in the West are afraid that he has designs on the rest of Ukraine and perhaps beyond. A Malaysian 777 has disappeared without an apparent trace. Chris Christie, Hillary Clinton, Jeb Bush and others are jockeying for the pole position for the 2016(!!!) Presidential campaign (I will leave aside for the moment the rather interesting question of why anyone would want the job in the first place). In short, the concerns with which we are constantly inundated by the media are, quite naturally, national and international. This can, pretty effectively, occupy our attention and concerns in a way that leaves local issues in the backseat.

One thing these on-going stories have in common: there’s not a lot any one of us can do about them. Sure, one could picket the Russian embassy or write a letter to a senator. One could start campaigning for Rand Paul. Or one could, like Courtney Love, pore over satellite images and find the remains of flight 370.

But let’s be real. These stories, for most of us, are diversions. They help to fill our time with a sense of importance while in actuality they merely serve to distract us from our work, our play, and from meaningful interactions in our own communities.

However, if diversions are a danger to the localist, there is another pitfall that is equally dangerous and much more insidious. I mean that self-conscious localist for whom all of life is intentionally and self-consciously seen through the grid of localism. Such a person consistently asks himself if his practices, habits, and even thoughts conform to some abstract standard of localism. When cast in such a context, localism becomes merely another ideology for an ideological age. It is another “life-style choice” for those who happen to groove with a localist aesthetic. Such insufferable ideologues stroke themselves for being “more local than thou” while foisting guilt trips on the less pure. If diversion is a challenge to effective local action, localist ideology is a self-righteous cancer to be avoided at all costs.

Fortunately, localists have resources all around us. True, localism, as opposed to our globalizing, centralizing, homogenizing ways is, in some ways, an emerging alternative that is only now being discovered and articulated. On the other hand, localists have resources that stretch back into the distant past of human history. Yes, the empire builders have always been among us, but so too there have always been those inclined to think and act on a more modest scale, a scale informed by the standard of human flourishing. Such people cultivate the disposition to think primarily in terms of quality rather than mere quantity and as a result can better distinguish between alternatives. They can speak of the good, the true, and the beautiful rather than merely the big, bigger, and biggest or the new, newer, and newest.

So where does a localist begin? Or, perhaps, how does one become a localist? The answer is, perhaps, all too obvious. The first step is to go home or stay put. Repatriation is an obvious answer for some. Yet, it assumes that there is a place to which one can return. And by place I don’t simply mean a geographical setting. A place, of course, includes a geography, but it also includes a community of individuals as well. If one’s home place remains intact, going home should be a serious option (although there are other considerations that cannot be ignored). On the other hand, for many, a home place no longer exists. The people have moved on, and all that is left are memories. In such an instance, going home isn’t a real option; however, staying put is. One can decide to settle. One can be (in the words of Wallace Stegner) a sticker rather than a boomer. Settling changes one’s perspective from a transient short-timer to a person committed to a community for the long haul. Committed citizens see the world in starkly different terms than do short-term occupants. And this change in perspective makes all the difference in the world. It transforms a person from an opportunist to an investor. From a resident to a neighbor. From a critic to a lover.

If you spend much time consuming the media, it will end up consuming you. This is not an appeal to ignorance or withdrawal. It is, however, to say that to be informed is not the same as being obsessed. It is not the same as being stupefied by endless cycles of the same. It is to shun the diversions that keep us from attending to the most important things that, conveniently enough, are generally right under our noses: our families, neighbors, friends, our local communities.

The glorious fact of our diversity necessarily precludes any localist formula. The particulars will vary according to each person and each place. For me, I hope to get a few more fruit trees planted this spring. And a bigger garden. 50-60 chicks will arrive soon. We’ll butcher them a few months later and fill the freezer. I’d sure like to put in a small vineyard, but I’m not sure it will get done this year. We’ll do our best to support local businesses. I’ll continue to coach the AAU basketball team and teach the class for homeschool high-schoolers. There’s always plenty that needs doing.

We all have our various callings, and to be sensitive to these is part of the work of wisdom. If we neglect the people and places to which we are called, the neglect will be palpable and the fault will be our own. Being a localist isn’t easy, but it’s not as hard as the alternative.