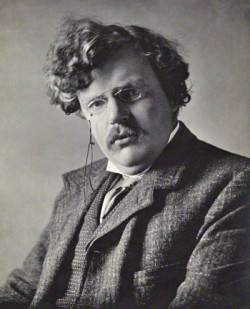 I once knew a woman who met Chesterton. It was a brief meeting in the 1920s when she was a girl of about ten or so. Her older sister invited her to go into London to hear the great man speak. Afterwards, her sister asked my friend, What did you think? She replied, “I think he looks like a big red lobster.”

Our mental images of Chesterton differ, certainly. And it’s a risible proposition, this article’s title, as though it were possible to capture such a character, oversized in several dimensions, in such a small space. As Dale Ahlquist once described him:

When he walks through the door, the first thing we notice is that he fills up the room. Of course, he weighs three hundred pounds, but his height is even more extraordinary than his weight. He is six foot four, but he seems even taller. He is a giant. But he is no Goliath. He is actually an overgrown elf. He casts a spell, and the spell is called joy. It is something we have certainly felt on some occasion, but this is something that sweeps into our souls. His huge body shakes with laughter. Laughter blows through his moustache. “I suppose I enjoy myself more than most other people,” he says, “because there’s such a  lot of me having a good time.” (Common Sense 101)

Chesterton’s joy is no doubt part of the rationale for his cause for canonization, currently underway. (Saints, contrary to popular impression, are anything but dour figures.) Yet not so long ago, especially before the wonderful work of the American Chesterton Society in popularizing GKC’s ideas, his reputation had fallen into a slump, leaving him categorized as rather an old-fashioned sort of Catholic, too much the apologist, too hearty, too William Morris/pre-Raphaelite to be very interesting to us hip modern folk.

This “Toby jug” Chesterton is the one with which the late literary critic Hugh Kenner begins his consideration of the true greatness of GKC’s writings in his first book, Paradox in Chesterton, published by Sheed & Ward in 1947. The slightly dizzying introduction is by a friend of Kenner’s, the still youngish Marshall McLuhan, under whom Kenner had studied at the University of Toronto.

I mention the book because I find convincing its argument that Chesterton is “not so much great because of his published achievement as great because he is right,” as Kenner puts it. That is, he was not a poet but a metaphysical moralist whose special gift was his metaphysical intuition of being. And his special triumph was his exploitation of paradox to embody that intuition.

After all, Chesterton did not make paradoxes, Kenner argues, he saw them. He explored paradoxes as a means to truth, not through superficial playing but as “an intense plumbing among the mysterious roots of being and language.”

After all paradox is very much part of Christian tradition: think of the dying god, the child king and even the loving of one’s enemies. Chesterton did sometimes make puns merely for effect (although he liked to note that the Church itself is founded upon a pun: Tu es Petrus), he is usually paradoxical for a point. His goal is to liberate men from the strange predicament of both seeing and not seeing due to a kind of mental inertia. We have a need to see things anew, he believed, with a metaphysical art of wonder.

From such intuitions, it follows why GKC had such a love for small things—small countries, toy theaters, neighborhoods, etc. The world that is small, he said, can be full of friends.

For FPR readers, I will spend my remaining few hundred words on the essential GKC as a social theorist, a dimension in which his contribution to sanity is often skimped. And yet his prescience is remarkable.

“Most modern freedom,” he wrote in What’s Wrong with the World, “is at root fear. It is not so much that we are too bold to endure rules; it is rather that we are too timid to endure responsibilities.” He adds in another place, “The overwhelming mass of the English people at this moment are simply too poor to be domestic,” referring here to the lack of property ownership at the time.

And yet any opposition and rebellion we might mount to the current state of the world depend upon just these two things: property and liberty.

And what liberty did Chesterton claim? The freedom to restore, he would reply, especially to restore the oldest of ideals: the principle of domesticity, exemplified in the happy home, itself the one anarchist institution, older than the law and standing outside the State.

Threatening our homes is something called capitalism which should better be called proletarianism—a condition in which most people have wages because they don’t have capital. Chesterton saw all around him “this more enlightened England, in which the employee is living on a dole from the State and the employer on an overdraft at the Bank.”

The principle of property means, he argued, that every man should have something that he can shape in his own image, as he is shaped in the image of heaven. But no capital means no property.

When things go so wrong, as they did in GKC’s time and continue to do in ours, Chesterton said we need an unpractical man—a theorist, in fact. I think I know just the chap.

An Homage to Chesterton