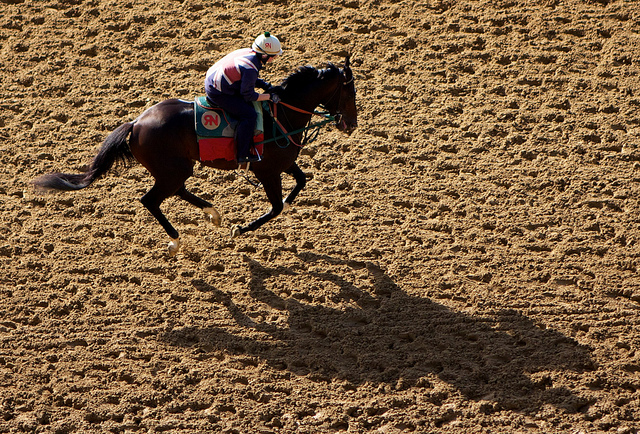 Louisville, Kentucky.  It’s Derby time here. If you have business to do with someone in Louisville this week, don’t expect a quick reply.

I have always run hot and cold on the Derby, with its display of war toys before the enormous fireworks show called Thunder, and its breathless TV coverage of both the horses and the TV actors and professional athletes who come to town for a weekend to bet.  And then there’s the track. Churchill Downs expanded several years ago, with a much-tooted and much-hooted redesign devised expressly to increase the profits of this one big day. The Churchill redo even diminished the twin spires, its signature roofline, and as for the annual temporary stands in the infield, which provide cover for lots of high-paying corporate guests but block the view of half the race from even Millionaires’ Row, they are locally notorious. It may be the greatest two minutes in sports, but at the track, live, you are only going to get to see about a minute of it.

And it’s expensive–for a box seat in the stands, astonishingly so. Such is the price we locals pay for hosting a great race in a venue that is spending a good chunk to lobby the state legislature for permission to become a casino.

Friday used to be “Louisville’s day”–it’s when the fillies’ race the Oaks is run—but Friday is almost as crowded as Derby now.  Louisvillians will still go and still have a good time, but they’ll shrug their shoulders and talk about how much simpler it all was thirty years ago. Wasn’t it, though?

Oh well; whatever the merits of our complaints, they aren’t going to get us anywhere.  Best to make the best of our own Upper South Mardi Gras.  For years my husband spent Derby Day mowing the farm fields, if the weather cooperated, and I’d rather ride a horse than watch one run, but even we can be susceptible. Louisville’s day has moved to Thursday, more or less, and so when we go to Churchill we, too, tend to go earlier in Derby week, to have brunch and remind ourselves how to bet an exacta, or to get up early and see some of the Derby entries getting a morning workout at dawn. It is a beautiful and daunting thing, to watch a big three-year-old galloping along through a misty morning on his slender pasterns. Midweek the track feels plenty festive. You can wear your hat and your bow-tie, and you can lose your money just as effectively as on Saturday.

And then there are the Derby parties, which are the biggest fun of all. I have a happy memory of an elegant one given years ago by a friend’s family at their place in Louisville’s Cherokee Triangle neighborhood—a big brick house with a curving debutante’s staircase, a circular library, a ghost, and a lovely two-story porch on which we were served canapés and mint juleps in silver cups. I was recently out of college, poor as a church mouse and living in a neighborhood to match, and felt all the weight of the compliment of being asked; thank you, Florence Lee.

Now I go in khakis to a potluck with my oldest friends, where for the last twenty years or so we have had asparagus and strawberries and the cheese grits that my acting teacher Nancy always made, and that her niece makes now that Nancy is gone, and Derby pie, which we refuse to call anything else even though a local baker has greedily trademarked the name, and juleps made with simple syrup and bourbon and lots of crushed ice. As a drink it isn’t very good, but that doesn’t matter—it’s traditional.  Traditionally, it’s made strong, and really, you just need one.

Charlie, our host for the potluck, has an excellent memory, and for reasons only teenage boys can truly understand he spent a good many hours in high school memorizing every Derby winner by date, along with various other essential facts like his jockey, or owner, or time. So every year in between races one or another of us will tap Charlie lightly on the shoulder and say something like “1907?,” with raised eyebrows and an inflected question mark, and then check his answer against the list printed on the side of the souvenir Derby glass in our hand. (Pink Star.  Charlie never fails us.)

And before the race is run, before the favorite is thwarted again or a long-shot is in the money or it rains or snows or shines down on a daytime soap opera star with a thousand-dollar hat; before the winner canters his victory lap and the muddy jockey is interviewed on horseback and the governor hands over the trophy with a speech that is always somewhat obsequious and hence embarrassing; before all of that, everyone watching live or on television gets to hear the crowd of 160,000 sing the most beautiful state song there is. Nothing can ruin “My Old Kentucky Home.”

And when the race is over and dinner is finally served, I will take my cheese grits and go back to sit on the deck with my friend Dr. Bob, and I will listen to him tell me again about growing up in coal country, in a place that’s overgrown with kudzu now; and about the blue Fugates and the blind Fugates, whom finally no one would marry until they all moved one county over and changed their name; and how EKU’s top scholar always used to be a kid from some tiny holler in the mountains, in whom all the good genes in the family had lined up–and other funny, poignant, just or unjust stories of Kentucky history and her anomalies; stories the governor is probably not telling the Japanese investors he is hosting at the track, but stories that make up the Kentucky that has made us.

Here’s to the day.