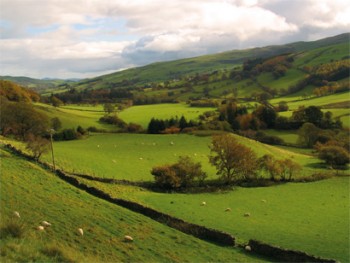 This Christmas my daughter bought for me a CD of Welsh hymns, folk songs, and patriotic anthems, sung by the burly baritone Bryn Terfel. He’s a tremendous performer, apparently renowned for his work in opera around the world. If you want to see merriment and mischief sparkling in the eyes of somebody in the midst of the most strenuous aria in the male repertoire, check out Mr. Terfel as Figaro, singing Largo al factotum in Rossini’s The Barber of Seville.

But when someone approached Terfel with the opportunity to sing these Welsh songs along with a traditional male choir, Terfel seized upon it with a will. It is his first major Welsh album, and at first he couldn’t make up his mind on what to sing. Finally he settled upon the songs that meant the most to him, as he put it – “songs, hymns, and folk music which have been a part of my life and I’m sure of the lives of many others,” “pearls” which he had sung “from Llanfairpwllgwyngyll to Tokyo, from Libanus (our local church in Pantglas) to Carnegie Hall.” It is clear in context that Terfel isn’t making light of the local church or the village of the outrageous name (abbreviated at that; its full name is a great deal longer). He loves the land of his fathers.

One of the patriotic anthems especially moves me. Most anthems laud the greatness of your country. We are the home of the brave. Britannia is meant to rule. When I was a boy, I accepted without thinking much about it that it was good that America was big, fourth among the nations in area, fourth in population, first in coal production, first in the manufacture of cars, first or second in Olympic medals, first in wealth, first in television commercials, first or second in about everything.

But there is something contrived about that attachment to bigness. If you renovate your house and make it three times as big as it used to be, you do not necessarily have three times the home. If you combine ten schools into one, you do not have ten times the single school; you have something different in kind. If you hustle your child into ten activities to make more of him, he ends up vanishing into the schedule, and his home knows him no more. A beauty mark is small. When it grows twenty times as big, we don’t call it a beauty mark anymore. We call it malignant melanoma.

That’s why I found especially charming the song Cymru Fach – translated as “Dearest Wales,” but really meaning “Little Wales.” And Wales is little, little enough to love. Here is the song’s refrain:

It isn’t just a piece of sentimentality tacked on to the end of every verse. It’s of the essence of the song. The singer doesn’t boast of Welsh leadership in the world. He doesn’t long to stand upon the observation tower of the highest office building in Cardiff. He doesn’t love Wales the Superpower. He doesn’t think that the Prince of Wales is some comic-book Savior of the Nations, with a red GW or LL on his cape.

No, when he thinks of Wales, he thinks of things he can love, because they are small – “each mountain, each valley, each river – little Wales.” Sure, he can wander far from those places, but in a moment, in the beat of a loyal heart, he will dream his way back to the fangre fy mebyd, “the sanctuary of my childhood – little Wales.” There’s no diseased gigantism there. It isn’t even the Wales where he grew to be a Very Important Welshman. It’s a sanctuary, a holy place, somewhere protected from the evils of the kingdoms of the world beyond, and all their pomps, and all their empty promises. It is a sanctuary for a child, too, someone little enough to love the rocks and rills, and not to think of them as annoying things to clear away for building a shopping mall.

In other words, if you really love a place like Wales, you will have made yourself great enough of heart to see through the emptiness of Big.

Yet man has a fascination for Big. It is where he turns first for his false gods. Think of the pyramids, those massive slave-built tombs, where the divine pharaohs were to assume their big places in the world beyond. Think of the Sears Tower, now the Willis Tower, that massive glass and steel monument built in homage to wealth. Think of the kingdoms of the world laid out before the young carpenter and his would-be campaign manager.

Christians pay homage to that mysterious God who made himself manifest to the prophet not in the big things, though He could have done that and sometimes did, but in the still small voice. He chose not Babylon to bring His law to the world, but the little no-account children of Israel. He was born not in a palace but in a stable. His messengers were not the scholars and statesmen, but some fishermen, a tent-maker, a tax collector, and women whose testimony could not be accepted in a court of law, for the world that could not save itself by its vast wisdom must be saved by His divine foolishness, for the foolishness of God is wiser than men.

What happens when a once Christian nation forgets the child in the manger? The Big returns with a vengeance. All of the great miserable movements of the last century were conceived as giants, plodding, wrecking, heedless giants, obliterating every small precious thing in their way. Down comes the giant foot, and the neighborhood school is crushed to splinters beneath. Over the land sweep the ideologues like locusts, and they leave no stalk of corn standing; and suddenly simple and innocuous folkways are declared “unconstitutional,” or not in harmony with global standards.

No one can in fact love “the globe,” because it is but a Big Abstraction, not like the earth beneath our feet, or the stars above our heads. Love is supplanted by a passion for some man-made idea to be applied relentlessly and ruthlessly, to which anything may be sacrificed, from the life of a baby to the common good itself. No one can in fact “think globally,” but man in the grip of gigantism regularly forgets the local, which is his business.

No one can love Wales, and wish that it were just like the United States, or any other place in the world, or all other places in the world. To the patriot, the very rocks and rills of his native land are precious. They speak to him. If they are black with coal, then in his eyes those black lumps glint like diamonds. If the mountaintops are barren, the lichen upon the bare rocks are not yellow but gold. If the streams are sluggish in the lowlands, so much the better for catching bass on a lazy afternoon.

Beloved country! To love your home because it is your home is a grand thing, fit for someone great of heart. Let the petty and meddlesome go for the globe.