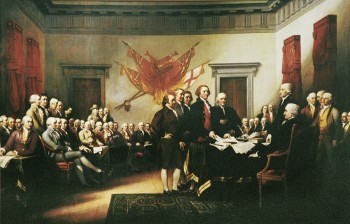 Hidden Springs Lane. The concept of equality lies at the heart of the American system. School children learn by heart (or used to) those memorable lines from the Declaration of Independence: “We hold these truth self-evident that all men are created equal.” Tocqueville understood that equality is the essence of democracy and that while freedom is certainly preferable to servitude, either is possible in the context of equality of conditions.

If you listen to the political discourse today, the idea of equality is everywhere. The side of any debate that can claim to be defending equality, or fighting to advance the same, holds the rhetorical—and presumably the moral—high ground. Equality, we are given to assume, is the political virtue at the heart of the American system and those who denigrate equality or seek to limit or even temper it are seen as enemies of an unmitigated good.

However, are matters really so simple? Is equality always good and its opposite always evil? As with most things, the matter is more complex than initial appearances.

It is clear that equality has been a great boon in many ways. When Jefferson wrote the Declaration he was painfully aware that the issue of slavery offered a constant reminder that the ideal of which he wrote was not yet realized. The end of slavery represents a huge advance for equality. Others soon recognized that equality was compromised when women did not enjoy equal capacity to lay claim to property or access the legal system. Again, plenty of progress toward a good ideal. The civil rights movement is another example of equality advancing a morally salutary vision.

Russell Kirk argues that equality, as the Founders understood it, meant two very precise things: equality before the law and equality before the judgment of God. In this vein, some have argued that humans are equal in terms of inherent dignity or equal in moral worth. This sort of language is useful if only because it reminds us that equality is a moral concept and that we inhabit a morally structured world or at least humans are moral beings with both moral duties as well as moral privileges.

But it is also the case that the concept of equality, when pushed, can actually undermine the moral context within which it makes sense. All moral goods must be held in a context that is proper to themselves and in relation to other goods. To absolutize a particular good necessarily compromises other goods and in the process the absolutized good actually becomes a morally bad concept. In other words, a good concept can, if not held in check by other goods, become deformed. When a deformed good is pursued broadly it can be socially destructive. Such is the case with equality today.

When equality is absolutized it becomes increasingly difficult to make any distinctions at all. If all people are equal, then surely the thoughts and desires of all people are equal as well. If Susie thinks one thing and I think another, we may disagree, but we learned to blunt this hard fact by taking truth less seriously: well, if it’s true for you, that’s fine. So too with desires. If Joe wants one thing and his desire runs counter to my desires, we learned to shrug our shoulders and in so doing tacitly claim that all desires are essentially equal.

But if the idea of equality is rooted in Christian teaching, then it is rooted, at least historically, in a moral framework that includes a morally structured reality created by a God who seems to be quite concerned with moral categories. Equality, at least as we have inherited it, only makes sense in the context of a universe where moral categories really exist and those categories can be known and articulated. It just doesn’t work to make a strong claim about the equality of all humans and to simultaneously affirm, by word or deed, that all thoughts, desires, or actions are equally good. Some thoughts simply represent bad thinking. Some desires are disordered. Some actions are evil. We can make these kinds of claims because we live in a world where we can legitimately claim that humans possess inherent moral value and therefore all are morally equal.

But the rhetoric of equality has passed beyond the mutual shrugging of shoulders. Those who seek to absolutize equality have in our day become the moral crusaders who seek to deny the good intentions or even the inherent goodness of any who claim that equality, itself, is a limited concept. To claim that there exists a hierarchy of moral goods and that equality must find its place within those goods and be limited by them is to deny the truth of the absolutized version of equality. And this is the rub. By embracing an absolutized version of equality we have opened the door to moral stupidity. We have become morally stupefied. In such a context, the ideal of equality itself will eventually serve only as a pretext for the domination of one group by another. Moral categories then become merely the camouflage of power.

A Note on Right, Left, and Lasch at the Present Time

Nihilistic Pieties: On the Souls of Woke Folk