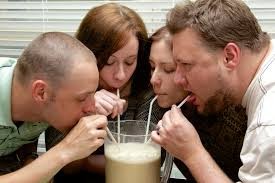 Hidden Springs Lane. What if you never had to worry about food again? Possible answers: 1) Wow! Think of all the time I can save, all the hassle of shopping, cooking, eating, and cleaning. 2) But isn’t food and eating an important part of being human? What would become of our food culture, the practices and pleasures tied directly or indirectly with food production and consumption? 3) Ghosts don’t worry about food. Maybe I’m dead.

The makers of Soylent want you to re-think food. The name alone will give many the willies. Who can forget Charlton Heston’s final revelation in the film Soylent Green? I suppose this passes for Millennial cheekiness or irony or some such.

The first image is a stylish, active-looking young man in a hip kitchen pouring a beige liquid from a sleek pitcher into a drinking glass. “What if you never had to worry about food again?” That’s the question greeting the viewer. It is meant to entice. Click on the short video. Herein you will be confronted with space age music [think Dinsey’s Tomorrowland] and a woman’s voice:

“Soylent began as an idea to create the ultimate food. The goal wasn’t to replace food [images of traditional food], but to provide [images of scientists working in a lab] a better alternative to what we eat.” [image of rather unappetizing food on a plate]. So far all the images are black and white indicating the backward and outdated nature of our current food practices.

Next, we cut to a young man in a blue dress shirt [we’ve entered the modern world of color]. His voice is confident as he informs us that it takes a new perspective to see that “food really is made out of chemicals [Merely chemicals]. It is reducible, and we can build it back up, and we can change it, and we can make it better” [our designed food is better than the crude stuff God makes].

The woman’s voice again, and again the thick beige liquid is oozing into a glass: “Soylent is an alternative to traditional food that gives people a convenient, affordable, and healthy way to fuel their bodies.” Furthermore, it’s a “sustainable food source” and is “designed to keep the human body in a balanced state of ideal nutrition” [young man takes a sip—he’s smiling at his computer. Of course, it’s a Mac].

Back to the young man in a blue shirt who, we learn, is Rob Rhinehart, Creator of Soylent. He tells us that he’s an engineer who learned how to “break problems down…Everything is made of parts. Everything can be broken down.” [Including, it would seem, your meal and your body. He doesn’t mention if your soul is included in this reduction].

Woman’s voice: “Unlike most other foods, which prioritize taste and texture [unnecessary bits of pleasure demanded by those who don’t understand the purpose of food], Soylent was engineered [it’s better than natural, accidental food] to maximize nutrition.” We are told that this product is the result of extensive consultation with scientists who have designed Soylent to provide everything that humans need to thrive.

Back to Rob Rhinehart: “We know what we are made of and that’s what Soylent is.”

Woman’s voice: “Using Soylent as a resource means you can take the time you would normally spend preparing, eating, and cleaning up after meals and put that time into other areas of your life [woman kick boxing].

Packages of Soylent are mailed directly to you. All you do is add water to the powder, mix it in a blender, and drink up—a complete day’s worth of nutrition is ready in less than three minutes.

Rob Rhinehart: “Your body certainly learns that this is a very nourishing substance [in other words, it doesn’t taste very good or satisfy like food does, but your body will learn to like it].

Woman’s voice: “Hundreds of people have been living on Soylent for months [this is not just a quick meal; it is a new way of living]. Because Soylent’s is an open source formula, enthusiasts have been working together to improve the product. “Soylent gives you the freedom to live life the way you want to live” [and this, apparently, does not include gathering around a table with friends to share a meal, for whatever Soylent is, it does not seem like something to share with guests].

A couple of thoughts:

This looks like a great product for the occasional meal on the run or for backpackers who need to carry lightweight food. However, that is not the vision marketed by the folks at Soylent. This product is held forth as a solution to the problem of eating: What if you never had to worry about food again? But is eating a problem demanding a solution? True, eating well (in the old-fashion sense) does require time and effort. It requires work to shop for the food, prepare it, serve it, eat it, and clean up. Many of us would probably love to have a private chef to prepare the food and then clean up afterward. But, at the same time, most of us would be loath to give up the pleasures of the table. Furthermore, many would hesitate to relinquish the process of preparation to an “expert,” for there is much joy to be derived from the art of cooking. There is also much joy in working hard to present a beautiful and tasty meal to friends and loved ones. Such work becomes a gift by which others can be blessed. It’s difficult to imagine how mixing powder in a blender would prove conducive to gathering at a common table to enjoy a meal.

But all that romantic nonsense about family meals can be dispensed with. This stuff is efficient. It’s nutritious. It’s the stuff we are made of. Eventually, it seems, the problem of food will be solved by eliminating food altogether. The body is merely a machine demanding fuel. Forgotten in the reductionistic ecstasy is the soul, which is not nourished by beige drinks on the way to cross-training workouts. Souls are nourished, at least in part, by conversations, by laughter, by shared gifts. And, perhaps curiously, one of the ways these good and nourishing conditions are facilitated is by gathering around a common table to share a meal. In fact, it could be said that eating is at the heart of a culture, and to forgo eating is to forgo culture itself. If so, then the full-blown Soylent vision is an anti-cultural vision.

It is perhaps no mistake that the sacrament at the heart of the Christian faith involves a shared meal. Bread and wine. Take and eat. Do this in remembrance of me. A consecrated meal by which grace is poured out on those who partake. At the very least, Soylent can’t do that.