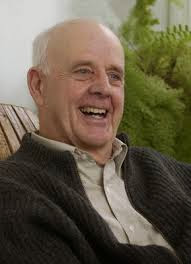 Today, Wendell Berry turns 80. There is much which could and perhaps should be said in honor of him on the occasion of his birthday, for the man and his writings contain multitudes. They don’t contain everything, that’s for certain; Berry is a man who has always understood, and has always fiercely insisted upon, the human virtue and civilizational imperative of limits, conservation, membership, locality, associations, family, belonging, identity, and place. Nowhere in his novels and poetry and essays can you find the idols of modernity–cosmopolitan freedoms, expansive profits, liberated individuals–being lazily praised. Yet within those careful words and humble worlds into which he has invested so much thought and meaning throughout his long life, there is nonetheless admittedly a huge range of possibilities. Berry is claimed by environmentalists, liberals, agrarians, anarchists, populists, conservatives, romantics, and libertarians; I’ve heard him quoted–accurately and approvingly!–by revolutionary socialists holding marching under the banner of Bakunin, radical Tea Partiers waving the flag of Jefferson, and Catholic home-schoolers invoking the principles of Chesterton. In some ways that is simply a testament to the power of his ideas. He is one of the greatest living anti-modernists, having held forth, in both word and deed, the viability and value of living a life that prefers tending to the simple (like improving a plot of land in Kentucky) rather than intending something grand (like going out and changing the world). He and his writings are a treasure, and anyone who has been touched by either or both owes him a great debt.

I’ve never personally met Berry, and for one reason or another I’ve continued to miss out on opportunities to do so. (If you can make it to the upcoming Front Porch Republic conference, where Berry will be the keynote speaker, I urge you: don’t be late!). I have, however, been up close to him while he teaches on a couple of occasions, and have learned enormously from discussing his ideas with my students. I’m not alone with feeling that way; look through the FPR archives, and you’ll see that, agree with this or that particular of his many insights or not, the man is as close to a patron saint that the Front Porch Republic is probably capable of having. So the best I can do here is thank him for all the ways he has challenged, provoked, edified, and inspired me over the years, and give him the last word. Others might choose from his poetry and fiction, but I will turn in to an essay of his, one of his greatest, I think:

That there should be peace, commerce, and biological and cultural outcrosses among local cultures is obviously desirable and probably necessary as well. But such a state of things would be radically unlike what is now called pluralism. To start with, a plurality of settled communities could not be preserved by the present-day pluralists’ easy assumption that all cultures are equal or of equal value and capable of surviving together by tolerance. The idea of equality is a good one, so long as it means “equality before the law.” Beyond that, the idea becomes squishy and sentimental because of manifest inequalities of all kinds….If I merely tolerate my neighbors on the assumption that all of us are equal, that means I can take no interest in the question of which ones of us are right and which ones are wrong; it means that I am denying the community the use of my intelligence and judgment; it means that I am not prepared to defer to those whose abilities are superior to mine, or to help those whose condition is worse; it means that I can be as self-centered as I please. In order to survive, a plurality of true communities would require not egalitarianism and tolerance but knowledge, an understanding of the necessity of local differences, and respect. Respect, I think, always implies imagination–the ability to see one another, across are inevitable differences, as living souls.

Prospects for Localism: An FPR Conversation