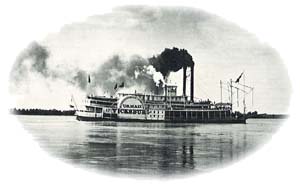 In “Life on the Mississippi,” Mark Twain recounts his earnest desire to become a Mississippi steamboat pilot, and his struggles to master the pilot’s craft—a craft that demanded technical knowledge of steamboat operation and detailed recall of the constantly changing river.

When Twain achieves the mastery he seeks, he expresses a curious sense of loss:

Now when I had mastered the language of this water and had come to know every trifling feature that bordered the great river as familiarly as I knew the letters of the alphabet, I had made a valuable acquisition. But I had lost something, too … which could never be restored to me while I lived. All the grace, the beauty, the poetry had gone out of the majestic river!

As illustration of this loss, Twain recounts “a certain wonderful sunset” from his early days as an apprentice on the river.

A broad expanse of the river was turned to blood; in the middle distance the red hue brightened into gold, through which a solitary log came floating, black and conspicuous; in one place a long, slanting mark lay sparkling upon the water; in another the surface was broken by boiling, tumbling rings, that were as many-tinted as an opal … high above the forest wall a clean-stemmed dead tree waved a single leafy bough that glowed like a flame in the unobstructed splendor that was flowing from the sun.

As a novice, Twain “drank it in, in a speechless rapture” at “the glories and charms” of the river. As a pilot, Twain “ceased altogether to note them.”

Then, if that sunset scene had been repeated, I should have looked upon it without rapture, and should have commented upon it, inwardly, after this fashion: This sun means that we are going to have wind to-morrow; that floating log means that the river is rising, small thanks to it; that slanting mark on the water refers to a bluff reef which is going to kill somebody’s steamboat one of these nights, if it keeps on stretching out like that; those tumbling ‘boils’ show a dissolving bar and a changing channel there … that tall dead tree, with a single living branch, is not going to last long, and then how is a body ever going to get through this blind place at night without the friendly old landmark.

In becoming a pilot Twain mastered a craft whose purpose was to move passengers and freight safely and quickly on the river. His passengers were no doubt grateful for his skills; they certainly wished to move on the river safely and quickly. However important, even primary, this goal was, there were other reasons for travelling on the river. The glories of the river which were obscure to the skilled pilot were still loved and appreciated by the passengers, as were the opportunities to meet and mix with fellow passengers on the adventure. The sacrifice of the pilot preserves and promotes the enjoyment of the river by passengers, who need not spend their journey in fear of death and long delay.

At least Twain was aware that he had lost something important in becoming a pilot. Imagine if he had concluded that the only real knowledge of the river was that of the steamboat pilot, that those who drank in the beauties of the river and the fellowship of the journey were somehow deluded, that they did not understand the “real” river. Twain did not think the job of the pilot was to disabuse the passengers of their quaint loves and shallow understanding of the river; he wished he could join them.

Oddly enough, I am struck by Twain’s capacity to hold firmly enough to his previous love of the river to know that he had lost something. In this there is a strange contrast between the effect of Twain’s mastery of his discipline and the effect of my (at least partial) mastery of my own discipline—economics.  Economics is not as intensely practical as piloting—its primary goal is to understand and predict the economy, not to navigate its shoals—but like piloting, the practice of economics tends to obscure important goods that do not come into focus in its lens, even as it develops valuable insights to make the world navigable. What economics sees clearly is self-interest (understood broadly or narrowly) and patterns of interdependence in markets. What economics misses is genuine community, and the gifts and commitments which make community possible and fruitful.

Although it would have been odd for a riverboat pilot to claim that there was no reality on the river except those phenomena which were essential to his craft, it is not unusual for an economist to act as if there were no reality beyond self-interest. For example, in economic analysis the family is not a communion of persons oriented toward a common work; it is an ongoing self-interested exchange, the equilibrium outcome of strategic give-and-take between husband and wife, spouses and children. There is something gained from viewing marriage in this way—families serve a highly practical purpose in providing stable material and emotional support, even if this is not all that they do. Nevertheless, the method of economic explanation is to relentlessly strip away everything but self-interest, and to treat anything that is not self-interest as evidence that economics has not gone far enough. This professional habit becomes a professional hazard when economists forget or deny that there are aspects of social reality not captured by their models.

I have lived and worked among economists for nearly thirty years, so I know the routine response to what I am saying: economists know that their models are approximations, that there is more to reality than self-interest. I myself have said this to non-economists, and heard it from economists who speak to me as if I do not know the spiel.  And yet, I have been among economists long enough to have seen them repeatedly apply the narrow analysis of their models to their own experience, with a curious reluctance to admit that their experience is more complicated than the models.

For example, I recall a colleague from my New York City days, the adoring father of two young sons. I remember one lunchtime when he spoke movingly of his devotion to them—how nothing was more important to him than their well-being, their happiness, their safety, their success in life. It was an edifying display of love, the sort of speech that inspires you to redouble you commitment to your own family. After having inspired me in this way, the economist paused and, as if compelled by his professional training, added “but, you know, I get much more from them than they get from me.” Similarly, I have heard economists describe even their own admirable sacrifices on academic committees in purely self-interested and cynical terms, as if there was nothing to commend in their contributions.

The inability of the economic approach to capture important aspects of social life is not necessarily a bad thing: the phenomena of social interconnectedness and unplanned order that economists seek to describe is complex, and requires simple models. Nevertheless, the blindness of economists to the existence and importance of social goods and fellow feeling is a bad thing, both for the souls of economists and for those who rely on their advice. When economists fail to see the limitations of policies based on their models, they tend to blame their critics for misunderstanding economics when economists themselves are sometimes to blame for misunderstanding the limits of economics. They are like riverboat pilots who deny the existence of any knowledge or experience of the river which is unnecessary to navigation.

It is fashionable to blast economists for the obstinate narrowness of their social vision, but they are not alone among social scientists in acting as if their view of social reality is comprehensive, and that anything which falls outside of it is somehow unreal and extraneous. Economists are singled out for greater censure because they are more successful—they have a wider audience outside of academia (although behind the walls of the ivory tower, sociology has a greater currency). Nevertheless, there are many rivers in the social sciences, and many blind pilots.

I do not want economists to abandon their models (although there are interesting new currents in the discipline: economists are increasingly open to concepts like reciprocity, social nature, and virtue from other economists and social scientists). Their stubborn emphasis on self-interest may blind economists to community and the social orientation of the person, but it also allows economists to spot unsustainable reforms and opportunistic behavior that others miss. Economists can help policy makers avoid seductive plans of communitarian bliss which are in fact economy-wrecking utopian schemes.

And yet, economists should periodically leave the steamship bridge and join the passengers—enjoy the camaraderie among the passengers, take in the glories of the river, and forget for a brief moment that they are economists. The models and tools will still be there when they leave the party, resume their duties at the helm, and plot the arduous course through the sunken logs and dangerous currents.