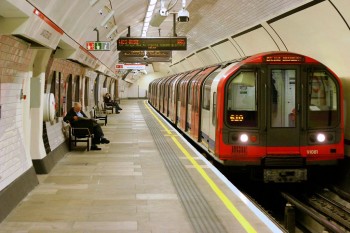 This summer I moved to a new neighborhood that happens to be much nearer the freeway that divides my city. My  house is less than a mile from an on-ramp, though you wouldn’t guess it in this quiet and wooded neighborhood; you can’t hear the traffic on a still evening, and my yard backs up to a seven thousand-acre research forest. Now, I have lived on the edge of this city for sixteen years, and I have always avoided the freeway unless I was traveling some distance and needed to hook up with the interstate at the far end of it; I almost never hop on for just an exit or two. I could say that my distaste for the freeway comes from knowing what its construction did to the old and vibrant black neighborhoods it tore through fifty years ago, but I’m not actually that pointlessly principled. Nothing I do will those neighborhoods back, and I won’t make an academic justification for what is, at bottom, a visceral dislike of divided highways.

Since I moved in, it has slowly dawned on me that I can get practically everywhere faster by taking the freeway. (Likely this would have been obvious to anyone else sixteen years ago: as I said, it’s visceral.) But it has at the same time dawned on me that I might be eroding other, existing neighborhoods by using that freeway—not directly, not by physical or economic means, but simply by changing my perception of them. Where once I drove past strip malls and gas stations, through old neighborhoods holding their ground and neighborhoods that are well on their way to gentrified, noting the changes that happen day by day and week by week, I find myself getting downtown more often by exiting my own neighborhood onto a strip of blacktop that could be anywhere in America and emerging a block or two from my destination. For all that I see of what’s in between, I may as well be asking Scotty to beam me to church, or to the grocery store.

It’s increasingly clear to me that what lies in between matters, deeply. Not long ago I had to answer an icebreaker question: If I were given a free round-trip airline ticket good anywhere in the world, where would I go? It should be said that I hate icebreaker questions, and characteristically I found a way to be contrary. I’d cash in the ticket, I said, and take the train across the country, with no particular destination in mind, stopping here and there in small towns I’d never heard of, eating with the locals and hiking their woods and touring the local museum or seeing the world’s largest ball of twine. A smart-ass answer, as I’m afraid everyone quickly realized, but it’s also true: I’d rather see what’s in between, and I’d rather take my time about it—in theory, at least. But apparently not when I just need to buy some groceries.

When the London Underground opened in the 1920s, the city undertook a massive advertising campaign to convince people to use what was at the time a radically new form of transportation. Like Great War propagandists and the WPA, they turned to posters. The Underground’s advertising posters share with the best advertising art of that era a gleefully innocent embrace of modernity and a self-importance that would be bombastic were it not so cheerful, and they are so stylized as to evoke a kind of magical reality divorced from the real one: lovely to behold, useful in advertising, dangerous in the real world. The posters don’t merely suggest that it’s reasonable to travel by Underground; they imply that it’s magical.

In the world of advertising, at least, the Underground promised instantaneous access to the wonders of the city. There’s a five senses series of posters about seeing, hearing, touching, smelling, and tasting the riches of London; there are invitations to go shopping and a pair of dreamy images of summer days and summer nights. Yet other posters admit that not all is well within the city limits. Here the Underground is “the open gate that leads from work to play,” a passage away from a blocky, smoky, smoggy city to a sweeping dance of playful children: 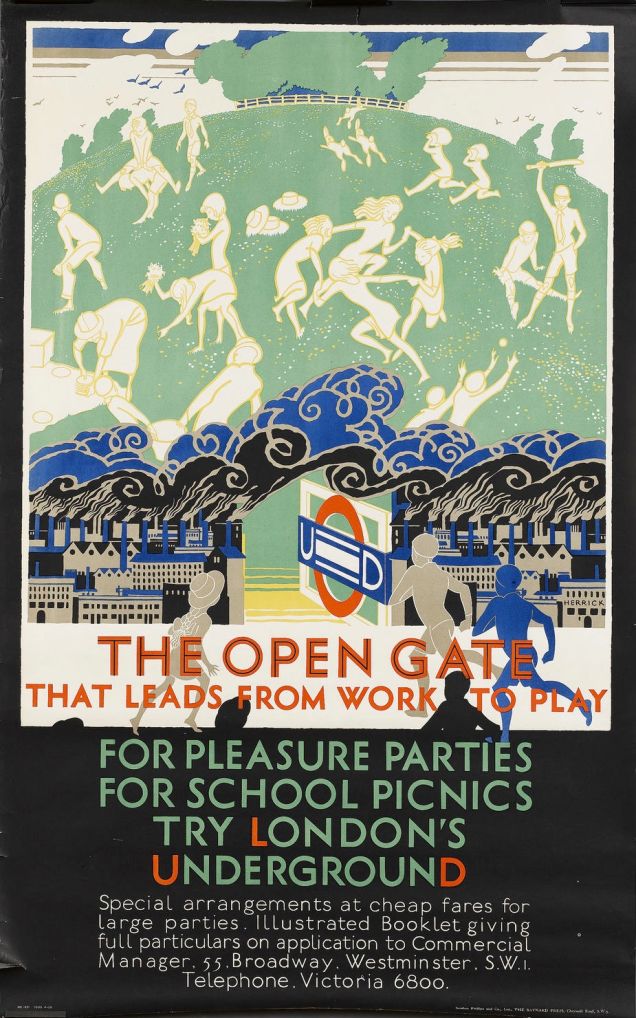 The children are nearly faceless, cloud-white with golden outlines as one might draw angels. A vision of heaven, perhaps, in a park. Go further and the city disappears entirely. “Underground for picnics and rambles,” another poster promised. Only “30 minutes from town to open country.” The delights of city and country alike lay before you like so many shucked oysters. Simply go underground, the city disappears above you, and you emerge away. We’re asked to imagine an almost magical transport from one place to another with no experience of distance or division, no sense that anything lies between the two, not even a fence or a border. That other place—the park, the museum, the country—is neatly disconnected from our own place and therefore, in effect, from any real place. It presages the era of air travel, when travelers disappear into little boxes and re-emerge into others which, not coincidentally, have become as placeless as any that humans have ever conceived.

It also presages my own intra-urban travel by freeway. And I’m finding that this isn’t merely an academic argument. Not only do I miss the traffic, the strip malls, the gas stations, the billboards—all of which could as easily be somewhere else anyway. I also miss the old neighborhoods holding their own against both decay and gentrification, paint peeling and sidewalks cracking but roofs square and lawns mown. I miss the butterfly garden by the corner house. I miss the luxury hotel going up in the vacant lot. I miss the students riding their bikes home from class, the ice cream truck parked in front of the high school, the fiddler busking, the homeless guys hanging out in front of the coffee shop. I miss, in short, everything that is real about the city, and everything that connects me to my destination, physically and economically and spiritually. And I wonder what the consequences might be.

I wonder particularly in regard to my church, which is small and grounded in its neighborhood. Once it was home to the families of textile workers from the mill across the street; now that mill is apartments and university satellite offices, and the church serves the university’s students and faculty as well as the homeless people who live in the woods across the railroad tracks. If I drive to church on the freeway instead of going past the campus and the old mill building and the slightly dilapidated neighborhood behind the liquor store and the new shopping center, will that change the way I think about the church, the community, my obligations as a neighbor? Who would my neighbor be, in that case?

And then I think about other places I drive in the city. I drive to the farmer’s market by going north of downtown, along a variety of residential streets, past a school and some businesses on blocks that urban renewal hasn’t quite reached. But I might take the freeway downtown and drive past shiny office buildings, expensive lofts, and trendy bars. They get me the same place. But would it be the same place in my mind? Would my interactions with it change as a result? And would my interactions with that place, combined with those of hundreds and thousands of others, over time, shape the character of that place?

I suspect they must. It seems to me that if I see a place without context, I am likely to get only an initial impression that confirms my existing biases. And that’s dangerous both for the place and for me, just as if that place were a person.

Time is precious, and sometimes you just need to get dinner on the table. But how badly do I need to save five minutes? I’m looking for somewhere to hold my ground: once or twice a week, perhaps, I’ll make a point of traveling by crooked lines. And if the traffic is just too much for me, I will have to think more seriously about buying a bicycle.