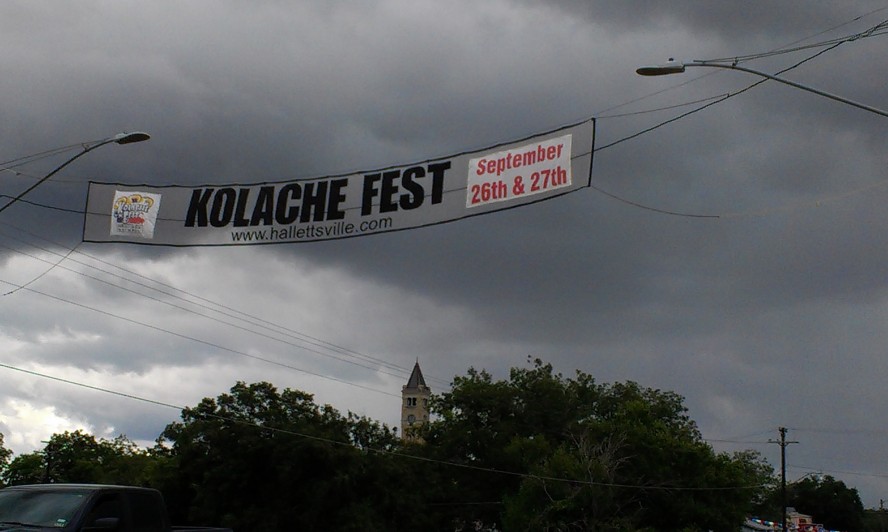 In some ways, the little farming community of Hallettsville where I have spent a writing sabbatical still resides in a simpler time. Czechs and Germans came in the 1800s and brought a culture that remains surprisingly stable. My Dworsky forebears, speaking German while having a Czech surname, fit right in. Today, the stately 1897 courthouse clock tower records the march of time overlooking a square that still contains a bank, two stores for hardware, one for furniture, another for flowers, a single screen movie theater that shows every family flick it can, and Novosad’s Market, one of the best barbecue joints in Texas. The sign at the independent Hoffer’s Grocery advertises “Home Grown Veggies” on one side and “Polka CDs Sold Here” on the other. It’s the only place I’ve ever seen where a McDonald’s has gone out of business.

Maybe that’s because there is just too much good slow food around. Hallettsville is arguably the buckle in what I have dubbed the Kolache Belt. Bordered to the north by the Baptisty Bible Belt and to the south by a dominant Hispanic culture, the Kolache Belt is a narrow (by Texas standards) swath of distinct Old World influences stretching from the Texas coast south of Houston to the Hill Country north of Austin.  You’ll find sausage (the best worst around) and strudels and lots more in addition to the brisket and kolaches. And if you don’t know about the Czech fruit pastry to which I refer, feel free come by at the end of September for the Kolache Festival and get educated—assuming you are not at the Front Porch Republic conference with me.

Mayberry deputy Barney Fife might do a hilarious double take when faced with family names like Bludau and Zaruba, places like the Vysehrad School, or byways such as Vsetin Road and Kroschel Avenue, but he would still feel at home in many ways. You can get your hair cut downtown at an actual Floyd’s Barber Shop and then hear a real Andy Taylor dispense wisdom not far away, albeit as pastor of the Lutheran Church not sheriff. A non-fictional proponent of rural communities like Wendell Berry would no doubt approve of the newspaper in the next town up: The Schulenburg Sticker. And, to a large extent, the folks around here have stuck around, or at least come back around.

Lest I lapse even further into a sort of “crunchy con” chamber of commerce pitch, know that the 24/7 Walmart is doing just fine and lots of folks prefer Bud Light to the Shiner Bock made 12 miles away. Speaking of liquid refreshment, the little grocery store advertises “Nestle Water” next to those local veggies—and likely with good reason. While I am drinking what comes from the old well (after filtering and crossing my fingers), high ammonia levels were found in the blood of one neighboring mom, pushing that young family to the bottle.

It’s no secret from whence that contamination would come. The 1930s Progressive Farmer magazines in the attic of this old farmhouse testify to the wonders of far-from-organic agriculture, and they’ve been believers around here for quite a while. Beautiful sunsets silhouette the fertilizer and chemical depot offering better living through chemistry just to my west. Yet, the owners are also the sort of folks who, after some timely precipitation, will forgo advertising the latest and greatest and simply say, “Thank You God for the Rain” on their sign.

I should also mention the rumble. Upon my arrival, I would walk outside almost every night to reacquaint myself with the stars that had been lost to the lights of D.C. It was quiet, but not silent. I could hear what sounded like a distant train, yet Hallettsville is not a rail town and this locomotive never seemed to move on, leaving a faint but unavoidable chug-a-da-chug-a-da-chug-a-da in an infinite loop.

Further investigation soon identified the source. One pasture over a large compressor rumbles on a treeless pad of brown ground that sits like a Band-Aid over a deep pinprick into the earth and upon which a web of vein-like pipelines converge. The wafting smell of rotten eggs confirms that the sign warning of poisonous sulfuric vapors is well placed. The “gas plant” as it is called by my country cousin operates without much human interaction, save for the occasional visitor to make sure that the rumble remains.

This facility is an ongoing legacy from a fading play that is almost four decades old, but the rumble now has competition from what was once a sleepy two lane highway hosting more tractors than tractor-trailers. Today, though, massive wide loads move the tools of fracking into place just down the road and take out the mucky water that results. Following a path blazed by the check-writing and lease collecting landmen a few months ago, drilling rigs are steadily on an easterly march along the prolific Eagle Ford Shale to the edges of town.

You might now be hearing the Jaws theme in your head, but my intent is not to set an idyllic scene and then move a dastardly industry in for the kill. No, the story is more complicated than that.

True, the trucks can be a deadly menace. Just a few days ago, one hauling drilling pipe fatally collided with a hybrid just a half mile from the farm, an occasion that will likely be repeated (though the local parking lots would indicate the next accident will probably involve a pick-up rather than a Prius). Plus, with lax enforcement and more than a few Bubbas willing to take a short-cut, I have no doubt that some not inconsequential environmental crimes are occurring. I have already seen a rig clearly designed for solid loads sloshing what was probably a witch’s brew of liquid wastes onto the road from under a tarp that was anything but water tight. Drugs and the other sorts of illegal activities that can accompany a rootless male workforce are also a concern.

And what is legal is enough to make you shake your head. The flaring infernos at some wells can look like venting from Hell itself, but the bean counters have apparently decided that profits are maximized if they just take the oil and burn the gas as an uneconomic by-product. An orange glow along the horizon may soon join the rumble to complicate midnight star-gazing.

All that said, what lies beneath may well be one of the reasons for the area’s relative cultural stability. Many of the longstanding and land owning families—including my own—received just enough from their mineral rights in the past to, well, keep doing what they were doing, but with a helpful buffer against the risks of dryland agriculture. My great-grandmother and her children worked hard to keep the farm going after my great-grandfather died far too young just as the Great Depression was rearing its ugly head. There were surely good years along the way, but neither corn, cotton, tomatoes, nor dairy cows ever proved to be highly lucrative enterprises. When the first gas royalties arrived with numbers never seen on a check before, family lore says my great grandmother asked, “Are those real dollars?” Not much changed with her, though. She still made rag-rugs and pot-rests from bottle caps.

The temptations that flow up from deep underground are tempered by that which is deep in the heart. Kolaches go with Catholicism. On the main drag outside of town there’s a roadside shrine where a local man says the Virgin Mother appeared and miraculously got his tractor unstuck from the mud in 1986. Three miles from my house sits another remembrance of St. Mary, a historic wooden church with a beautifully painted interior. It is said to be the oldest rural Catholic parish in Texas, boasting a parishioner who fought at the Alamo. I sometimes stop there for a prayerful pit stop in the middle of a run, occasionally taking a sip from the outside faucet and perhaps tasting a drop of recycled holy water that baptized my grandfather over a century ago.

A level of piety still covers much of local life. That probably explains, at least in part, why it can be hard to guess who has hit the latest mineral leasing lotto and who has not. Part of loving your neighbor is not being too showy with your money, a sentiment unfathomable in the “super zip” suburbs of northern Virginia where perfectly fine homes are routinely torn down to make way for the next ego-expressive multi-million dollar monstrosity. Here, there are some nice but not ostentatious new houses going up and a few more shiny Dodges and Chevys on the road these days, but you shouldn’t jump to any conclusions about the net worth of the old couple in the beat up Ford either.

That gives me some hope that these coming good times won’t roll away what makes this little town of 2,550 unique. Even though the cultural forces of cable and cell phones also lob their mortars here like everywhere else, there seems to be a real chance that years after my short stay is done, Hallettsville will still be a special place with land, people, and values that won’t be busted by any boom.

John Murdock has written from a century old family farmhouse during the past year after a decade plus of big city lawyering in our nation’s capital. His online home is johnmurdock.org.

Adapt or Die: Kunstler’s Guide to Living in the Long Emergency