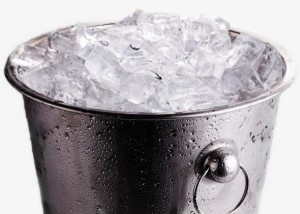 I can’t say I’m overly conversant with the history of charitable giving in America, but I can’t recall something taking off quite like this “ice bucket challenge.” In the unlikely event you haven’t heard of it, it involves, as nearly as I can tell, pouring a bucket of ice over you head in lieu of donating money to ALS research, and then challenging friends to do likewise. They can opt out of pouring cold water on themselves by way of making a donation to the ALS Association, which as of September 2 had raised over $100 million in donations. I assume that some of the people who pour water on themselves give anyway.

It’s hard not to admire the genius of the strategy. It has raised record amounts for ALS research in a breathtakingly short period of time. ALS is obviously a horrible disease, and research into it is a desirable social good. Still, there are reasons to be concerned. Perhaps the influx of research dollars to ALS comes at the expense of other public needs, some of which, frankly, are more widespread and socially consequential in their impact. Word is that less than half of the raised money is going to actual research, a good deal of it going to administrative and other costs. And, for many of us, there is the moral issue concerning the kind of research being done. My understanding is that the ALS Association provides financial support for embryonic stem-cell research, which I regard as morally impermissible.

There has been plenty written already on these issues. I have little to add to them. But there is one angle I haven’t seen anything about, and that is the view of “charity” at the heart of the challenge. No one has “challenged” me to it, but I can tell you right now that if you were considering it to save your energy. I won’t be doing it.

The idea is strange at its core. You pour water on your head in order to avoid donating, but more than that, you do it in a very public way. While the challenge may have the tertiary benefit of drawing attention to the disease, what it really draws attention to is the self. This is why it’s an effective approach in the age of social media, the major advantage of which is self-promotion.

The chain effect operates essentially on the principle of shame. “I have performed this good deed, and I challenge you to do likewise, and if you don’t, everyone will know.” It has the scent about it of a kind of mass hysteria: people engage in the act because it seems good, without having to do an actual good deed, or think seriously about the consequences. Attributing motivation to any human action is often tricky, and rarely are motivations pure in the sense they are absolutely good or absolutely bad. Generally speaking, any action has about it a hint or a tint of self-interest.

But that self-interest is simultaneously heightened and occluded by the complexities placed upon action by publicizing and pressuring. To resist the highly-publicized demand to pour water on oneself is to draw attention to the fact that there is some sort of serious deficit in your character. What kind of person doesn’t want to rid the world of ALS, or of evil altogether?

The form of the act should be striking to anyone conversant in Christian ritual. It is a mode of self-baptism, a public cleansing of oneself not for the purpose of actually being good, but for appearing to be good. It draws attention not to God’s atoning love and membership in Christ’s body, but rather to our selves and our own magnanimity. In this sense, it both shames and proposes itself as an answer to shame: don’t perform this act, and you are a broken individual, but perform it and you shall be made whole. It smacks of Nietzsche’s proposal that “Then you look upon your love for your neighbour as a grace? Your pity as a grace? Well, then, if you can do all this, there is no reason why you should not go a step further: love yourselves through grace, and then you will no longer find your God necessary, and the entire drama of the Fall and Redemption of mankind will reach its last act in yourselves!”

We rid the world of evil, but not ourselves of it, because in externalizing virtue we have also externalized evil. Our new baptism is an elevation of our latent narcissism, not an eradication of it. Our charity is corrupted by pride, by drawing attention to ourselves in such a public fashion the act of giving becomes an accessory to our public self-fashioning, which is why the ice-bucket challenge is the perfect ritualized grace of the facebook age.

Such self-fashioning substitutes our public selves for our real selves, deepening our loss of self to ourselves. The prideful display runs contrary to what charity is and ought to be. It is good to be reminded that Christ warned us to “beware of practicing your piety before men in order to be seen by them,” and that when we “give alms, sound no trumpet before you, as the hypocrites do in the synagogues and in the streets, that they may be praised by men.” Rather, when we “give alms, do not let your left hand know what your right hand is doing, so that your alms may be in secret; and your Father who sees in secret will reward you.”

St. Augustine well understood the ways in which our self-understanding and our sense of virtue would be corrupted by the sin of pride. The only way to see ourselves truly, he argued, was to see ourselves as God sees us. Puffing ourselves in front of our fellow men would make us little better, to use St. Paul’s words, than “a noisy gong or a clanging cymbal.” We are noticed, but we have not love.

For love takes no notice of itself. If it were to do so, it would fall prey to self-promotion, to self-interest. Christian theologians have understood Christ’s words in Matthew 6 to attend to the motivation involved in almsgiving, for the motives for an act are an intrinsic part of an act. In order for almsgiving to be authentically liberal, it can not be motivated by demanding public acknowledgement for itself.

This is why charity is fundamentally different than philanthropy. The latter is a love of man that is predicated on love of self. For this reason, philanthropic giving is typically attended by the donor insisting on recognition, for such recognition validates one’s liberality. Granted, this corrupted giving can still perform much public good. Those of us who live in West Michigan are deeply grateful to benefactors such as the DeVos’, VanAndels, Meijers, Princes and others who have built hospitals, schools, museums, concert halls, and so forth that have demonstrably improved public life. Richard DeVos’s philanthropy has done more public good than my private charity ever has. Here at The Porch, we gratefully acknowledge the benefaction of people who make this website and our conferences possible, even if, maybe especially if, they don’t insist on such acknowledgement. There is much that would never be accomplished without the creation of such wealth and the philanthropy of the people who share it.

Such giving should not be lightly dismissed. But neither should it be considered, strictly speaking, as charity. Charity never seeks the easy path. It doesn’t celebrate itself by writing a check. It doesn’t bring comfort to the sick simply by donating money to organizations for indeterminate purposes with unknown effects rather than do the difficult work of sitting down and spending time and wiping the spittle of an actual person. And it takes no measure of itself nor posts itself on social media. Neither does it simply ride the wave of the cause of the moment only to descend back into neglect and forgetfulness.

I suppose I could be accused of a related form of self-righteous posing by publicly defending my refusal to participate. Fair enough. But, sometimes, you just need to pour some cold water on things.