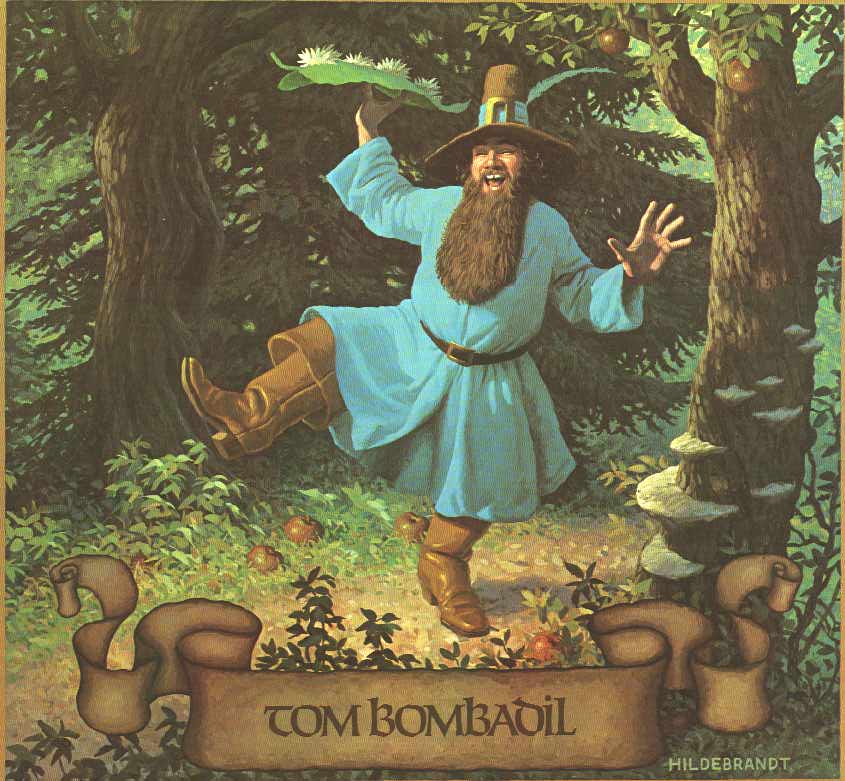 Bright blue his jacket is, and his boots are yellow.

None has ever caught him yet, for Tom, he is the master:

His songs are stronger songs, and his feet are faster.”

Rod Dreher is well known in these parts for his interest in the Benedict Option. I share the interest, but there are times I despair for it. It’s a group effort after all. What do you do when you’re group-less, though, when you’re as alone as Elijah in a cave? What then? When I’m feeling melancholy and all alone, that’s when I pop open a bottle of my best craft beer and I exercise what I call the Bombadil Option.

Everyone forgets about merry old Tom Bombadil. Peter Jackson did. He could find time for videogame eye-candy, but jolly Tom was expendable. Early on in The Lord of the Rings even Gandalf writes him off. It‘s easy to do: he’s a sidelight, a detour, he’s off the main path. What is he in the story for anyway? Local color? Comic relief?

Nope: I think Tom’s the point.

What do you do after you’ve saved the world, when all the derring-do is done, and there is nothing left for which to quest? Ride about aimlessly reliving your adventures like Merry and Pippin—in your old armor, singing the old songs? I sure hope not; that would be melancholy. In the end, as I recall, when his great task was finally done, even wise old Gandalf pays Tom a visit. And there’s that telling reveal when Frodo asks Goldberry who Tom is. Her response?

“He is, “ said Goldberry, staying her swift movements and smiling.

Frodo looked at her questioningly. “He is as you have seen him,” she said in answer to his look. “He is the master of wood, water and hill.”

“Then this strange land belongs to him?”

“No indeed!” she answered, and her smile faded. “That would indeed be a burden,” she added in a low voice, as if to herself. “The trees and the grasses and all things growing or living belong each to themselves. Tom Bombadil is the Master. No one has caught old Tom…. He has no fear. Tom Bombadil is master.”

I try to keep this in mind when the Gandalfs of the world try to send me gallivanting off on an adventure.  I’m not immune, mind you. At times I feel the stirring, and sometimes I even ride off to try and save the day. But eventually I come home again. And after that?—wistfully stare out the window and long for significance?

Or should I gather water lilies for my Goldberry and enjoy her charms; eating the food she has prepared for me and sitting by the fire and laughing as I recall the queer antics of badgers? I think so – because that’s the world I’m made for, the world I go to save when the lust for derring-do sweeps me along. That’s the world I’ve been given to serve as master.

Now, Tom’s not uncaring; it’s just that he cares for what is near and dear. And all the power in the world could not tempt him to leave it. Quests? He takes Frodo’s precious ring and performs a magic trick with a laugh and hands it back to him. Frodo for spite tries to play his own trick and he puts it on. But Tom isn’t fooled and looks right at him.

“Hey! Come Frodo, there! Where you be a-going? Old Tom Bombadil’s not as blind as that yet. Take off your golden ring! Your hand is more fair without it.”

Nor is Tom indifferent; he comes when called. That’s how the hobbits met him; they had fallen under the spell of a wicked old willow. Merry and Pippin were trapped inside and Sam had been the only one to keep his wits. After Sam save him from drowning, Frodo we’re told, without any clear understanding of why he did so, ran along a path crying, “help! help! help!” And that’s when he hears—

Ring a dong! hop along! all al the willow!

And here Tom does save the day. If you’re in the Old Forest eventually you really will need his help—it’s a dangerous place. Many of the residents have grown mean and spiteful, full of envy for things that get around on two legs: Old Man Willow, the Barrow Wrights, and even those “nightly noises” the hobbits are told to ignore while they’re in Tom’s house.

While Tom’s not much for traveling, in another way he does often. Tom goes places without leaving home. He goes down, way down—all the way to the beginning. Once more Frodo asks—

“Who are you master?”

“Eh, what?” said Tom sitting up, and his eyes glinting in the gloom. “Don’t you know my name yet? That’s the only answer. Tell me, who are you, alone, yourself and nameless? But you are young and I am old. Eldest, that’s what I am. Mark my words, my friends: Tom was here before the river and the trees; Tom remembers the first raindrop and the first acorn.”

Now, singing, what does that bring to mind? Ah yes, the music of Illuvatar and the Ainur in The Silmarillion: creation was a song. Tolkien masterfully hides the significance to Tom’s singing—it seems to be nonsensical rhyming along the lines of something by Lewis Carroll. But even Jabberwocky draws on the roots—we know deep down what the frumious Bandersnatch is without quite knowing how we know.

Here in New England we have people with roots that go way down. We still have a few old Swamp Yankees here and there, living in dilapidated homes, some tracing their ancestry back 4 or 5 generations. Some of my parishioners live in homes that predate the revolution by 50 years. Mostly these folks are as colorful and quirky old Tom, but few are jolly. Sadly most resemble Old Man Willow.

I think Tolkien is saying something about roots here. Sometimes rooted people can be very unpleasant, downright nasty. There is more than one way to live from the roots.

For some, roots run deep, but not deep enough. These folks resent everything that moves: the people who have moved away for one. They’re bitter for being left behind, and they blame the leavers for taking what has been lost with them. And new comers only make things worse—bringing their fancy ways, ignorant and presumptuous, driving up property values, and raising taxes, tooling around in their fancy foreign cars taking their fat kids to a soccer practice in the new park where people used to hunt. If roots could kill, these would. I seem to recall Old Man Willow using a root to hold Frodo under the Withywindle.

But longer roots go down to things that don’t change. Those are the roots that Tom knows. He’s in no hurry to get anywhere besides home, because what he’d find when he arrived he’s already got at home. His joy comes from knowing the oldest songs, the songs that made the world, those little ditties that seem like nonsense to people without sense.

Bombadil isn’t curmudgeonly, because he’s like Peter Pan, the boy who won’t grow up. He’s young because he’s the oldest. His songs are the same ones the morning stars sang in the beginning. He knows them because he heard them on the first day. And nothing can master him because any tune conjured up by an old willow, or even the Dark Lord, is just a perversion of a tune he knows by heart. He can sing their songs aright. Tom’s roots are so deep they make him light on his feet – no catching him! His songs are stronger songs, and his feet are faster!

Confession time: most of the time I’m either on a quest, or I’m Old Man Willow, cursing the passing of things once loved. But there are days when I hear an older tune and I feel like dancing. Those days I’m jolly Tom and I put on my bright blue jacket and my yellow boots and I go out to gather water lilies for my lady because I truly have no place to go, and I have nothing better to do.

Community Greening in The Lord of the Rings: Samwise Gamgee and...