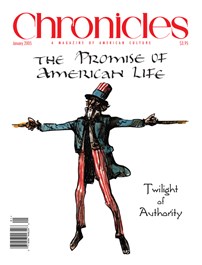 Rockford, Illinois.  After thirty-one years at Chronicles Magazine—thirty of them as editor—classicist, poet and polemicist Tom Fleming has retired.

During his tenure at this small but influential magazine of the paleoconservative right, which was founded by Polish emigre Leopold Tyrmand but turned into a real magazine by Tom, he published political and social commentators that varied from the Agrarian-minded Mel Bradford to the analyst of power that was Sam Francis, to the more humorous libertarian Bill Kauffman.  He also published  many men of letters: Wendell Berry, John Lukacs, George Garrett, Jorge Luis Borges, Andrew Lytle, Walker Percy, and Russell Kirk, to name a few.

Tom’s legacy will be, first, a publication that was willing to put its editorial hand on “third rail” political topics (such as massive immigration) when other magazines simply ducked. Anyone really interested in free political speech, be you on the right or left, should appreciate his courage. Secondly, he created a political magazine that was interested in the wider culture and in art, in way many political journals and sites are not, or not seriously. To give one example: the poetry published under Tom’s tenure (edited in recent years by poetry editor Catharine Savage Brosman) has been uniformly good—making the magazine the only one in America guilty of that.

Tom’s Chronicles never made the mistake of thinking politics was the sum of life, or even its center. It has been “a magazine of American culture,” and one that has been willing to celebrate what we can in this late Roman age of ours.

Though he will continue to write for the magazine, Tom has his own site at www.fleming.foundation, where he has already begun blogging. I’m told another book of social criticism is in the works, and I hope he will find a publisher for his own excellent poems. Good luck and Godspeed to him.