I recently had a chance to watch the film The Giver. Sometimes we get films early, sometimes late, sometimes at the same time as they are released in the United States. The Giver was one of the ones that had been out for some time stateside, but in a way, this movie and genre have been playing for years now.

Starting with The Hunger Games, continuing with Divergent, and now in The Giver, theater-goers have been treated to a winning formula in the “young adult fiction” genre: dystopian world controlled by shadowy authorities, featuring some idealistic and attractive young protagonists, mixed together with coming of age tropes shot through with love and romance. In the end our young people triumph and a film franchise is (or isn’t) successfully established. In a nod to the Harry Potter model that in part started started these types of movies, the studios take built-in avid readership committed to a series (usually a trilogy) of books and then bring these readers to the theaters (N.B: If possible, split third book of the trilogy into two parts, engendering even more income). 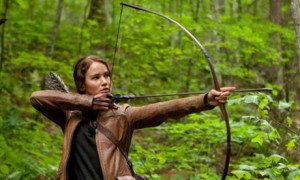 Winning business model aside, there seems to be something terribly attractive in these films to our post-modern society. Despite having rid ourselves of God and His Church, despite having dispensed with the obvious reason of the natural law, despite treating animals as if they were cogs in a factory, despite using those factories to make utter garbage, and despite having accepted all of this as part of life in the second millennium since the Son of God redeemed mankind, we still know, deep down in our bones, that something is horribly wrong. We know that the way we are currently living – both with each other and with the precious Creation God has gifted us with – will lead to utter catastrophe. It is so terrible that none of these films really address it beyond implying that something “really awful” happened in the past and start us in medias res.

While The Hunger Games treats us to gladiatorial games to the death – with children no less (an irony perhaps missed by an abortion-happy West) – both Divergent and The Giver neatly weave threads prevalent in the zeitgeist: NSA-style total surveillance, the power of “good government,” and the angst of what the young are to do with their lives. They pose their own secular answers to a problem they distill as “human choice” but that problem can only be properly examined when you accept a sine qua non long dismissed as Medieval quackery: Original Sin.

What am I supposed to do with my life?

Conveniently both Divergent and The Giver take this choice out of the hands of our young people. In the former you take a test, in The Giver the elders decide for you (based on, among other things, creepy 24/7 surveillance from test-tube conception until the age of majority). As is the case with all dystopias, we are really using the future to talk about the present. Today’s youth have seen the attacks of 2001 and the financial collapse of 2008; they hear more and more about student loans (indeed, in America the aggregate student loan bill tops $1 trillion, with a T) and the waning effectiveness of a degree in guaranteeing you a future and a job. Past the halcyon days of the 1950s where one obtained a job, got married to someone of the opposite sex, settled down, and had a family (how incredibly dull!), we now only see the bleak future of the job world and are confronted with the growing momentum of the spirit of entrepreneurship. Hence, in a world in which high school or college students code a smartphone app and become billionaires months later, it’s no wonder that the youth agonize about “what I want to do with my life.” These films take us one step further in that the way one’s life calling is presented also coincides with a public event and the power of a coming of age ceremony – experienced by the Jew in a bar mitzvah or the Catholic in Confirmation – and this makes the event even more dazzling (unless you’re in The Hunger Games, where if you get picked, you get to fight to the death on a reality TV show. Congratulations!).

Both of the featured ways of choosing your future have their logic: a test that grades your aptitude and the observance of those around you (who ostensibly love you and wish you to succeed). But they omit the vivifying catalyst: human choice. It is that choice that gives impetus but also allows us to change or leave that choice behind. Our careers (outside of the religious life) are what we do, not who we are. 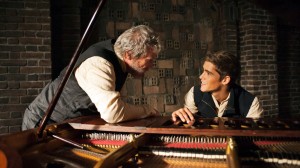 Indeed, it is that problem of choice, placed in the hands of flawed humanity, that informs how these respective societies construct themselves. Humans cannot be trusted to do the right thing and hence if choice is removed or controlled and “good government” is given free reign, all will be well. Divergent, a world of five factions, does this by allowing the semi-monastic “Abnegation” faction, the selfless, to rule (although we soon find out that our brains, the “Erudites” have had just about enough of that, thank you very much, and have enlisted the military faction, “Dauntless,” in a coup. Remember – this is about the future, not the present, right?). The Giver has taken our emotions by medicating us daily (we saw this in Equilibrium many years ago, before Christian Bale was Bruce Wayne, or Moses, for that matter, but when Sean Bean was still getting regularly killed in movies).

As I left the theater I realized that it might indeed be the subtlest strand in these stories, the reality of 24/7 surveillance by our loving masters, that is responsible for the dull dread in the back of our brain that leads us to tell these stories. “So what if they read my email?” is the insouciant penseé of the thoughtless class, too obsessed with sports or other First World preoccupations to think long and hard about the choices that have made our lives. “What’s the worst that could happen?” These films are our clumsy answers.

Entertaining in their own way, the films do get one thing right: tribes matter. Humans in any age want to belong to a group of people – with the family as the atomic level of that construct – that love them and wish them to be fruitful and multiply. But even this nugget will be lost to a society that claims “inclusivity” is our future. In embracing everything we have come to stand for nothing.

Why these films fail, or are at best, incomplete solutions, is because they fail to accept the truth of St. Augustine: “Our hearts were made for Thee, O Lord, and they are restless until they rest in Thee.” We are flawed and we often make terrible mistakes. But it is His grace that aids us to do better, not a secular government, and love of Him and a desire to be with Him that gives our life purpose, not progressive social controls that tell us that our three cardinal virtues are health care, education, and employment. If we accept that our future is what we do right now, perhaps we would live with more urgency.

The Jeff Bridges character, towards the end of The Giver, croaks, “There is so much more that is possible.” Indeed. If we first know where we are truly, metaphysically going, how dazzling those possibilities become.

Stephen Heiner makes his home in the bustling 2nd arrondissement of Paris, France. When he’s not showing tourists around or writing, he travels around Europe admiring the ruins of Christendom and breathing in the incense of centuries. You can read some of his writing at www.theamericaninparis.com.

Life in the Kolache Belt: Reflections from the Intersection of Food,...