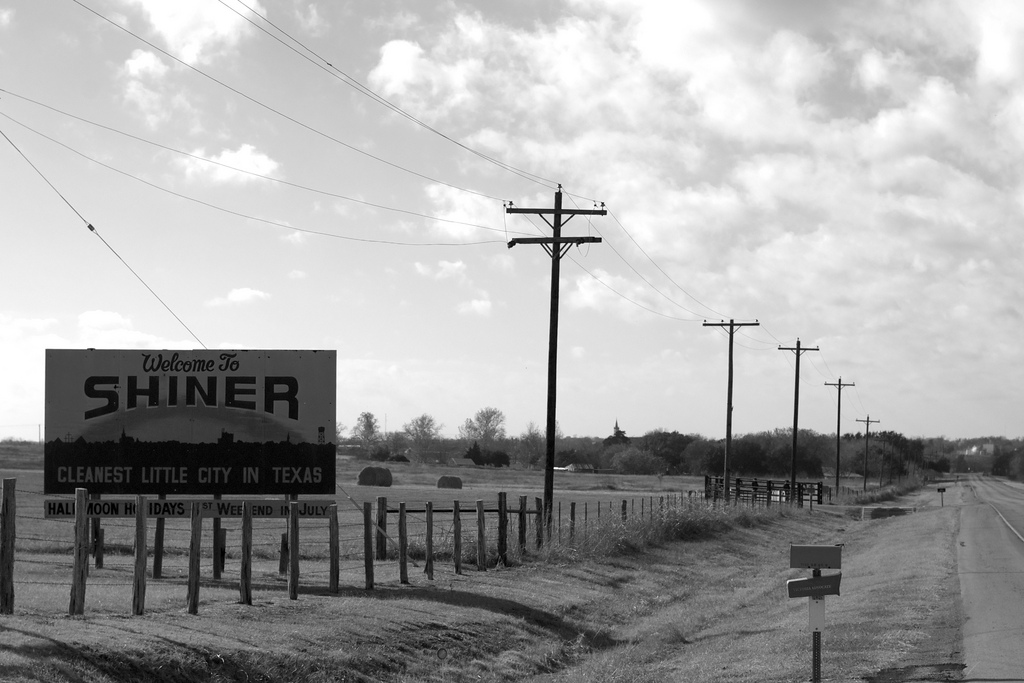 In this edition of Tales from the Kolache Belt, we celebrate community theatre. Not many rural towns of just over 2,000 souls can boast an institution like the Gaslight Theatre, but it is a testament to the people of Shiner, Texas that the volunteer raised curtain has gone up since 1975. Built in 1895, the Shiner Opera House succumbed to the forces of radio and cinema in 1927 and served as a warehouse for almost half a century, until — like a plot out of old Hollywood — a nun with a vision (and a drama class that needed a place to perform) arrived on the scene. Sister Michelle Belto, who taught at the local Catholic high school was the inspiration and initial energy behind the reinvigoration of this forgotten landmark. Today, the local talent and treasure rally each year to produce two dinner theatre productions in the impressively restored venue.

Art and life intersected on a November Friday night as the 10 day run of Greater Tuna debuted to a sold out crowd of 138 who ladled beef tips and gravy onto their Styrofoam plates and set them on paper placemats that doubled as playbills. Featuring the first in what have become an exceedingly popular series of four comedies about life in the “third smallest town in Texas,” the evening was about as close as one could come to watching a Tuna play in Tuna. To their credit, with spot-on trailer park props setting the mood, the local Shiner cast and crew was far better prepared than the fictional Tuna Players, whose “off again, on again” production of My Fair Lady was back “on again” after incorporating the sets from the previous year’s South Pacific.

Joe Sears and Jaston Williams met playing Shakespeare in San Antonio and bonded over the small town eccentricities they had escaped. That turned into a party skit, which with the directorial and financial support of Ed Howard — the off-stage member of this dynamic trio — turned into a small Austin production. Next came a nationwide 1982 run in New York and an HBO special produced by Norman Lear. With the Broadway sequel, A Tuna Christmas, the portly Sears would garner a Tony nomination for his quick change portrayals of ten male and female Tuna locals. Relative beanpole Williams does his share of fast cross-dressing as well, including into Vera Carp — the Vice President of the local Smut Snatchers society — who was the original “church lady” before the Dana Carvey version hit the tube on Saturday nights.

These small town refugees have their axes to grind with religion, as the not-so-subtly named Reverend Spikes suggests, but much of the Greater Tuna plot centers on the search for a purpose greater than oneself, whether the source be divine, canine, or extraterrestrial. God, dogs, and UFOs all play prominent roles in this dark farce with depth buried beneath the laughs. A bit like Garrison Keillor singing a gospel song on A Prairie Home Companion, when the one man animal rescue league Petey Fisk bares his inner demons and makes his plaintive final call for help here below, one senses the playwrights’ sincere hope that a God above might answer, even if their enlightened minds tell them glumly that it just can’t be so.

Austin, home to the Greater Tuna Corporation, is a liberal hippie hole in the Bible Belt and a mini-mecca for artistic agnostic types. Sears, Williams, and Howard satirize small town life in a way that delights superior urbanites but with sympathetic enough characters and undeniably clever writing, those who live on farm-to-market roads can still laugh at the joke, not just feel like its target. For over three decades now, the four Tuna plays have regularly toured the vast country-like realm from Texarkana to El Paso, with regular international stops in places like San Francisco and Washington, D.C. as well.

There were plenty of laughs at the Gaslight — and perhaps a few gulps, as the all white crowd took in a script heavy on highlighting the evil of racism. (Tuna is the home of radio station OKKK, and Roots has been removed from the library because it only presents one side of the slavery issue.) A local cast of seven amateurs, themselves each playing two or three characters, ably did the work of the original two men. The dinner hour included an impressive nonstop piano cavalcade that called to mind the building’s heyday when a saloon below the theatre was abuzz with life, though it should be noted that, despite Shiner being best known for its eponymous beer, bottled about a mile from the stage, the only drink served that night was iced tea.

Greater Tuna focuses on the foibles and failures of rural life: the hypocritically religious and racist, juvenile delinquents in full rebellion, chubby girls who will never make cheerleader, loose cannon gun nuts, and the town drunk (who in this case happens to see an alien spacecraft that looks like a chalupa). The Gaslight Theatre reminds us of another side of life in a small town, where there is a sometimes underestimated pool of talent and the potential to give deeply and selflessly to a worthy cause.

On the back of the placemat, across from a call for more volunteers and the acknowledgments for the “Angels” and “Saints” who wrote checks to keep the lights on, was a poem. Penned by one J. Jack Cloutier and titled simply “Sister Michelle,” it closes:

We all realize just how fortunate we are
To again have theatre in our little town
Thank God for this great thing that you did
And may He reward you with a star studded crown.

It is unlikely to win any awards for its meter or rhyme, but it is a work of love commemorating another work of love. That, as Wendell Berry reminds us, is what it means to be an amateur, one who works out of love. Even the most cynical big city showbiz types may still have a place in their hearts to appreciate that.

John Murdock writes from a family farmhouse in his native Texas and exists online at johnmurdock.org. He first saw Greater Tuna with its original cast while living in Washington, D.C.

Orwell and Huxley, Together Again: ‘The Interview’ and our Culture of...