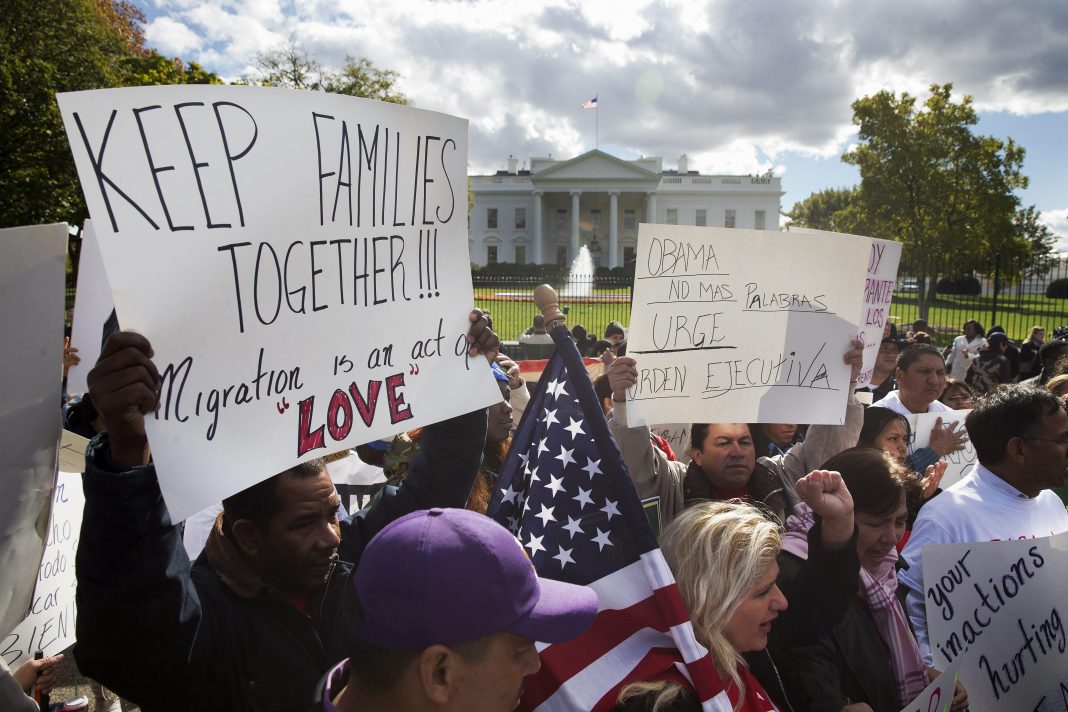 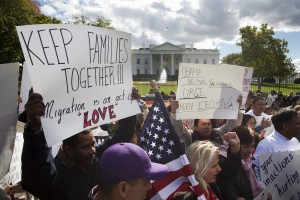 As Thanksgiving weekend passes, we are reminded once again that America is, in some sense, a land of immigrants. If the history of the species could be written, it would in no small part be a history of cross-fertilization, of peoples and civilizations coming together, sometimes peacefully and sometimes violently, and changing one another in the process.

America’s history of immigration is a complicated one. From the motives and actions of the early settlers, through the mass European and Asian immigrations of the last two centuries, to the immigration from the south, it has almost always been attended by nativist negativity. America is the most hospitable country in the world, in many ways, in terms of immigration, but this hospitality is accompanied often by grumbling about the guests.

Most readers and writers of this website have their own immigration story (in my case, my parents). Current immigration policy thus poses a dilemma: shared hospitality on the one hand versus the need for lawful and orderly immigration on the other. At the same time, openness ought to be tempered with a sense of maintaining something. Good guests do not enter a household with the intention of changing it. Whatever else is true of American democracy, it’s not a suicide pact

Two weeks ago President Obama exercised “prosecutorial discretion” regarding the deportation of persons in this country who are here without having followed the proper legal procedures. What to do with such persons has been a contentious issue in American politics for some time, made even more so when an unpopular lame-duck President attempts some resolution through constitutionally dubious means. Today’s panelists are Katherine Dalton, a freelance writer and editor in Louisville, KY; and R.J. Snell, a Professor of Philosophy at Eastern University.

The President gave a speech this week issuing an executive order regarding immigration policy. Has the President overstepped his bounds?

Kate Dalton: I believe he has. And I have been surprised to see a fair amount of agreement that he has, from speakers who can hardly be accused of being Republicans. The Washington Post is not a conservative paper, and is all for immigration reform (meaning amnesty), but its editorial board nevertheless took the President to task for his power-grabbing, writing recently that “Mr. Obama was right to argue Thursday that otherwise law-abiding undocumented immigrants deserve a route out of the shadows. But unilateral action is not the right way to achieve that.” Even Saturday Night Live lampooned Mr. Obama as the President who would push Congressional bill-making down the Capitol steps.

Mr. Obama’s assertion of Executive law-making—or in this case, law-rejecting–powers is in keeping with the greater assumption of power assumed by Presidents since FDR. But this particular end-run around Congress, after an election in which Mr. Obama’s party lost many seats, has made even a number of political liberals uncomfortable. There is the principle of the thing, and then there is the realization that there will not be a Democrat in the White House forever.

Mr. Obama is not the only one to blame. Recent Congresses bear a lot of responsibility for encouraging Executive arrogance–not just for ducking immigration enforcement, but for letting this or that President assume other powers, such as the de facto ability to start a war.

R.J. Snell: Our political discourse is so toxic that it is thought cynical to refer to the cynicism of another–almost like running a negative ad about your opponent’s mud-slinging–but is it really believable that three weeks after the mid-terms the President sees immigration as the most important issue? Is it cynical of me to suspect that the political team threw darts at the topics “most likely to cause the GOP to do poorly” and this one just happened to hit?

Should all Americans have an equal interest in immigration policy?

Kate Dalton: Some communities and some states are going to be much more affected by amnesty than others. But the numbers are so big that every American is affected, somehow. Thirteen percent of our population of 308 million is foreign born. And 37% of those 41 million immigrants have come to the U.S. just since 2000. Large as it is, the United States only contains 5 percent of the globe’s population, and yet we take in, currently, one-fifth of all the immigrants in the world.

Even in my own landlocked state of Kentucky, far from the Mexican border, the number of Mexican (and in Louisville, Bosnian, Somali and Hmong) immigrants has visibly increased in just the last 15 to 20 years. All these people bring many changes and some costs. For example, according to the immigration critic FAIR, the amount of money most states will spend educating their share of the 37,000 unaccompanied illegal alien minors currently in the system will run into the millions of dollars. Everybody is affected by budget stresses like that.

R. J. Snell: Of course the direct implications of immigration on education, health care, and crime don’t effect every one equally, so it’s easy to understand why some feel it much more directly. But insofar as immigration relates to (1) the rule of law, (2) our self-understanding as a people, and (3) care for family and equity, it’s hard to imagine we oughtn’t all be interested.

Localists are often accused of parochialism, and sometimes even xenophobia. How ought localists think about immigration?

Kate Dalton: Name-calling is what sophists do when they want to mute their opponents. “Parochialism” is a term that’s used to belittle a person into right-thinking, or at least silence, while “xenophobia” is a fighting term that’s meant to end a conversation by putting the accused person outside the pale of decent discussion. We have to be able to talk about immigration without resorting to rhetorical temper tantrums, or we will not be able to find a reasonable solution. Part of the problem may be, of course, that many of those in power aren’t really interested in a solution—it’s too hard, and too risky politically.

As for the rest of us, if xenophobia is defined as defending in any way a (multiethnic) people’s right to retain its own institutions and culture, not to mention its budgets, then we have to be willing to be “xenophobic.” It is hard to look on a poor teenager from Columbia or Mexico trying to escape poverty or a violent community and not feel compassion. But we are fooling ourselves if we think we can make room for all the people who might like to come to live here, without radically changing the political structure, folkways and livability of the place that we have had the unmerited good fortune to inherit as our home. I would never argue that we have no responsibilty for a refugee—even an economic refugee. But we have a greater responsibility to our own families and neighbors. To put those considerations last, in order to accommodate, first, an enormous wave of strangers coming here or staying here illegally, is ethically wrong. We can treat illegal immigrants fairly and compassionately, without ceding our country to them.

R.J. Snell: We care for (1) the rule of law, (2) family, and (3) community, among other things. We ought to strive to keep families together, and so any notions of mass deportations and so on should be quickly forgotten–we need to keep people together. At the same time, the rule of law can’t simply receive a cursory wink, so citizenship for law-breakers can’t be condoned. But keeping people together without granting citizenship seems like a good start.

Is immigration a threat to the sorts of cultural ideas to which FPR adheres?

Kate Dalton: Most people (including me) are not opposed to immigration per se. They are opposed to illegal immigration, and immigration on the tremendous scale that we are experiencing in the U.S. To import millions of people rapidly is to greatly change the culture and place where you live. If FPR writers and readers value their own places and culture for what they are and have been, we have to admit that large-scale immigration promises to erase some of that.

What, in your judgment, ought to be the bedrock principles of a sound immigration policy?

Kate Dalton: The most necessary change is to rescind the privilege of being able to claim American citizenship simply by being born on American soil. That notion makes no sense in our modern, mobile world. Does anyone think my child really ought to have all the rights of a Japanese citizen—or be “Japanese”– solely because I might happen to give birth to her in Okinawa? Yet since Mr. Obama’s executive order states that illegal immigrants who have citizen children are the ones who will now be protected from deportation, that order will—I have to think intentionally–only increase the birthrate among illegal immigrants.

How would you recommend “handling” persons in this country who have not come here through legal channels?

Kate Dalton: While I have read several suggestions, I have no expertise here. It is a long, long border, and there are a lot of people. But solutions will only be found when there is a will to find them, and for a long time now there hasn’t been a real will for limiting immigration in either party. Until our President, Senators and Congressmen desire to enforce our current immigration law, and keep to reasonable policies on numbers, nothing is going to change, except for the worse.  The most likely way I see the border being “closed” is by a full-bore depression.

R.J. Snell: Something like permanent residency which allows a way to reduce law-breaking and a way of life on the outskirts. For this to work, we need immigrants to become at home in our form of life, supporting our deep sense of stability and constancy, which cannot happen if they are perennially on the outside. But we can’t reward breaking of the law–so citizenship is likely out, but taxes and social security in.

Telling the Truth about Immigration

What Colour Is the Village Green?