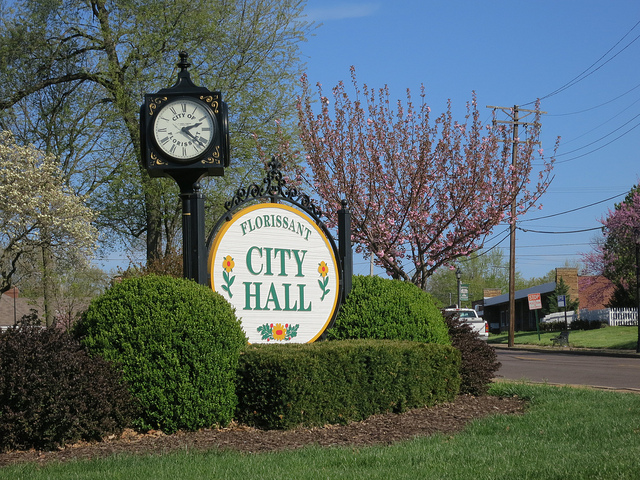 Recently the city council in my hometown decided we desperately needed a courthouse. Mind you, my hometown is not the state capital. It’s not even the county seat. Florissant is a mid-size working class suburb north of St. Louis with a somewhat steady population of 52,000, about a ten minute drive from Ferguson.

It turns out municipal courthouses are a bit of a rarity. Nearby St. Louis has one, but other than our nation’s largest cities I have never heard of a town building a municipal courthouse. Especially a struggling, working class commuterville like ours.

Florissant, however, derives a good deal of its revenue (13 percent in 2013) from its municipal court in the form of fines and court costs. Many of those fines are paid by people who cannot afford to hire attorneys to fix their tickets for them. Often they have to represent themselves in court too. Many lack transportation, daycare or the money to pay their fines and court costs, so they fail to show up, which results in a bench warrant and their subsequent arrest and more court appearances. A vicious cycle thus begins.

Like most of the dozens, if not hundreds, of Midwest towns I have covered as a reporter, Florissant has long held its “traffic court” in its city council chambers. But recently some bureaucrat in Jefferson City decided those chambers weren’t spacious enough for Florissant’s high number of lawbreakers. Rather than hold court more often — or cutting back on traffic tickets — the city fathers elected to take the unprecedented step of building a municipal courthouse, to be paid for, in part, by raising court costs and fines.

I found out about the planned courthouse in a rather circuitous way. Not down at the coffee shop where the old guys once read the weekly newspaper front to back over mugs of forty weight and muttered, “I see by the paper…”

Nor did I read about the planned courthouse in the St. Louis newspaper.

I was tipped off by a story that appeared in the online edition of a major East Coast daily newspaper. That paper’s reporter just happened to be in the area covering the Michael Brown shooting in nearby Ferguson. While investigating the root causes of the subsequent unrest he discovered that north St. Louis County’s countless miniscule municipalities — former subdivisions, incorporated years ago into towns to keep out blacks — derived much of their revenue from fines and court costs related to quality of life and petty traffic violations.

It was a good story. One that should have been right in the wheelhouse of our hometown newspaper.

Only we have no hometown paper. Not anymore.

As a former newspaper man I feel keenly this lack of traditional news outlets. I spent much of my working life in community journalism. That part of my life ended shortly after the newspaper industry went bust in the late 1990s, due in part to the birth of the Internet and to the bulk purchase of hometown newspapers by distant corporations whose management cut staff and slashed budgets and squeezed the papers till they had wrung every drop of profit from them, then closed shop and filed for bankruptcy.

And so began our paperless society.

Even before the bust, community journalism was a hard way to make a living. You worked long hours and most weekends for minimum wage or less. Journalism, in general, has always been the lowest-paying profession, rivalling that other grudgingly respected profession: teaching. Like teachers, journalism’s practitioners are thought to lack real, practical skills. After all, what does a journalist do? He writes. Big deal. Everyone can write. But not everyone can design a 747 or trade stocks and bonds. As for teachers? As the saying goes, those who can’t do, teach.

The low pay and long hours were offset somewhat by the sense of fulfillment we received in providing a vital community service: training a gimlet eye on the local government and police, keeping citizens informed about candidates and issues in upcoming local elections, etc. Not to mention printing the equally important human interest stories that gave local heroes their due.

Most folks, of course, didn’t see it that way. So when newspapers began dying off few of us blinked. Sure we missed scanning the obituary page and the crime blotter, and the coverage of local high school sports, but, really, the disappearance generated no more than a shrug. Besides there was still the big St. Louis daily. Or what was left of it.

It was believed that new technology would fill the void, as if teams of robots would go forth into the world and gather, write and produce the news. Or maybe that would be the role of the pajama people in their basement lairs. The problem is the kind of so-called citizen journalists who blog and tweet don’t necessarily attend 7 p.m. meetings of the zoning board of appeals, the park board, the school board, or special taxing districts. They seldom sit through circuit court hearings or sit down with political candidates. And how often do
they pour over the latest batch of probable cause statements? They may have slightly informed opinions in regard to a few issues, but they are not trained journalists, taught to investigate leads, ask tough questions, and present it to the reader in a plain and concise style illustrated with powerful images.

Some naively believed local television news would provide ample news coverage. Local TV newsrooms ostensibly cover hundreds of towns in their broadcast area and rarely dedicate even more than a few seconds — if that — to local government or school news. Unless your school district is going on strike or your band teacher has molested a trumpet player, your town is not going to make the TV news.

I suspect the recent events in nearby Ferguson were in part a result of the dearth of investigative journalists keeping an eye on the dubious machinations of local governments. Lacking hometown newspapers there was virtually no reporting going on in the Ferguson area. No watchdog was attending city council or school board meetings. Nobody was pouring over the town’s budgets or speaking to aggrieved residents. Nobody was writing about the daily harassment and disrespect African Americans were enduring daily in North St. Louis County. With the exception of the toothless social media, there was simply no forum for aggrieved residents to grieve in.

It was unsurprising then that no one I talked to in Florissant knew that the city was about to build a multi-million dollar municipal courthouse. (Even today, neither I nor anyone else knows how much the courthouse will cost since there is no still coverage of the courthouse story.) And to pay for its boondoggle, the city is going to either have to raise taxes or step up the number of traffic and nuisance violations it issues.

It’s frustrating for an old newspaper reporter to see my hometown government operating unhampered by the watchful eye of the press, even the second-tier community press. At least once a week some bit of news crops up that makes me long to put on my reporter hat and start typing up a front page story about this or that shenanigans the city fathers are up to, or, at the very least, compose a fervent letter to the editor. I suppose I could post such a letter to some social media site, but most of my so-called Facebook “friends” don’t live in my hometown and hence could care less, and besides my comments would only get lost amongst the Web’s detritus of cat videos and food photos.

I know for a fact that newspapers can make a difference to a community. I myself have written stories that helped turn empty food pantry shelves into full ones. My reportage has kept an historic Victorian home from being razed and replaced by a liquor store owned by some out-of-town millionaire. Nearly every reporter has similar stories. But mostly I like to think community journalists have kept people informed about what is going on in their cities and towns, which is vital for making residents feel a part of their community. Today in my hometown, I don’t have the slightest idea what’s going on. And, with the exception of the mayor and city council members, neither does anybody else.

And that can’t be good in a democracy.

Maybe that’s why I am optimistic that hometown newspapers will return. Not the free, waterlogged throwaways that lack substantive news you find lying like roadkill in your driveway, but real, subscription-based newspapers produced by full-time professional journalists and owned by local families with a genuine interest in their communities. I believe that just as many big city dailies and small town weeklies survived with the advent of radio and television, the hometown paper will rise again, Nosferatu-like, and resume its traditional role as the first stop on the information superhighway. And the best way to read those newspapers is, and will always be, in print format where readers can see every story in its editorial hierarchy and entirety, every photograph, every obituary, and not some digital representation that takes what seems like forever to load and where you find yourself, five minutes in, inexplicably and dazedly, watching cat videos on YouTube or checking Pinterest.

I like to think we Americans care about what’s going on in our communities, that we are beginning to realize apps and social media and robots are poor substitutes for local reporters, photographers and editors.

I hear it said quite often that certain things should be allowed to fall gracefully into obsolescence: buggy whips, for example. But when the situation calls for a buggy whip nothing else will quite do.

Christopher Orlet is an essayist and former reporter living in Florissant, Mo.

From the Village Square to the Global Village—and Back?