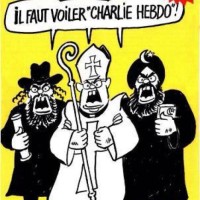 Would I read Charlie Hebdo? (Assuming I could read French, that is.) Would I want anyone in my family to read it? Would I want it to be available at my daughters’ elementary school library, or at the high school library, or on sale at my neighborhood QuikTrip store? Those questions aren’t all the same, obviously–but neither are they, I think, completely unrelated to each other either.

As for me personally, well, I am a regular reader of The Onion. And Monty Python and David Letterman have been pretty central to the formation of my often sarcastic, mocking, absurdist, even cynical take on the world. On the other hand, I’ve never really taken to South Park, and I’ve never been more than ambivalent about the really vicious–however darkly brilliant–traditions of comedy satire out there. (Bill Hicks, take a posthumous bow.) And Charlie Hebdo’s over-the-top anti-clericalism (just see here) certainly seems to fit in that category. (The cartoon above has French Jews, Catholics, and Muslim all shouting “Charlie Hebdo must be veiled!,” an obvious reference to the ongoing controversy over laws banning Islamic scarves and facial veils in public in France.) I suppose I content myself with watching the Life of Brian in part by reminding myself, on some level (as the Pythons themselves always insisted!), that the film was heretical, not blasphemous. That’s not an easy line to draw, obviously, but I think it’s worth drawing. To be heretical is to challenge or mock an orthodoxy, an established understanding, an institutionalized structure of one’s faith and way of life; to be blasphemous is to mock or attack the point or object of that faith or understanding or way of life itself. And assuming you take both 1) religion and 2) the obviously social lived reality of cultural and community formation seriously, the latter is a much greater problem than the former. So figuring out how to distinguish between them–and also, though certainly not in the same way or to the same degree, given the different contexts involved, for my family and my neighborhood–is worth doing, however uncomfortable doing so in a liberal society may be.

Of course, when you’re faced with horrors like Wednesday’s massacre in Paris, that discomfort also feels pretty cheap. When three men take it upon themselves to murder a dozen others because the words spoken by those others, and the cartoons they drew, seemed blasphemous to them and/or their community (or, as some have smartly suggested, when terrorists see a way to ramp up amongst the French public the sort of provocative and defensive discussions of “blasphemy” which might well rebound to their benefit), the notion of clarifying one’s anti-liberalism and explaining why and how you think some speech is virtuous and some simply isn’t may well be probably pointless. Stand with the cartoonists, stand with the blasphemers! In one of his best columns in a long time, Ross Douthat makes this point very well:

[W]e are not in a vacuum. We are in a situation where…the kind of blasphemy that Charlie Hebdo engaged in had deadly consequences, as everyone knew it could…and that kind of blasphemy is precisely the kind that needs to be defended, because it’s the kind that clearly serves a free society’s greater good. If a large enough group of someones is willing to kill you for saying something, then it’s something that almost certainly needs to be said, because otherwise the violent have veto power over liberal civilization, and when that scenario obtains it isn’t really a liberal civilization any more. Again, liberalism doesn’t depend on everyone offending everyone else all the time, and it’s okay to prefer a society where offense for its own sake is limited rather than pervasive. But when offenses are policed by murder, that’s when we need more of them, not less, because the murderers cannot be allowed for a single moment to think that their strategy can succeed.

There’s nothing I can think to add or take away from that statement. I dislike liberal individualism, and am deeply suspicious of our (I think somewhat ridiculous) idolization of free speech. When the important liberal principle of respecting the profound plurality which modern subjectivity and technology and liberty has enabled to develop across the globe becomes (or is twisted into) a determination to stifle or discredit any attempt by any group of people–a family, a church, a neighborhood, a polity–to establish norms which sometimes (not always, but sometimes, as the democratic debate may make appropriate) may be reflected in law, then the very possibility of treating civility and community as the robust concepts they in truth are and deserve to be simply goes out the window. But none to that is relevant to what happened in Paris. Terroristic acts of violence are not in any possible way comparable to the introduction of democratically determined rules of civil society. Offensive speech, even blasphemy, becomes–as Christopher Hitchens, complete ass though he was, correctly argued long ago–a positive good in a situation when someone chooses to use violence to shortcut the process by which religiously pluralistic societies get democratically nudged in one direction of another through discourse and the collective decisions of thousands of individuals within their local groups. That gives anti-liberals a veto power that we shouldn’t want anyone to have, or else freedom is done for.

One response to that, though, is to remember the argument from just a little more than a decade ago, at the time of the violence which followed the publication of blasphemous, anti-Muslim cartoons in a Danish newspaper (cartoons which Charlie Hebdo happily reprinted!). The claim made then, in essence, was that Muslims in Western Europe were living in a condition of having already had their faith and way of life “vetoed,” and thus care must be taken in dismissively telling Muslim fundamentalists to eschew violence and trust in “the process.” On a certain level this was, obviously, nonsense (there were numerous robust and well-established Islamic institutions throughout Europe a decade ago, and are even more today), but it wasn’t utterly groundless nonsense. Anti-Islamic sentiment and outright paranoia are realities throughout the continent. The nations of Western Europe–none more so than France!–have a complicated collective relationship with their sectarian Christian pasts, and the result is a huge amount of inconsistency and frustration in how they are to accept the reality of their internal cultural transformation. (The historian David A. Bell talks at length in an old essay here about the failure of France to extend its Enlightenment ideal of republican assimilation, after so many–relative–successes throughout the 19th and early 20th centuries–to the largely Muslim immigrants who came to live within its borders in the years following WWII and continuing until today; some comments of mine about the essay are here.) So perhaps our thinking about whether we should embrace, or at least be willing to defend in the face of violence, an offensive and blasphemous publication like Charlie Hebdo should be done with a consciousness of how very Western, Christian, and liberal the mental processes by which we distinguish between merely “heretical” offensive speech, and that speech of a worse–for a faithful Muslim, anyway–kind.

The fact that we spent more than a decade (and, to a degree, still are) trapped with the “war on terror” discourse makes the ability of us to think carefully about these levels and contexts of appropriate speech doubly difficult; because the rubber so often meets the road in the case of depictions of the Prophet Muhammad or other particulars of the Muslim faith in secular, Western venues, almost every attempt to get clear on these important issues gets tangled up in the same old “clash of civilization” arguments which dominated our thinking for far too long. I contributed my part, to be sure. In long debates between those who insisted that the respect of individual liberty necessitated a rigorously neutral–and thus non-line-drawing–public square, others tried to enlist the kind of limited, carefully anti-liberal distinctions I’m talking about here into a larger meta-liberal project. Defenders of the idea of America taking on the responsibility of a liberal imperialist project in the Middle East–bringing democracy to Iraq!–would suggest that America speaking out against tendency of (Western European) secular society to engage in (often anti-Muslim) blasphemy would be a way of lessening fundamentalist suspicion of American modernity, and help us find allies.

This argument was, as they say, too clever by half; my friend Damon Linker referred to it as a “sentimental civic-religious-providential amalgam of America, Christianity, and Democracy,” and while I tried to rescue the idea at the time, I can now see that Damon was right. Not to impose too many binaries upon these complicated debates, but you really probably can’t fully align these two different perceptions of the relationship between individual expression and freedom, and certainly not under the aegis of some oppressive civilizational narrative. If, in the end, you’re persuaded by those arguments or those experiences which lead you to hold your neighborhood, with all its cultural norms and social structures, as that which really matters most, then getting into the thick of figuring out just when and where and to what degree you’re going to be content with contemptuous and blasphemous–even if funny!–speech like Charlie Hebdo‘s in the liberal society you live in is just going to have to be your anti-liberal responsibility. And if you’re not so persuaded–if you really don’t, contrary to what I wrote at the beginning of this post, make “religion and the obviously social lived reality of cultural and community formation” your priority, for whatever reason–then you’re justified in looking at the rest of us suspiciously. Since, of course, depending on whatever democratic changes and cultural contexts may come, it might be your blasphemy which we start trying to dissect next.

I don’t imagine there’s any likelihood that this particular debate about liberty and community will ever be fully resolved so long as the modern epoch continues. In the meantime, for those liberals who are–reasonably, if not, I think, fully justly–worried that those of us who are appalled by these attacks and yet still want to say something like “I’m not defending the terrorists, but Charlie Hebdo was often indefensibly gross” will turn out to be fair-weather friends, I’ll just point to those many people who have, and continue to, make these distinctions carefully and well. And for those whose anti-liberalism carries them all the way over to violent religious fundamentalism, whether Muslim or otherwise, all I can say: don’t confuse a willingness to attend to the particulars of one’s community with the liberalism of fools.

No, I’m Not Charlie Martel, Either

If the U.S. Were a Christian Nation, Would that Make Christianity...