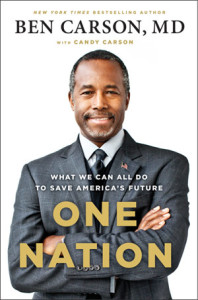 “Ben Carson: Political Phenomenon.”  That gushing headline, at CNN.com of all virtual places, was followed by a puff piece of epic proportions.  Of course, with a Horatio Alger worthy biography (Carson’s got the award to prove it), it is easy for the truth to come across as puffy.  Rising from an impoverished broken home to become the head of pediatric neurosurgery at a renowned institution like Johns Hopkins is the stuff of melodramatic TV movies.  Ben’s been there, done that as well—the conjoined-twin-separating Dr. Carson was played by Cuba Gooding, Jr.  Not bad.

The reason for this latest “phenomenon” tag was a 10% showing in a far too early CNN poll of potential 2016 candidates.  Of course, in today’s compressed news cycle, the media will attempt to both build you up and tear you down simultaneously.  One click over, an inquisitive Wolf Blitzer is pelting Carson about once comparing America to “Nazi Germany.”  Blitzer didn’t seem too interested in sharing the context of the analogy, a fact that Carson was not above politely but firmly pointing out, though it’s generally a good idea to avoid flippantly playing the “Nazi” card.  Same with the “slavery” card (even for one who has endured overt racism) but Carson has already dealt that one too, calling Obamacare the worst thing to happen in America since the “peculiar institution.”

The loose lips that concern me most, however, were probably one reason for CNN’s initially glowing treatment.  Carson downplayed social issues, calling them “little barnacles on the side of the ship.” Search “Ben Carson” and “barnacles” and you will see that it is one of his favorite illustrations, though usually it is utilized within an argument for political pragmatism.  Don’t squint at (usually unspecified) barnacles when the ship of state is about to go over the falls, just vote for the invariably imperfect candidate (whether RINO or wing-nut) who will best help turn the thing around before it’s too late.

Here, though, he wasn’t taken out of context and Carson gave the Washington Times a similarly demeaning assessment after a 2014 CPAC speech where, ironically, he was one of the very few contenders to affirm traditional marriage from the stage.  So, if social issues are mere barnacles, what is Carson’s metaphorical ship?  Apparently, it’s the economy, stupid.

He tells CNN that barnacle scrubbing can wait “until we get things moving in the right direction, get the economy moving … bring people out of poverty … deal with our energy resources in an appropriate way, get education back where it belongs … those are the issues that are critical.”  (In these days of distinguished journalism, it’s a bit unclear if the ellipses are CNN’s omissions or, like, you know, texting style pauses.  I’m betting on the latter.)

The same day I was reading that Ben Carson viewed “the economy” as the key to keeping America from going over the edge, I also happened to be flipping through Steps Toward Restoration, an essay collection looking at the legacy of Richard Weaver.  Mark Malvasi, a historian of the Southern Agrarianism probably now best represented by Wendell Berry (who happened to be steps away when I purchased the book a few months back in Louisville), suggests that Weaver would likely see such “social” matters as more than mere barnacles that can just be dealt with when safely back in the harbor of economic good times.

“He foresaw a time,” Malvasi writes, “when upholding tradition, morality, and civility would become more important to the survival of civilized life than the perpetuation and expansion of wealth and power.”   Malvasi, writing in 1998 on the 50th anniversary of Weaver’s classic Ideas Have Consequences, concludes, “That era has now arrived.”

Weaver proposed small scale private property ownership—where human work, the things of the earth, and moral values intermingle and strengthen each other— as an important bulwark from which to defend civilization, but he contrasted this against the destructive “enthronement of economic man.”  While Carson sees our country’s primary danger being the Good Ship Economy floating downstream on the Niagara River with the wrong captain at the helm, Weaver offers his own watery metaphor and calls us to something higher:

If material goods had been seen as something with a fixed place in the order of creation rather than as the ocean of being, on which man bobs about like a cork, the laws of economics would never have been postulated as the ordinances of all human life.  But this again requires belief in nonmaterial existence.

Economics should have its place, put not the primary place.  A cohesive society is based on a common “metaphysical dream” or grand vision of reality that shapes general beliefs and specific ideas.  Weaver writes,

A waning of the dream results in confusion of counsel, such as we behold on all sides in our time.  Whether we describe this as decay of religion or loss of interest in metaphysics, the result is the same; for both are centers with power to integrate, and, if they give way, there begins a dispersion which never ends until the culture lies in fragments.

In short, lose focus on a transcendent North Star and the whole boat of civilization gets caught up in a materialist current and goes over the falls.

Professor Malvasi describes Weaver as fearing that when the bonds of family, community, and tradition have been severed, there would develop a “passion for wealth, comfort, and leisure at the expense of the common good.”  Such certainly seems an apt diagnosis for our times.

Dr. Carson, author of multiple Christian label books and one whose political rocket-ride was launched at the 2013 National Prayer Breakfast where he lamented “moral decay” inches from the President, seems an unlikely proponent of Mitch Daniels’ style back-seating of social issues.  Of course, Richard Weaver, the childless bachelor academic and infrequent Anglican worshiper who lived most of his life in a rented room in Chicago can seem a bit of an odd defender for sacredness and intergenerational community.  Nevertheless, ideas matter and words have consequences.

Ben Carson seems poised to follow the path blazed by the likes of Ross Perot and Herman Cain, charismatic men of great accomplishment in one area of life who decided they deserved to slide directly into the White House without any political warm-up act.  Such figures take an I just gotta be me approach that produces a bubble of enthusiasm before they are hobbled by the self-inflicted bruises that come when shooting fast and hard from the hip.

Instead of losing himself in the cheers, Carson might be better served to engage his pragmatic side once again.  Maryland, which surprisingly elected a Republican governor a month ago, has a senate election in 2016.  That seat will either be defended by Barbara Mikulski, an octogenarian who hasn’t faced a real race in decades, or open upon her retirement.  With the ability to raise money nationally and medical credentials that make his gravitas difficult to dismiss, Carson could potentially forge an interesting coalition and be a net positive on Capitol Hill.  Sitting next door to D.C., the race certainly would draw plenty of press, and even a loss in the heavily Democratic state would not extinguish his national voice.

A campaign closer to home would also give Carson more time to re-examine and hone his personal philosophy and political priorities.  And I’ve got just the thing for his reading list.

John Murdock worked in our nation’s capital for over a decade as an attorney and now writes from a farmhouse in his native Texas.  He exists online at johnmurdock.org.