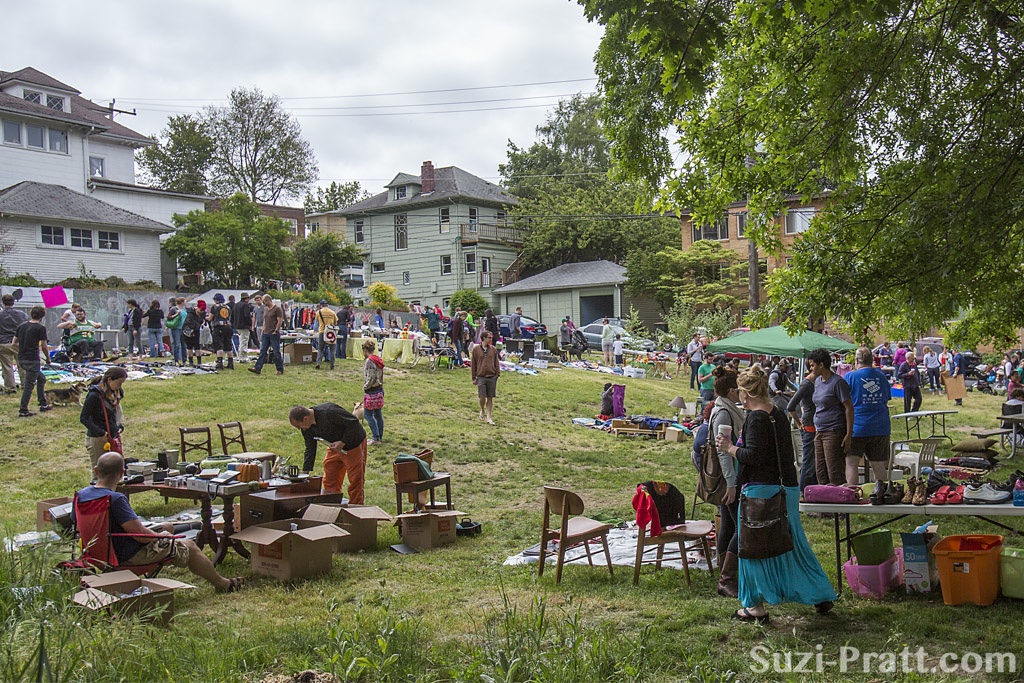 What used to be called garage sales and are now also called “yard” and “estate” sale are the scourge of the neighborhood and a major contributor to the putrefaction of America.

I was reminded of this ugly part of the American experience when last Saturday morning I was walking our three dachshunds, beginning to settle into a poet’s walk of enjoying birdsong and watching the nice green lawns of neighbors being sprinkled by water in criss-cross patterns, thinking about how the occasionally forgotten newspaper in the driveway would be consumed with no drying out to possible legibility being likely, when my stream of consciousness was interrupted by a phalanx of automobiles heading the dachshunds’ and my way at a speed no decent neighbor would travel.

It did not take long for me to spy the reason for reckless driving. Down the street, where the neighbors who liked to sleep in after a week of hard work likely had been awakened by one of the most awful American traditions, the yard sale, a most un-neighborly person must have decided to do spring cleaning and put the waste on display outside. Making my way through the residential street that had been turned into a tunnel by parked vehicles on both sides, witnessed people greedily going through belongings that appeared to be hardly donation-worthy or of value enough to take the standard tax deduction.

I have seen them all, with the same kind of horror and fascination Prufrock must have felt for other parts of life, having run by garage sales over the years on my weekend marathon training sessions. Used underwear, likely custom-streaked, cracked seats of swings, books with torn covers and less appealing content, the invalid dresser, at times its innards of particle board pre-soaked by rain or leaky pipes — how shameless those who hold garage sales and attract scavengers on two legs, keeping them in a vicious cycle of addiction to garbage they can ill afford nor need.

What a horrible example parents who hold yards sales are to their children.  Simply put, children learn that they can sell what is often damaged goods to others.  The extension of “damaged goods” should be obvious here when future generations will have to put up with yard sales as if in a horror movie of the walking dead.

It would be one thing if the “rich” decided to get rid of their garbage and make some change to spend on a few cups of Starbucks, or a better thing if the “rich” were to sell truly functional items at great discount and service to the poor, such as a lightly used Keurig, a gift subscription to the Wall Street Journal, or a good bottle of red wine they had bought too many of and grown tired of, even the chocolate truffles with real truffles that did not live up to sensory expectation. Sadly, it is not necessarily the rich who are guilty of having yard sales, but it is often the lower- and middle-classes who perpetuate this grave crime on persons of their own or lower socio-economic status.

This group is also guilty of linguistic abuse, having taken the term “garage sale,” which I comfortably grew up with and saw little of, to name it a yard sale, which does mean spreading out of the junk, but usually not beyond the driveway. The true torturers of the English language are those who use the term, “estate sale.” Small homes and piles of junk are what I have seen advertised under this label, in print or on almost-litter cardboard signs, and unless this sale is the estate of someone who has died, we would expect something more fantastical, like dark furniture the Keno brothers would salivate over, or a painting of girl with big eyes among the items to be auctioned off, instead of lying there, carcass-like, waiting for greedy hands and bargaining tongues.

In the spirit of democracy, is it better to spend Saturday mornings out on the golf course or sitting in a deer stand, hand washing the Audi or Porsche? Or, if one prefers a “layered” democracy, would working in the kitchen garden or mending socks, even having an early beer and smokes, be any worse or better? That is for the people to decide, but any self-respecting American, whether he or she believes in exceptionalism or not, must decide to what part of American exceptionalism garage sales, yard sales, estate sales, must be relegated.