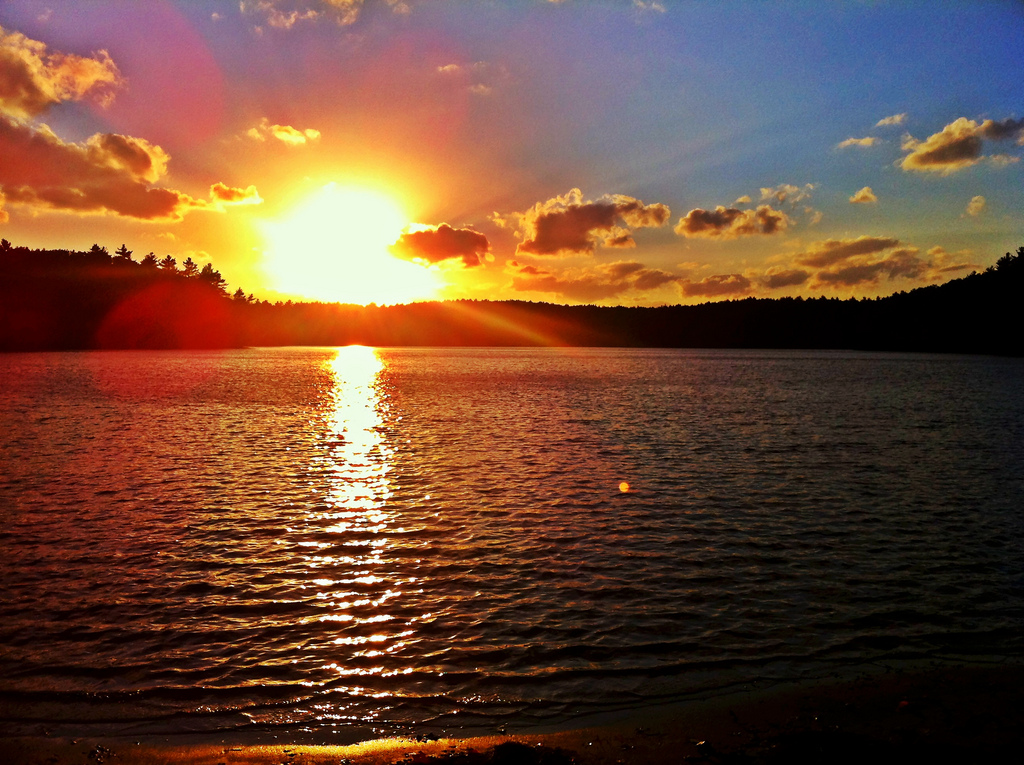 Windswept and partially covered in snow, winter debris still clinging to its banks, Walden Pond offered no glamorous window into the preeminent beauty of nature when I visited in early April. Its crystal waters were masked by ice and the trees were completely bereft of the seasonal colors that invigorate an otherwise nondescript shoreline.

Certainly, it would have been worthwhile to witness Walden in its peak season, with autumn colors offering a dramatic backdrop to the tranquil New England pond, but as I questioned my suspect timing, I recalled Thoreau’s own words to describe Walden Pond, whose beauty, he asserted, is wrought from intimacy rather than awe-inspiring landscapes.

“The scenery of Walden is on a humble scale, and, though very beautiful, does not approach to grandeur, nor can it much concern one who has not long frequented it or lived by its shore …” (Walden, “The Ponds”)

Of course, on just my first visit to Walden, I couldn’t claim the familiarity of which Thoreau wrote, but I do believe important lessons can be learned from a pilgrimage to Thoreau’s famous retreat, reminding us why nature has been viewed by many as an edifying force in an otherwise fast-paced, commercially driven world.

Retreat is necessary today in part because we spend so much of our time isolated and enclosed. Even in groups, we’re often fixed on literal and figurative mirrors, putting up cognitive barriers to the world around us. We miss beauty. When we’re not snapping the oft-chided selfie, we’re chasing other distractions; or pointing our mirror outward at those around us, seeing how our reflection compares to theirs.

As Thoreau reminds us, nature, and specifically its natural bodies of water, point to a larger world outside our own.

“A lake is the landscape’s most beautiful and expressive feature. It is earth’s eye; looking into which the beholder measures the depth of his own nature. The fluviatile trees next the shore are the slender eyelashes which fringe it, and the wooded hills and cliffs around are its overhanging brows.” (Walden, “The Ponds”)

Thoreau wrote about the beauty of Walden Pond like no one else could because he knew its waters better than anyone. The level of detail he uses to describe the pond’s features attest to this intimate familiarity.

“All our Concord waters have two colors at least, one when viewed at a distance, and another, more proper, close at hand … The water is so transparent that the bottom can easily be discerned at the depth of twenty-five or thirty feet.” (Walden, “The Ponds”)

This intimacy is further aided by the feminine imagery Thoreau employs to describe the pond’s most cherished features.

“Not a fish can leap or an insect fall on the pond but it is thus reported in circling dimples, in lines of beauty, as it were the constant welling up of its fountain, the gentle pulsing of its life, the heaving of its breast. The thrills of joy and thrills of pain are undistinguishable. How peaceful the phenomena of the lake!” (Walden, “The Ponds”)

If any of us have been fortunate to experience the sublime joy Thoreau describes at the sight of a mere ripple in open water, that exuberance and sense of wonder has likely been nullified by our age, pragmatism, and cold rationalization. Unfortunately for us, this jaded outlook doesn’t just inhibit our appreciation of nature, but distorts how we understand ourselves and our ability to effectively relate to others.

Thoreau became attached to the natural world, but he was no hermit, as many historians will attest. He entertained guests and took frequent trips into town during his two years spent living in his small, self-built cabin on Walden Pond, just a short distance from Concord. So it would seem, for Thoreau, retreat was not about isolation, or the cultivation of any reserved, antisocial behavior. Instead, Thoreau’s simple living and contemplation of the world’s natural beauty was more an effort of re-orientation; of fixing the compass needle of his life on something purer, more permanent, and worthy of his attention, than the social, political, and industrial upheaval of the time.

“Sometimes, having had a surfeit of human society and gossip, and worn out all my village friends, I rambled still farther westward than I habitually dwell, into yet more unfrequented parts of the town, ‘to fresh woods and pastures new …’” (Walden, “The Ponds”)

Thoreau rightly recognized that “the mass of men lead lives of quiet desperation,” and so, he sought to “live deliberately” and confront “only the essential facts of life.” Years after it provided a backdrop for Thoreau’s experiment of deliberate living, Walden Pond continues to inspire not just writers, nature-lovers, and transcendental philosophers, but its clear waters and tree-lined banks invite any visitor to drink deeply from a well of natural beauty more permanent, effervescent, and pure than the myriad concerns that regularly hijack our consciousness.

“It was very queer, especially in dark nights, when your thoughts had wandered to vast and cosmogonal themes in other spheres, to feel this faint jerk, which came to interrupt your dreams and link you to Nature again.” (Walden, “The Ponds”)

While Emerson, Thoreau, and others in the transcendentalist strain of American Romanticism embraced a spirituality that erred in its verging on pantheism, they rightly understood the need for human beings to anchor themselves; to have a place to return to for consolation in high and low times; a place unchanged by the fashionable trends of the present day. In other words, a place apart.

For Thoreau, nature was not just a place, but a muse, and an inspiration for achieving a state of unity between body and soul, found in these incorruptible places; in sylvan landscapes, on rocky mountainsides, and deep within silver pools of water.

“Many a forenoon have I stolen away, preferring to spend thus the most valued part of the day; for I was rich, if not in money, in sunny hours and summer days, and spent them lavishly; nor do I regret that I did not waste more of them in the workshop or the teacher’s desk.” (Walden, “The Ponds”)

Further descriptions of Thoreau’s surreal experience on Walden’s waters seem to suggest nature maintained the power to not only hold his attention, but provoke his powerful imagination.

“In such transparent and seemingly bottomless water, reflecting the clouds, I seemed to be floating through the air as in a balloon, and their swimming impressed me as a kind of flight or hovering, as if they were a compact flock of birds passing just beneath my level on the right or left, their fins, like sails, set all around them.” (Walden, “The Ponds”)

Such romantic language, while poetically beautiful, leads many to a fair critique of Thoreau as somewhat blinded by nature’s beauty. Thoreau fails to recognize the benevolent Creator behind that which was beautifully and wonderfully created. What he does see, and what we can all learn from, is a view of nature as inherently good and fixed in the world. Whatever has corrupted his perception of nature is the result of his own lost innocence.

“It is itself unchanged, the same water which my youthful eyes fell on; all the change is in me.” (Walden, “The Ponds”)

Reflecting on my brief pilgrimage to Walden, I can recall my own shortcomings in this regard. How often have I heard nature’s beckoning, or been fortunate enough to experience something truly good and beautiful in this world, only to rebuff its invitation and continue living in a deluge of passivity?

“Nature has no human inhabitant who appreciates her. The birds with their plumage and their notes are in harmony with the flowers, but what youth or maiden conspires with the wild luxuriant beauty of Nature? She flourishes most alone, far from the towns where they reside. Talk of heaven! ye disgrace earth.” (Walden, “The Ponds”)

Adam Sylvain is a teacher and freelance writer based in Washington, DC. You can follow him on Twitter @agsylvain.