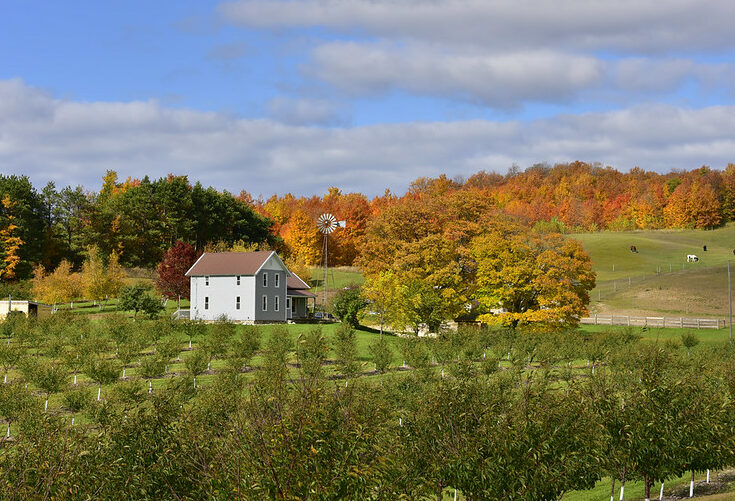 Reed Springs, MO. I confess I’m suspicious of nature writing. Though I am myself a minor practitioner of the genre, all too often it can be self-indulgent, smug, or dishonest. The nature writer risks adopting a pose—I am the Great Sage of the Wilderness. At its worst, nature writing flatters the writer and deceives the reader. Self-indulgent nature writing does not help the reader see nature but rather enchants with a delusion of the writer as the mystic woodsman that the reader (it is implicitly suggested) could never be.

Dishonest nature writing, far from helping readers get closer to nature, pushes them away because it invests them in a writer’s persona rather than Creation itself. If a book produces in the reader a fascination with a character rather than a place, it is properly a memoir, not concerned with nature at all. Nature writing that does its job ought to deepen the reader’s relationship with nature. It is for this reason that I often find high-quality field guides, rather than first-person explorers’ accounts, to be the most satisfying literature of the natural world. A well-done field guide models an attention to the wild that a personal narrative can seldom match. Writers like John McPhee, who mirror the technical precision and limited self-revelation of the field guide, earn my esteem as well.

Moreover, I worry that poorly done nature writing can be harmful to the very conservation cause that it aims to serve by reinforcing a vicious division between wilderness and other uses of the land. In his essay “Wild and Domestic,” Wendell Berry points out that

The so-called wilderness, from which we purposely exclude our workaday lives, is in fact a place of domestic order. It is inhabited, still, mainly by diverse communities of locally adapted creatures living, to an extent always limited, in competition with one another, but within a larger, ultimately mysterious order of interdependence and even cooperation. . . .

The wildest creatures to be found in any forest, if not surface miners and industrial loggers, are the industrial vacationers with their cars, cameras, computers, high-tech camping gear, and other disturbers of domestic tranquility and distracters of attention.

Accordingly, if in conservation or in nature writing we prioritize “wilderness areas,” we disregard their domesticity and subject both the wild and our workaday landscapes to the unconstrained exploitation, the wildness, of our extractive economy. If we prioritize parks and wilderness areas over our “domestic landscapes,” we therefore consign these less “special” places to “the servitude, excess, and violence of our continuing version of domesticity, which is to say our misnamed economy.” Nature writing, therefore, that invites readers to go on an exotic tour of some “wild” locale risks confirming in them the habit of using and abusing all sorts of land. Such writing risks affirming the wildness of our exploitive economy for the sake of a literary frisson. This is not a trade I am willing to make.

How then to practice this form in a way that respects the reader and the subject matter alike?

Nature writers must above all be honest, about nature and about themselves. They must reckon with the less scenic aspects not only of the natural world, but of the writer’s character—must acknowledge the moments of discomfort and distress that come to us all, whether we are out for a hike in the woods or merely walking around our subdivisions. They must help us see real places, not just romantic projections of the writer’s self-consciousness or political ideals. And to that end, nature writers ought to send us back to our own places, not just make us pine for some experience of “the wild” that gives us implicit psychic comfort as we pollute or destroy closer to home.

A recent book that meets these standards for honest and attentive nature writing is Tom Springer’s 2020 essay collection The Star in the Sycamore. In the subtitle to the book, Springer sets out his project: Discovering Nature’s Hidden Virtues in the Wild Nearby. Springer takes us to no grand vistas or far-flung locations but stays resolutely within the confines of Three Rivers, Michigan, a small Rust Belt city south of Kalamazoo. Far from positioning himself as a new John Muir, Springer’s posture and his subject matter remain resolutely humble: he’s a middle-aged guy with a couple of acres in the country, exploring the wildness of country dogs and street trees. The modesty of his material, though, should not cause us to overlook the importance of a work of nature writing that identifies the commonalities among wild and domestic landscapes rather than driving a wedge between the two.

Springer’s book, like his life, has deep roots in Three Rivers (he’s lived in the town all his life except for college in Kalamazoo, thirty miles north). The essays in The Star in the Sycamore explore both the town’s natural and its human geography: he forages for serviceberries and burns his backyard prairie plot; goes cross-country skiing and picks up empty bottles of Arbor Mist wine by the roadside; interviews local bakers, herbalists, and conservationists. The book features no spectacular wilderness areas or heroic journeys; rather, it provides a natural and cultural tour of the kind of place that more romantic nature writers overlook. For that, it’s invaluable.

The essay “A River Gone Wild in the City” perhaps best illustrates this accomplishment, as Springer explores the Portage River, overgrown with weeds in urban Three Rivers:

The river here, adjacent to a law office parking lot, winds like a comma through a deep wooded ravine. It’s no Midwestern Machu Picchu, but its ruins do tell a story of faded human conquest and natural renewal.

The Portage is adorned with the remnants of an old hydroelectric dam and powerhouse, defunct since 1971. The law offices, meanwhile, once hosted a nursery company that planted a fantastic rock garden, now overgrown with invasive myrtle. As Springer fishes his way down toward the dam, the river opens up to him:

An eternal mist—the Portage River atomized—hangs suspended over the lather. In the churn below, I catch and release my dozen bass quota and then some. Nothing monstrous, but able fighters all, and as dusk sets in I am sated. In late summer, you fish not just for immediate pleasure, but to store up satisfaction against the cold bleakness to come. This I have done in a forgotten little river gone wild in the city.

Springer has the Portage to himself this late summer evening, and this troubles him. He can remember when the children and teenagers of Three Rivers spent their summer evenings at the dam: “As a wild, local place we felt a kinship with it that was ours alone.” No longer. While the area had been an unofficial park before thanks to the public spirit of the nursery company, Springer argues it should now be made an official public park, “with access reopened that’s been denied since the land around it was sold.”

All this is appropriate enough for a work of nature writing as I have outlined it above: the essay stays close to home, uncovering nature in a place too readily used and abused for the purposes of the “wild” extractive economy. And it argues for constructive, healing use of this place marked by the wild and domestic alike. The essay invites us to see Three Rivers—and invites Three Rivers to examine itself as well.

But what makes the essay work is that Springer doesn’t stop with a policy recommendation. As he returns to his car in the deepening twilight, he stops to glance into the powerhouse, 150 feet downstream of the dam. Built in the era where even functional buildings received architectural ornamentation, it’s built of red brick and possesses a “graceful verticality.” Inside, however, “where every window has been shattered and the turbine and generator hauled away,” offers something more unsettling:

Water still rushes in from the pond through a concrete sluiceway. Except that where the turbine and generator stood, there’s a gaping round hole in the floor some nine feet across. Ten feet below that, as if in a primal basement flooded by a subterranean sea, there’s a three-foot diameter whirlpool.

The whirlpool at the center of the powerhouse might stand for the wild, as Berry understands it, entire: it forms in the aftermath of human use and abuse of the river, presenting Springer with a vision of spooky forces both human and nonhuman.

Perhaps this, above all, is the work of nature writing: to bring the wild and the domestic together and to reveal the mystery at the heart of both. That Springer’s book consistently does this is enough to commend it as a constructive entry in this vexed genre.