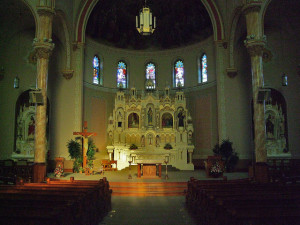 This is the fourth of a five-part series of essays on “Localism and the Universal Church.” You may find the previous installments here.

As I was saying . . . Since the First Sunday of Advent in 1964, parish life for many American Catholics has disintegrated in a disheartening way. We have seen a sudden imposition of new liturgical directives, most of which derived from misinterpreted documents of the Second Vatican Council. And so, we have seen what a totalitarian and bureaucratic vision can look like when its chief concerns are making everyone feel included and comfortable: it looks like hand holding and sounds like acoustic guitar, and at bottom it feels an awful lot like the familiar, tolerant banalities of a civilization entirely given over to the gods of the therapeutic. We know that “democracy” imposed from above can desecrate the sacred temple almost as effectively as it can tear down the venerable “profane” edifices constitutive of Christian culture.

Even in this period that witnessed one of the most unanticipated impositions of power from above in the history of the Church (for one anticipates the enforcement of orthodox doctrine, but how could one anticipate the Mass’s getting infected with the moonbeams of secular culture?), the Catholic Church has remained the most thoroughly localized and particular of bodies. The late Fr. Andrew Greeley smartly, if imprecisely, observed that, for most Catholics, their faith is not located in the Vatican, or in the Papacy, still less in the princes of the Church. It finds its expression in one particular parish, with its particular design and sacred art. Catholics pray to a God who is everywhere and yet who is specifically and specially present, body and blood, in their particular parish in the Sacrament of the Altar. The voice of the Catholic Church, suggests Greeley, is not the voice of its Magisterial documents, but of the parish priest at his pulpit, speaking to his flock in the pews; it is the voice of the parish in prayer; it is the voice of the particular stones of each parish church, usually built with the labor of its first parishioners. On this last point, I think of my old parish in South Bend, St. Patrick’s; it is one of the most beautiful small churches in the country, and was built entirely by its parishioners in their free hours after work in the factories just then opening in town. I think also of the Church of the Immaculate Conception, one of those twenty-five cross-tipped churches in the German Catholic redoubt of western Ohio, in whose faith my own family’s has shared for the last two centuries.

I have written elsewhere on the great scandal of the last two decades, the complicity of some members of the Church hierarchy in the concealing of the sexual abuse of children by priests. Given how terrible this conspiracy was in many of its details, one might justly wonder not that many Catholics ceased to practice their faith, but that so few did. In Boston, where the Church was most egregiously hit by the scandal, the pews supposedly emptied in response to the actions of Cardinal Law. Having lived in Boston prior to the scandal, I can say with some certainty that the pews were already empty before the scandal. I later discovered that, where they were not already empty, they were still not so in the wake of the scandal. Why this tenacity?

Greeley would suggest, I think, that, while many Catholics may increasingly suspect the hierarchy and the Bishops in particular, they still love their parish priest and their parish. Leaving aside those many persons most directly and painfully hurt by the instances of abuse, the anger of most Catholics was quite limited precisely because it would have had to have been directed at an abstraction with which their daily devotional life had little to do. One reads of the many young men in priestly formation who are themselves suspicious of a hierarchy that could so complacently allow such evils to continue, and yet they pursue their vocation to the Universal Church because of the particular call that Christ makes to each of them and because they wish to serve the universal call of each Catholic to holiness. This is a call that manifests itself in the lives of particular persons and not faceless abstractions, and it is in terms of those particulars that it must be understood. My own immediate response of the scandals was to go to Confession; the spectacle of evil, which threatens always to shroud the world, naturally leads us to try to carve out some small place of purity—to be at least better than we were.

To those familiar with his reputation, Greeley may seem an odd witness for me to summon. He was a theological liberal who evidently rejected many teachings of the Church—hardly a great authority in an essay professing to defend the Church. Even on the point I invoke him, he is a dubious authority. For, Greeley insistently opposed the “institutional” Church and Magisterial Tradition to the stones and faces of parish life, with their traditions of quotidian piety, loyalty to parish, and trove of stories. Catholicism is defensible for Greeley precisely because the authentic Church is not to be found in doctrine or hierarchy but in people, parish, and priest. He makes of the Church and the parish a dualism, with the more abstract universal always to be rejected in favor of the particular. This is to misunderstand both.

I see no reason to oppose these two things, for I do not understand them to be distinct in reality. The experience of the typical Catholic is indeed one of particular parishes and particular priests, of generations of loyalty to one Church building, which in turn bears the sacred scars of that loyalty in its stained glass, statues, the scratched wood of its pews. In such singularities we encounter the universal, the sacred aisle rendering the divine little less familiar to the prayerful than, in Denis Devlin’s words, their “village street.”

I do not mean to propose, as Greeley might have, that the Catholic Church’s local attachments are so good, and its universalizing order so irrelevant, that the person committed to natural community might find much good in it despite its structural “flaws,” that our kindly Father at Mass is a treasure despite the bureaucratic evils of Bishops. Rather, it is clear that Greeley has a point about how particularized is the experience of the typical Catholic’s devotional life. Indeed, to be Catholic is to know God as the Creator of all things, the adoptive Father of all men, and to know this without recourse to abstraction in the bad sense. We see this universal claim in the concrete life of the Church; we see it because we are in it. We see it rather than merely discursively reason toward it, because the Church is, in a term derived from Hegel, the Concrete Universal.

It is a theological commonplace (indeed, one on which Greeley relied in his work) to observe that if the central fact of Christianity is Jesus Christ, the central fact of Protestant Christianity lies in the atonement of Christ on the Cross, and the central fact of Catholicism proclaims itself in the Mystery of the Incarnation. Many familiar aphorisms of Protestant devotion may sound rather particularistic in much of their language of redemption: Christ died once and for all, we are justified in the Blood of Christ, the saved Christian has a “personal relationship with Christ,” or even the hokey historicism of “My boss is a Jewish Carpenter.” But this emphasis on the atonement lends itself to a pietistic spiritualization of Christianity that neglects its historical dimension: the history of salvation is within us, and only within us, taking place entirely on the briefly trampled inward stage conversion and rebirth. Revelation always points anxiously beyond its own form to a handful of universal claims or to a privately felt boundless love.

This tendency is what Hans Urs von Balthasar described as “the tragedy of Protestantism.” Though many Protestants in our day think of their faith as a rejection of the “Hellenistic” corruptions of Christianity, it has always been prey to a certain species of “Platonizing theology” in its understanding of Christianity as an essentially inward experience. It thus “has the tendency to make the objective image of God’s appearance in salvation-history, with Christ as its centre, become too quickly a transparency of the ‘formless’ light of divine glory; it has the tendency to dwell too much on the interior experience of how the Holy Spirit takes over command in one’s own spirit and to pay to little attention to the historical form of God’s glory, on which every interior spirit remains dependent.”

As I have outlined it, there is nothing absolutely false in this tragedy of abstraction wrongly understood. It is worth noting, indeed underscoring, that the Platonism of the Cambridge Platonists would eventually beget the Romantic ecclesiology of S.T. Coleridge, who in turn inspired Blessed John Henry Newman’s theology of development that conceived the True Church as a poetic community, a community where the universal finds expression in the interpretive concretions shared in in by the faithful—a train of thought that would lead Newman to the Catholic Church as the definite fact of Christianity. The discovery of this fact will lead off our next essay.

But, before turning to all that, let us consider that von Balthasar is speaking here only of a particular Platonizing tendency, and one to which Plato himself was immune; it is one to which all modern things are prone, from Descartes to Luther and Calvin, and I contend only that the lure of this tendency loses sight of a deeper truth, of the sort of particularism that Catholics celebrate in the Incarnation itself. The Word became flesh; Truth Itself became and is a person. He appears as the priest raises up the bread for consecration, and it is His living flesh that I eat, that we eat, at Mass on Sunday.