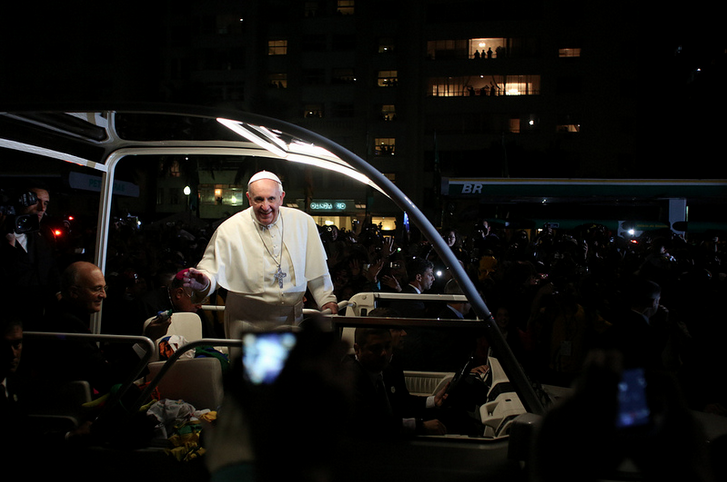 The responses from American Christians to Pope Francis’ encyclical Laudato Si’ have fallen into two predictable categories: Economic conservatives push back against Francis’ critique of “technoscience,” claiming that capitalism and technical innovation have made billions of people more prosperous. On the other hand, liberals who are more troubled by environmental degradation praise the Pope’s efforts to combat climate change. These two competing perspectives within American Christianity are by no means new; they have shaped environmental and public policy debates for centuries, and, in fact, both of them find their origins in the early Puritan settlers who came to the New World.

When the Puritan colonists arrived in America, they had a dual identity as both colonists and Christians. To ensure their survival, they needed to be economically successful, and many of them left the Old World motivated by the hope of better economic opportunities. Thus they tended to equate financial prosperity with divine favor. Yet at the same time, their theology genuinely valued the natural world as God’s revelatory creation. These two values — attaining individual financial success and delighting in the divine glory of creation — often came into conflict, and early Puritans struggled to imagine how they might be reconciled.

Reading through Puritan histories and sermons, one soon realizes that although they spoke often about the divine end that brought them to the New World, they did not apply their theology very carefully to considering how they should fulfill this end, and thus in practice Puritan colonists often looked like their secular counterparts. For instance, in his mammoth work of American history, Magnalia Christi Americana (1702), Cotton Mather criticizes the European colonists who came to America not to found a pure church, but to secure greater economic opportunities. Mather describes a congregation of such individuals who mocked a visiting Puritan preacher:

One of our Ministers … urged them to approve themselves a Religious People from this Consideration, That otherwise they would contradict the main end of Planting this Wilderness; whereupon a well-known Person, then in the Assembly, cry’d out, Sir, You are mistaken, you think you are Preaching to the People at the Bay; our main End was to catch Fish.

Ironically, Mather follows this incident by reporting that God judged these sacrilegious fishermen through the financial failure of their colony. In other words, Mather makes economic success the standard for God’s favor even as he criticizes the fishermen for pursuing economic ends.

Viewing economic prosperity as the marker of success in carrying out their divine errand corroborates Mather’s description of the New World elsewhere as “the Devil’s Territories.” Writing in the late seventeenth century about the recent witchcraft epidemic in Salem, Mather explains that it is perfectly natural to suppose the Devil would oppose the Puritan colonists because they are infringing on his territory:

The New-Englanders are a People of God settled in those, which were once the Devil’s Territories; and it may easily be supposed that the Devil was exceedingly disturbed, when he perceived such a People here accomplishing the Promise of old made unto our Blessed Jesus, That He should have the Utmost parts of the Earth for his Possession. … The Devil thus Irritated, immediately try’d all sorts of Methods to overturn this poor Plantation. … I believe, that never were more Satanical Devices used for the Unsettling of any People under the Sun, than what have been Employ’d for the Extirpation of the Vine which God has here Planted, Casting out the Heathen, and preparing a Room before it, and causing it to take deep Root, and fill the Land. (from The Wonders of the Invisible World)

Mather here links the wilderness and its savage inhabitants to the devil, and the settlers’ agricultural civilization to the advance of the Church. He is very clear about the religious end of these settlers — to be God’s people in this heathen land — but the practical means by which they should advance God’s church appear indistinguishable from the means of those immigrants who came to the New World to get wealthy off of the land. If the wilderness is indeed the devil’s territory, then turning this disordered nature into profitable natural resources — regardless of the consequences for the native inhabitants and the existing ecological order — would be a sign that God’s order is being brought to the New World.

But in this case “God’s” order begins to look very much like the economic order of the fishermen whose main end was to catch fish. Is there any practical difference, then, between those who are planting a restored church and those who are seeking financial profit? Both groups relate to the American wilderness as if their material wants are the standard of value by which nature should be ordered: one group simply states this aim outright, while the other claims that this reordering of wild nature signifies the advance of God’s church. As another Puritan historian, Edward Johnson, describes, “Nor could it be imagined, that this Wilderness should turn a mart for Merchants in so short a space. … Thus hath the Lord been pleased to turn one of the most hideous, boundless, and unknown Wildernesses in the world in an instant … to a well-ordered Commonwealth, and all to serve his Churches.” Thus, as William Cronon points out in Changes in the Land, European colonists in New England, regardless of their ostensibly religious aims, tended to view the natural landscape in terms of its commodity value.

However, the Puritan legacy is a bit more complicated than these colonial sentiments suggest. John Winthrop articulated a more balanced approach, claiming: “The whole earth is the Lords garden & he hath given it to the Sonnes of men … : the end is double & naturall, that man might enjoy the fruits of the earth, & God might have his due glory from the creature.” Winthrop’s theology thus limits human use of natural resources in important ways: humans should enjoy the fruits of the earth in a manner that enables God’s creation to give Him glory.

Even Cotton Mather, in an apparent contradiction of his earlier claim that New England is the “Devil’s Territories,” calls creation “God’s temple” in which humans should serve as priests of reconciliation:

[Man] discharges also the Office of a Priest for the Creation, under the Influences of an admirable Saviour, and therein asserts and assures his Title unto that Priesthood, which the Blessedness of the future State will very much consist in being advanced to. The whole World is indeed a Temple of GOD, built and fill’d by that Almighty Architect; and in this Temple, every such one, affecting himself with the Occasions for it, will speak of His Glory. (from The Christian Philosopher)

Mather’s metaphor contained the seeds that later American Christians would cultivate into a full-fledged theology of creation care. And yet as Mather’s conflicted record on these issues attests, reconciling this theology of creation with capitalist economics proves challenging. Mather and the other Puritans vacillate between trying to conquer the wilderness in order to make it profitable or, alternatively, valorizing untainted wilderness for its pure religious value. What they failed to imagine was an economy that could account for both spiritual and physical values.

The subtitle of Francis’ encyclical, “On Care for our Common Home,” subtly nods to the importance of bringing economics and ecology together through their shared foundation in the home or oikos. This Greek word simply means household, and it’s the root of both economy and ecology. Indeed, oikos also has ecclesial connotations; St. Paul uses it repeatedly to describe the “household” of faith. When Francis describes an “integral ecology” that values humans and the other members of creation, he’s describing the kind of economic, ecological, and even ecclesial order needed to properly care for our home.

This effort to imagine a household order that includes humans, creation, and the Creator animates much of the best American nature writing over the past two centuries. Such imaginative work can be found throughout the pages of American literature, from Henry David Thoreau’s attempts to live simply so that all the members of creation can glorify and enjoy God, to John Muir’s work to create National Parks where Americans could be baptized in the beauty of wilderness, to Willa Cather’s vision of gardener-priests who sacrifice their individual desires to serve the flourishing of others, to Wendell Berry’s defense of small farms maintained by loving, intergenerational communities. In the complex, multidimensional orders imagined by these authors we find the synthesis needed to hear Pope Francis’ message of care for our common home.

Portions of this essay are adapted from Jeffrey Bilbro’s new book Loving God’s Wildness: The Christian Roots of Ecological Ethics in American Literature.