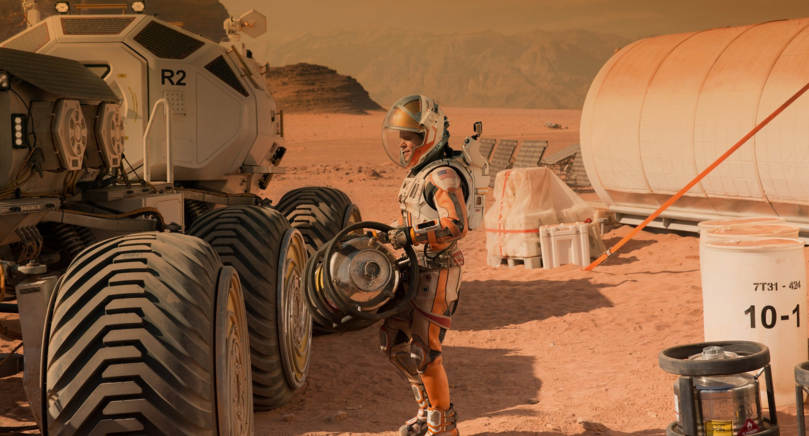 Recently, I watched as the people of Earth came together to bring The Martian home. Interstellar, Gravity, and Wall-E all tell the “lost in space” tale with more filmmaking skill and subtlety. But despite its over-reliance on shots of applauding crowds, the latest movie from Ridley Scott does make one important moral point: every human life matters. A week before my late show screening, I was in the real life hills of Appalachia where the message is starkly different. Maria Gunnoe, a resident of rural West Virginia whose grassroots activism earned her the Goldman Environmental Prize, once said of the nation’s attitude toward people like her, “We’re expendable.”

On the big screen, Matt Damon used potatoes, duct tape, and MacGyver type skills to turn the bare soil of Mars into a garden. Back on the third rock from the sun, mountaintop removal coal mining (MTR) turns a verdant forest filled with plants both edible and medicinal into something resembling an alien landscape. Explosives that are measured in the millions of pounds per day have remade the terrain on a colossal scale, dropping peaks by hundreds of feet and filling in valleys where clear streams once flowed. Over 500 mountains and an area the size of Delaware has been blasted out of the ancient Appalachians, but those just passing through will not glimpse much from the protected viewsheds along the interstates of Kentucky, Virginia, Tennessee, and West Virginia.

Invited by the grassroots group Christians for the Mountains to come and see, I found myself flying over Earth’s blistered skin in a small Cessna on October 4th, the Feast of Saint Francis of Assisi. In places, the folds of West Virginia still stretched out for miles under a green leafy blanket that was just starting to show signs of autumn. Of course, the virgin forests are long gone, having fallen to the saws of settlers and profiteers who pushed the frontier ever westward. But nature has healed enough to make West Virginia’s slogan “Wild and Wonderful” again seem plausible.

From above, though, the massive MTR lesions are never out of sight. Here, the scar of a “reclaimed” mine that has been hydro-seeded with quick growing grasses to provide a veneer of green. There, the open sore of an active strip-mine oozed its black rock into massive machines that looked like Tonka toys from miles away. 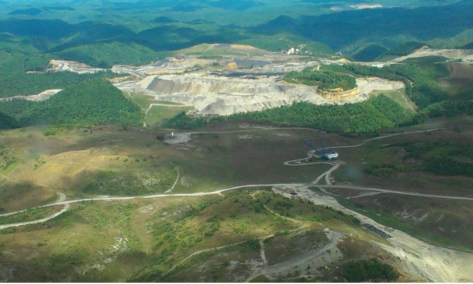 The damage is of such an overwhelming enormity that it can bury the fact of real flesh and blood people living at the edges of these blasting zones, breathing in tiny daggers too small to see. These “ultrafine particles” are absorbed deep within the lungs and can also later cross the placental barrier that protects an unborn child. Research by Dr. Michael McCawley of the West Virginia University School of Public Health and others have shown that people living in areas around MTR sites are significantly less healthy than those who reside in otherwise similar mountain communities. Birth defects, heart diseases, cancers, and respiratory conditions like asthma are among the maladies showing up at significantly increased rates.

McCawley’s testing equipment was used to help uncover the Volkswagen emissions fraud that led that company’s CEO to resign. What those instruments have found in Appalachia, however, has largely stayed off the media map, and drumbeats for changes to the coal industry are muted by the industry’s over-amplified “war on coal” rhetoric and local economics. Driving a coal truck is often one of the few jobs in town and many people are slow to speak out against a practice that keeps a neighbor employed.  Ironically, strip mining became a favored technique largely because it dramatically reduced labor costs. In a bottom line world, dynamite that obliterates its way down to the coal seam does the work much more cheaply than unionized men who once gathered the black rock from below. The loss of a mountain, human lives, or a way of life does not enter the calculus.

This year the Feast of Saint Francis also fell on what the Catholic bishops deemed “Respect Life Sunday,” a reminder from the calendar that the natural and human spheres are tightly interwoven, a theme that Pope Francis emphasized in his encyclical Laudato Si and during his recent visit. Elements of the coal industry seem to have little regard for life, though. In 2004, a thousand pound boulder from an MTR site rolled down a hill in the middle of the night and killed three year old Jeremy Davidson as he slept in his bed near Appalachia, Virginia. After the shock, some thought the death of a child might be a catalyst for major reforms, but the outcry was small and short-lived, like Jeremy. Some regulatory tweaks provided a bit more protection against boulders but little against the other hazards of coal country.

Appalachian children, like those of Marsh Fork Elementary, continued to find themselves in harm’s way. After MTR came to town in the 1980s, this longstanding place of education in the Big Coal River valley found itself surrounded by an industrial infrastructure. Over the ridge, explosives were whittling the mountain away, and the coal was finding its way to a processing plant next door. The rock was pulverized and sprayed with a variety of chemicals. The fine coal was next sent up a conveyor belt and dumped into a silo towering over the campus—raining down dust on an increasingly sick student body. Bound for power plants across the nation, the coal was then loaded into trains just behind the school. (Diesel locomotives are a major source of ultrafine particle pollution.) Just up the mountain, three billion gallons of toxic waste slurry were stored behind a sometimes leaky earthen dam situated not far from the daily blasting.

The Massey Energy subsidiary that encircled the school seemed incapable of admitting that children and an industrial coal operation might not be the best neighbors. Incidentally, Don Blankenship, the former CEO of Massey, is currently on trial in federal court, alleged to have conspired to circumvent safety regulations that, if followed, likely would have prevented an underground explosion that killed 29 miners in 2010 just a few miles down the road from the school.

After years of protests, lobbying, and fundraising, the anti-MTR movement scored one of its few victories. With a major assist from the Annenberg Foundation, the students of Marsh Fork Elementary were finally able to begin studying at a new school in 2013. There, they were no longer coated with coal dust or in danger of being deluged by sludge. Today, the overgrown playground stands as an oddly positive testament to the tenacity of local people who have done everything in their limited power to protect the next generation. 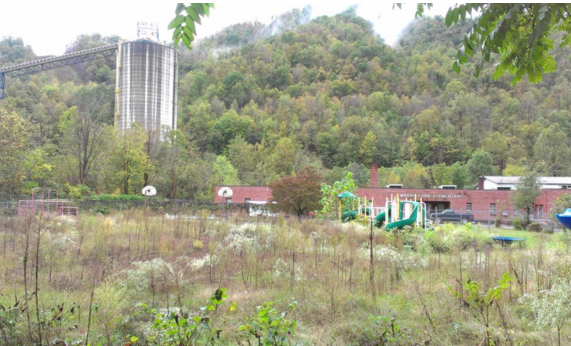 A far cry from stereotypical tree huggers, these unlikely activists are generally tradition-loving, God-fearing, and often gun-toting. Bo Webb is a sixth generation native of the Coal River Valley who returned to his roots after time away in Cleveland seeking a quiet country life where he could spend his weekends hunting and riding his Harley. He is quick to point out that he was not drafted, but volunteered for the Marines and served in Vietnam. When his backyard began to rumble and the woods started to fall, the old fighter in him took over and Webb has been battling ever since in a struggle that has seen its casualties. A few years ago, Webb lost his wife to an aggressive lung cancer that may have had its roots in the less than pristine mountain air they breathed. Today, he is working to pass a federal law addressing the Appalachian Communities Health Emergency, the ACHE Act, to comprehensively study the impacts of MTR on people.

Larry Gibson, a man of diminutive height but indomitable courage, turned down millions and protected 50 acres of family land on Kayford Mountain. The coal companies eventually mined around it on three sides. While mourning the lost landscape of his youth, Gibson turned his unique vantage point into a window on the often hidden world of mountaintop removal. His little peninsula of green became a rallying place for the anti-MTR movement and welcomed hundreds of visitors from college students to journalists. His dog was killed by thugs and Gibson himself endured numerous potentially deadly harassments (as well as the indifference of local law enforcement). Boulders were blasted onto his property, and as the neighboring land was torn away, a long fissure arose on Gibson’s tract, as though the earth itself had been stabbed with a knife. Through it all, Gibson was fearless and hard to miss in his neon yellow Keeper of the Mountains shirt that proclaimed, “Love Them or Leave Them, Just Don’t Destroy Them!” He died in 2012 of a heart attack doing what he loved to do, caring for his home in the hills.

Allen Johnson, who heads up Christians for the Mountains, settled in West Virginia after college, finding a few acres where he could build a home with his own hands and raise much of his family’s food from the ground. He and his wife also raised and educated four boys, being among the first home-schoolers in the state. In his 40s, Johnson felt called to a theological graduate program, juggling parenting responsibilities with his studies in Philadelphia under Ron Sider. Johnson then helped Sider launch the Evangelical Environmental Network in 1993. By 2004, seeing what was being inflicted upon his coal country neighbors, he joined with some fellow believers to start Christians for the Mountains. Pro-life and pro-traditional marriage, Johnson does not always fit into the lefty green crowd with whom he overlaps, but that is alright by him — the first label he wants to be tagged with is “Christian” not “environmentalist.” Johnson is more concerned with supporting life in its fullness and the place where he has chosen to live rather than upholding all the tenets of modern liberalism.

We earthlings may flock to a film about rescuing an astronaut marooned on another planet, but we have a harder time seeing and sympathizing with the common people tucked into the forgotten cracks of our own blue marble. Cheap power comes at a high cost to them. Those who respect land, life and the Creator behind it all can instead extend the hand of fellowship to our neighbors with whom we are unknowingly connected each time we flip on the light switch.

John Murdock is an attorney who writes from Texas.  His online outpost is johnmurdock.org.