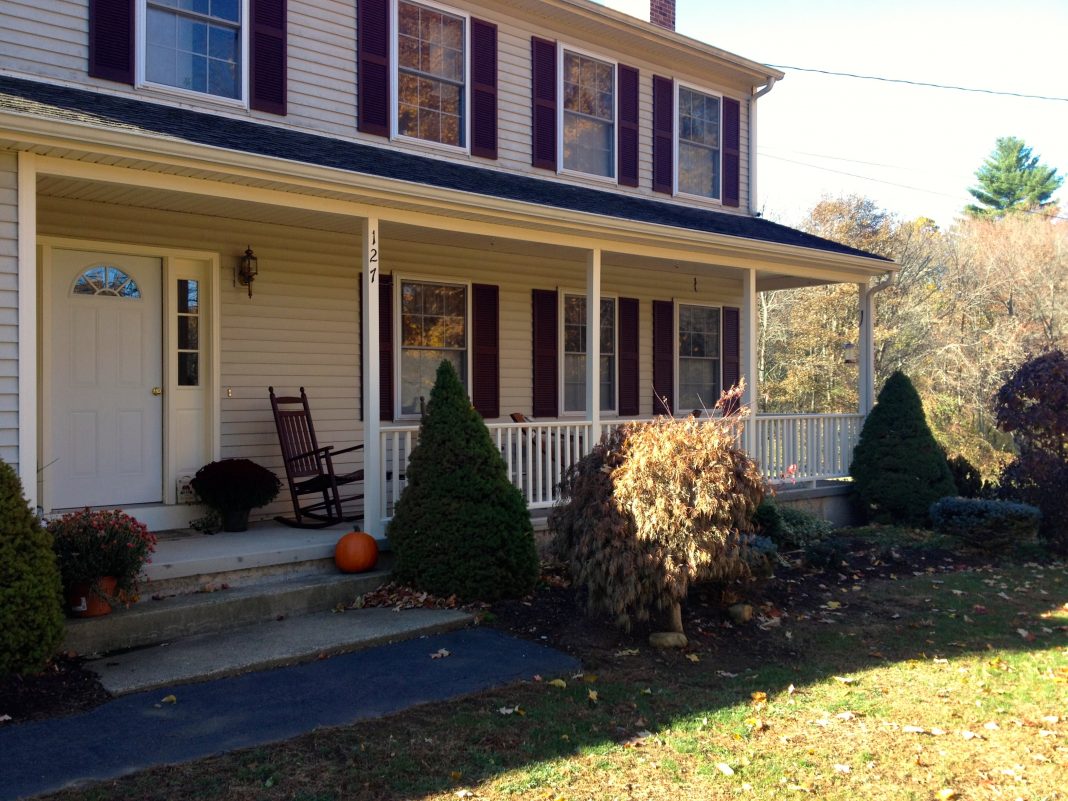 I heard someone say recently, “Porches are back. They’re on all the new houses.” And I thought, “No, no they’re not.”

Porches on newer houses are hardly more than façades, sort of like shutters. My shutters don’t even shut; and if you have them I bet yours don’t either. Real shutters came with hinges in the old days. Back then, when a storm came through, you shut them. Usually they were louvered so a little light could filter in. But they lost their jobs when storm windows came along. You may remember those, or you may not. They were replaced by the double-paned, vinyl-clad, tilt-in-to-clean, windows we have today.

The reason we still have things that we like to call shutters is because they look nice.  They’re like mascara for houses. Mine are made of plastic and they’re screwed on. When I think about them I feel a little like a fraud, so I don’t. And this is the reason people put faux porches on houses today. They look nice; they make houses look “homey”.

I’ve been thinking about porches lately because I just replaced the handrail on mine.

After three fixer-uppers in twelve years I was ready for a new house. And so I bought nearly new—it was just three years old at time of purchase. But I was kidding myself. It was a charmless modern box. I’ve been working on it ever since, turning it into a home.

It’s a farmhouse colonial without the farm part. That means it’s a two-story with a porch running along the front. As far as newer houses go, the porch is better than most, but it had three problems. One I could fix—the handrail. But the others I’ll just have to live with. 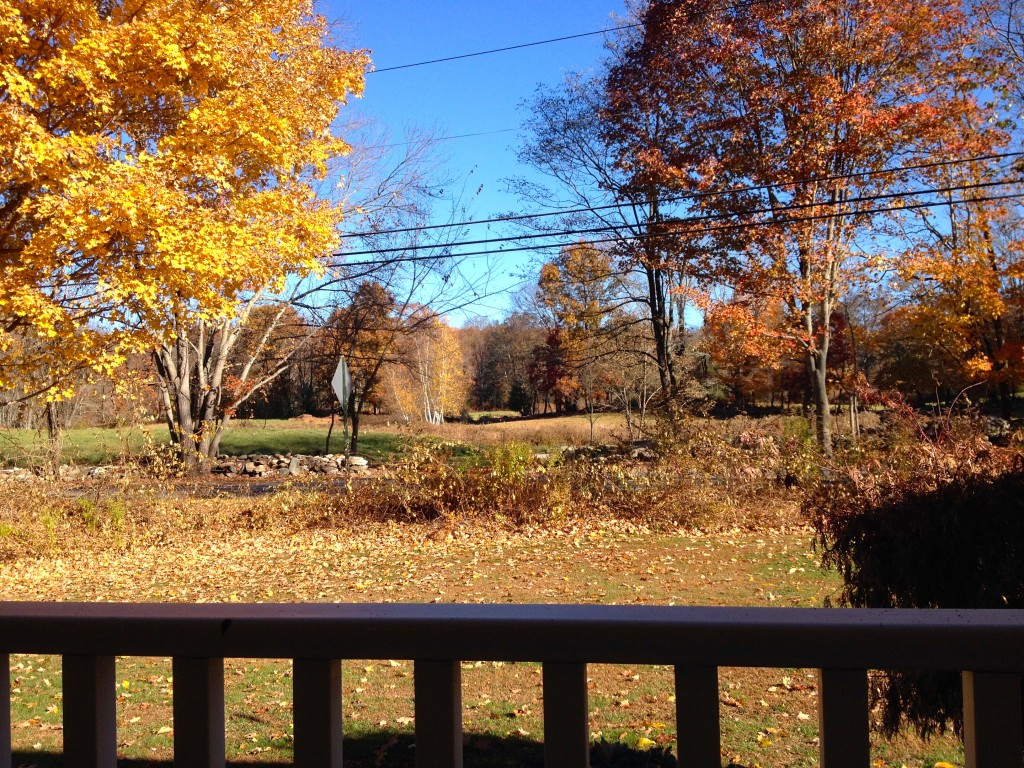 So how do you get a porch right? Well, you have to remember what it is for. It’s an in-between space separating the sheltered inside and the wide-open outside. You may think that’s almost too obvious to mention. But this is just where most new porches fail.

Houses shelter us from two things: the elements and other people. A porch that works gives you partial exposure to both.

Let’s start with the elements. Sometimes you want to step out for a little air, or maybe a better view, or you may even want to hear the sound of the rain without getting wet. The exception is sunshine. You don’t go on the porch for that. If you want sun, you want a deck. This brings me to a big reason porches on contemporary houses don’t work—they’re not deep enough. To stay out of the sun in summer, or the rain in a downpour, a porch should be at least eight feet deep. If it’s too shallow, you might as well be on a deck.

Old porches almost always meet this standard. That’s because people actually used them. When central air conditioning invaded out homes one of the chief reasons for stepping outside was lost. Now a porch is a place to put that rocker that you bought on a whim at Cracker Barrel or a pumpkin or two at Halloween. My porch is just a little over six feet deep. That’s passable in my case, since it is on the north side of the house. But when it rains I am driven inside, which is a shame since a enjoying a good lightning storm is one of the best things about a porch. 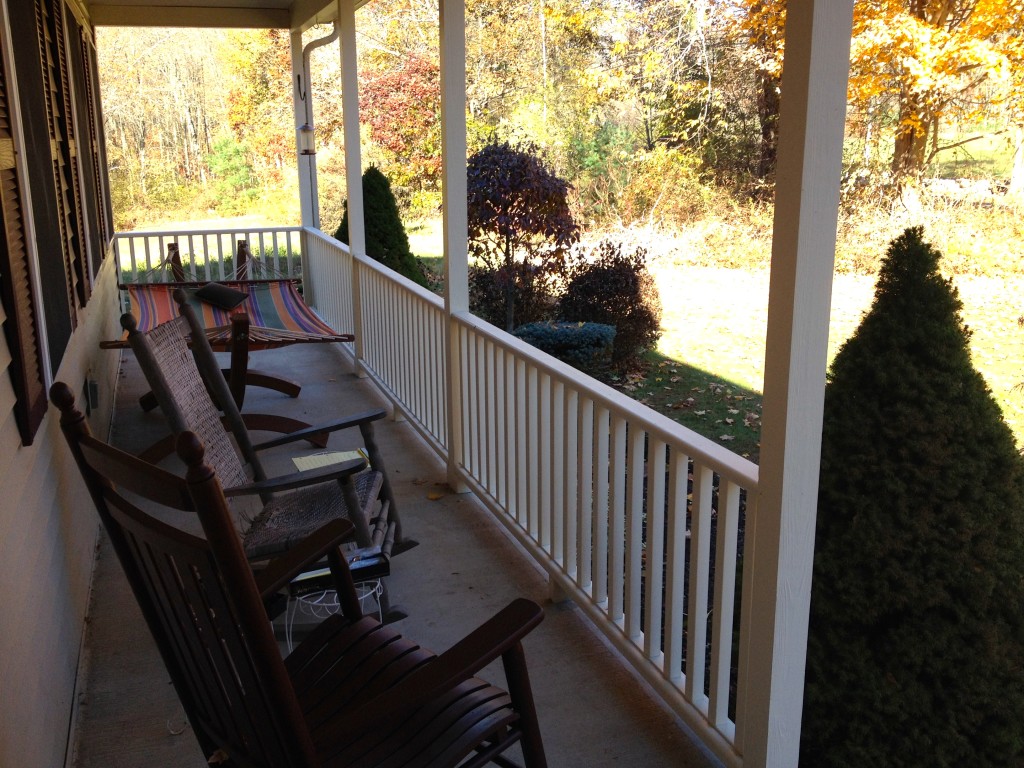 But I can’t change that without a lot of demolition. But I did address another problem with my porch at relatively little expense. I lowered the handrail.

A handrail gives you shelter from other people. But whereas shallow porches don’t give you enough shelter from the elements, most contemporary handrails give you too much. They’re just too stinking high. And that’s because people have confused them with safety rails.

You want to be able to see over the thing when you’re sitting down. You’re out there, in part for the view, but also so other people can view you. You still want something in between; you don’t want to foist yourself on them when they’re out for a walk. You just want them to know you’re there. A handrail says—“Say hello if you’d like, but if you don’t, that’s fine too.” No rail leaves you naked, and that’s awkward for everybody. A rail clothes you. But when it is too high, it veils you; and a veil seems to say, “Do not disturb”.

The rails on old porches tend to be 32 inches high or lower, some as low as 24 inches. Most rails these days are 40 inches and higher—often right at eye-level for someone in a chair. The reasons have to do with building codes and the confusion surrounding what they’re for—those things and skinflint builders.

Building code usually sets the safety rail height at 36 inches, a tad high for a porch, but tolerable if you’re tall. But that’s still six inches lower than the 42 inch rail I just replaced. Where did the additional six inches come from? That’s where the skinflint comes in.

Because certain rail designs call for a full 36-inch baluster to meet code balusters come 36 inches long (or longer) straight from the manufacturer. But even when the rail design doesn’t call for a 36-inch baluster many contractors leave them that long. Cutting them is labor intensive, usually calling for 2 cuts per baluster because the baluster’s profile. (If it’s been turned on a lathe, the profile should be evenly spaced between the top and bottom rails.) Since labor is usually the biggest expense in construction, the generally rule of thumb for contractors is the fewer cuts the better. So balusters are often taken directly from the box and attached to the top and bottom rails. And since those rails are usually 1 and a half inches thick, that gives you an additional 3 inches, bringing you up to 39 inches. Naturally you need a space beneath the lower rail to allow water to escape and to keep people from stubbing their toes. So add another 3 inches and voila, you’ve got a 42-inch rail.

A couple of more things that you’ll need for a porch as I’m thinking about it; first, it should be the right distance from the road. A porch that is too far back can’t support a conversation. People not only need to be able to see you, they need to be able to hear you. Mine is about 50 feet back from the curb—about as far back as you can go without having to shout to be heard. You still need to raise your voice, but it isn’t too taxing. Even most elderly people can manage it. 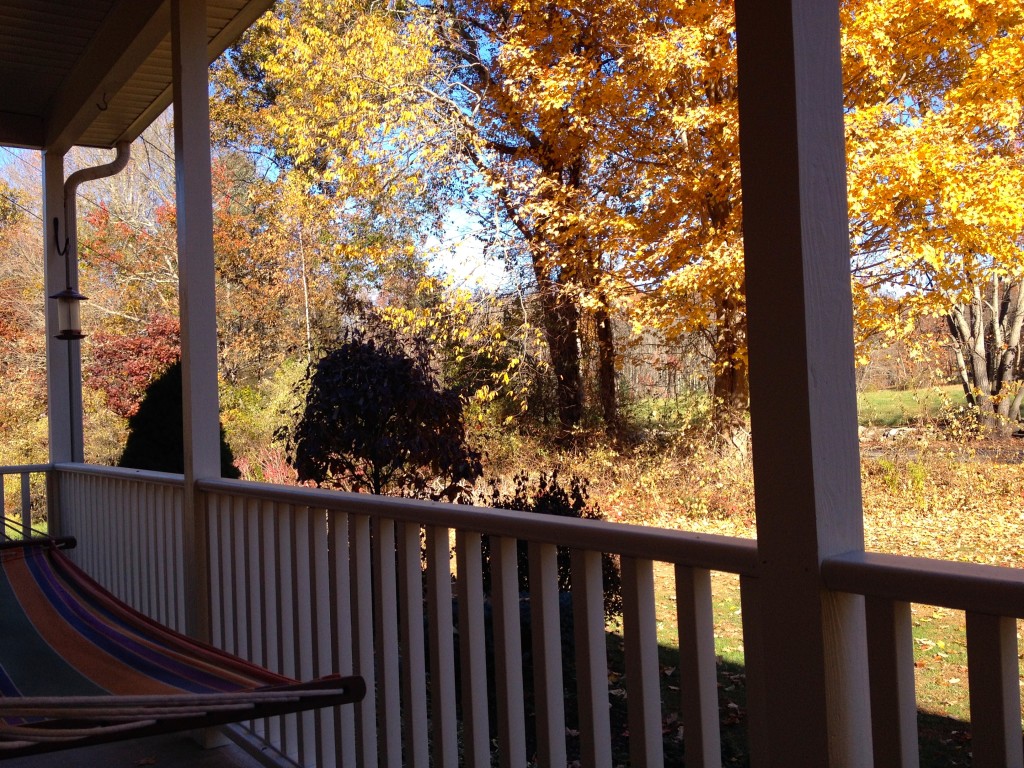 Now here’s the last thing—something I can’t fix on mine. A porch needs to be in a neighborhood where people know what porches are for.

I live in New England—a notoriously cold place in more ways than one—and I live in the country, right across the way from Tracy’s field. Tracy lives alone in a Cape-style home built sometime in the 1750s. (Yes, you read that correctly.) In the afternoons she putters around in her lawn tractor and since I’m her pastor she has to wave back when I wave to her. But there are plenty of folk who don’t know me or apparently want to who pass by: joggers, dog walkers, the farmer down the street chugging by on his Farmall, neighborhood boys on bikes (we still have those). Mostly they’re unsettled by the guy on the porch. That’d be me.

This may have to do with just having a porch. It’s just about the only one around. (Oh, there’s the Gorsky’s porch, but it has to be three hundred yards back from the road.) You see, the porch is something of an import. New England vernacular just doesn’t speak porch—capes, saltboxes, true colonials—nary a porch in the bunch. Porches are most at home in warm weather states where they once had a function. (Here in New England you still find homes without central air conditioning, believe it or not.) Now it is true that we have them on town greens and in the old mill towns, but those were built in the 19th century and were inspired by designs in house books published by enterprising architects. But even those porches tend to be places to store firewood for winter rather than to sitting out on in the summer.

But it may not have anything to do with New England at all. It may just be that sitting outside and hoping for a little neighborliness makes you an undesirable neighbor these days.

I do get out and about in my neighborhood. Two or three times a week I go for a run. And I’ve discovered that I’m not the only person sitting out. There’s Joe, the metal sculptor. We exchange waves. He doesn’t have a porch, but he does sit out in a lawn chair in front of his garage workshop. (It must get hot in there with all the welding stuff.) He’s surrounded by the work of his hands. There’s the eight-foot wide spider made out of rebar—an early work—then there’s the sheet metal tree frog that’s the size of a small car. His yard is covered with oversized creepy-crawlies. (Apparently Joe is having trouble moving inventory.) Then there’s the Wizard of Tolland just around the bend. (I’m not joking—we have a guy who thinks he’s a wizard: robe, pointy hat, long beard, the works.) He drives a Subaru with a sign that reads, “Wizard of Tolland”.  He’s usually having tea, enthroned upon a cast iron ornamental chair, the sort no one ever seems to use. I think he likes me, he gives me a thumbs up when I go running by. I wave back.

And there you have it. If you sit out on your porch you may be numbered with the artists and the mentally ill. Considering the new normal, it may not be a bad thing. This requires a gracious indifference to the opinions of others, something artists and the insane are known for. Well, that’s my thoughts on the porch. Now I’m off to enjoy a pipe on mine and annoy my neighbors with a little neighborliness.

(All pictures are of Mr. Wiley’s porch with its new rail.)