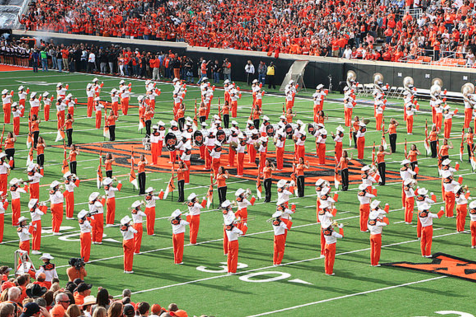 I’d been through this movie before. Streets closed to traffic, a procession of elite athletes before tens of thousands of spectators. And then the cheers turned into screams. Abandoned strollers rolled away. Scores injured, and some dead.

Scenes from the 2013 Boston Marathon flashed before me on October 24, when a 25-year-old woman drove her car into the crowd at Oklahoma State University’s Homecoming parade. Though completely different in circumstance, both events started in pomp and ended in horror. In Boston, three died, in Stillwater, four. Both took the lives an international student and a young child. Bodies flung in the air. An iconic sporting event was marred forever.

This past week, the residents of my new home in Stillwater, Oklahoma demonstrated the same heroism and resilience I witnessed when I lived in Boston in 2013. Many ran toward the chaos instead of from it. The car crashed at 10:31 a.m, but the 2:30 p.m. football game went on. It might sound tasteless at first, but the stadium ended up a perfect stowaway for 60,000 bewildered spectators, giving police and first-responders five or six precious hours of empty streets. With the kick-off came a moment of silence dedicated to the victims. Online, a hashtag fluttered, a variation on familiar theme: #StillwaterStrong.

It’s protocol: tragedy strikes and the community emerges more united ever. For a little while, the rest of the country will watch OSU bounce back with candlelight vigils, fundraisers, and makeshift memorials. Revival is guaranteed. Next year’s Homecoming will undoubtedly be the biggest ever. Go Pokes, etc.

Before moving here, my impression of Oklahoma was a reel of calamitous headlines scored by Rogers and Hammerstein — tornadoes, manmade earthquakes, botched executions and the deadliest domestic terrorist attack in American history. A frequent punchline, this reddest of states was not my ideal destination. But like many other aspiring academics, I was lured to middle America by the one thing an east coast city couldn’t offer me: a full-time job with benefits. I figured a Research-I school like Oklahoma State University was big and reputable enough to host at least a few people with whom I could relate. I’ve found those few, but I miss Boston every day. How could I have traded clam chowder for fried catfish, duckboats for tumbleweeds, and the Charles River for a Walmart parking lot?

I’ve never been a fan of football. I can never tell where I’m supposed to be looking. A year ago, sitting in my Cambridge apartment, I would have glanced at headlines about the homecoming parade and echoed others in criticizing OSU for not cancelling the game, lambasting the cultish influence of the sport in this part of the country. But now that I live here, now that I’ve walked through the sea of orange, I get it. I don’t relate to it, but I get it. The game absolutely should have gone on, and people on the other side of the country should not weigh in on whether our grief is to their taste.

In a way, the Marathon is the city of Boston’s homecoming weekend, a parade of tradition and determination attended by new friends and old. In the weeks after the explosions, Boston felt like a small town; displaced travelers were welcomed into strangers’ homes, passersby said hello on the streets. Kind of like how people treat each other every day in Stillwater, Oklahoma.

Once again, it’s taken a senseless act of violence for me to appreciate my surroundings. People sure are friendly in Oklahoma. There’s always a silky breeze, and the sunsets stop me in my tracks. I’ve learned a lot from not fitting in. If I hadn’t left I wouldn’t have realized it: “Boston Strong” has very little to do with Boston. Her hometown pride is genuine, exceptional even, but it’s not the source. Strength doesn’t come from the backdrop. You can channel it anywhere. Boston Strong is Stillwater Strong is Paris Strong is Mumbai Strong. The headlines change, but resilience never stops trending.

Susannah Clark is an award-winning essayist living in Oklahoma. Her work has been published in Flyway, Popmatters, Inside Higher Ed, and elsewhere. She holds an MFA from Emerson College, and serves as the managing editor of The Collapsar.

The Oklahoma Abortion Law and SUVs