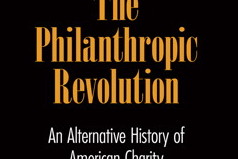 [Editor’s Note: Late last month, American Philanthropic hosted a launch party for Jeremy Beer’s new book The Philanthropic Revolution. Jeremy is one of the founders of FPR, and remains one of our great friends and supporters. We are proud to feature his friend Willam Schambra’s fine reflection on Jeremy’s book, which we strongly encourage readers to purchase and read for themselves.]

Jeremy’s wonderful new book illuminates a question at the heart of American philanthropy:  Can we be charitable or loving toward our fellow human beings, without almost immediately seeking to categorize, chastise, catechize, organize, euthanize, calibrate, agitate, incarcerate, or castrate them?

Today’s philanthropic colossus is certainly all about top-down, coercive manipulation of human lives according to blueprints drawn up in the gleaming towers of the Ford and Gates Foundations. Nonetheless, when was coercion in some form ever not our intention toward the poor? Jeremy quietly but firmly puts this question to each charitable epoch going back to the days when the Goodwill truck was a chariot.  His conclusions are not encouraging.

However manipulative today’s progressive philanthropies are, for instance, it’s difficult to find any relief from coercive intent among conservatives. Adopting Marvin Olasky’s admiration for nineteenth century Charity Organization Societies, conservatives opt for charities that categorize and catechize — that sort out the worthy from the unworthy poor through a figurative return to the woodyard, when feeding and housing came only after chopping.

Even within the early Christian practice of alms-giving, and even though the alms-giver explicitly refrained from attempting to change or improve the poor, nonetheless one cannot help but feel the giver was “commodifying” the poor, converting material generosity on earth into treasury laid up in heaven.

So is it ever possible to practice charity or love for our less fortunate neighbors without ultimately wishing to make them over in our own image?

As I’ve wrestled with this question, I’ve watched again and again a videotape made last year under the auspices of a group named Opportunity Lives.   It’s part of what’s called the Comeback series, and although all six tapes are worth your attention, the one I have particularly in mind is entitled “Transformation.” It features Greg Bradford, whom we first meet talking to then vice presidential candidate Paul Ryan, in the midst of his campaign swing through Ohio in 2012.

With late summer cicadas drumming in the background, Greg proudly shows Ryan a certificate indicating that he has just paid off the last of his parole fines and fees for supervision, in the amount of $776.  We soon learn that after a lifetime of crime and drug addiction, Greg has now become a responsible, tax-paying citizen and a loving, devoted husband to his wife and father to his two children.

I watch this tape repeatedly because I want to know:  how did this happen?  What finally changed Greg, after all the other approaches – the chastising, categorizing, and incarcerating – had failed? It seems so simple.  Paul Grodell, another lavishly tattooed, leather-vest-wearing, Harley-riding former addict, came over one evening to Greg’s house, in order simply to talk.  As Greg notes “we talked for hours . . . heart and love and tears, we laughed together and cried together.  For the first time ever, there was some man who didn’t want anything from me but to see me get healthy, and I felt that.  This transformation thing way inside, it’s a condition, a heart condition. God’s going to send a man to a man to do the work.”

I’ve warned Paul and Greg that some day I want the transcript of that conversation, so that I can do a nationwide, twelve-city replication.  But I know that it really wasn’t the explicit content that made the difference.  It’s the fact that, as Greg points out, for the first time ever, there came and sat down beside him, in the midst of his addiction, and without precondition – no chastising, catechizing, or categorizing — a man who didn’t want anything from Greg but to see him get healthy.

And now Greg and Paul are working together to renovate an abandoned school in Elyria, Ohio, to house Beyond the Walls, their ministry to the addicted, abused, and homeless.  There, as Greg puts it, people are “going to know they’re coming to get love, not just a place to bed down.”

Throughout the Comeback videos, and indeed throughout the grassroots, typically faith-based groups that my mentor Bob Woodson supplied for the videos, this kind of encounter is the heart and soul of what happens.  An intense, face-to-face relationship is forged in love between two individuals who are quite similar, though one is currently suffering a problem from which the other suffered as well, not so long ago.

This, I would say, is genuine charity.  It’s free of coercive ends or means; free even of concern about transferring deposits from our earthly treasury into the celestial bank.  It certainly captures the kind of love displayed by Jesus of Nazareth, whose philanthropic theory of change seemed to be limited to dining with and befriending society’s most despised.

In one familiar encounter, Jesus is presented with an adulterous woman, to whom the mob is eager to administer the fashionable charitable technique of stoning. Jesus quietly suggests that the stoning begin with the person who is not an adulterer, an addict, a criminal.  He thereby radically undermines the moral distinctions that propel our determination to remake the poor and marginalized in the image of our own self-proclaimed virtues, and reminds us of our equality in brokenness. He refuses to condemn her, but simply sends her on her way, trusting her to voluntarily meet the maddeningly vague, immeasurable outcome of sinning no more.

Insofar as the alms-giving tradition does point toward this kind of charity, it is, as Jeremy observes, when giving is done “in order to imitate God’s total self-giving,” as a statement of faith that the world is “founded upon charity.” But from the standpoint of those who want to “make a difference” through their charitable activities – to “change the world,” as we hear so often — this approach presents a profound paradox.

Needless to say, this is not the prevailing point of view within public policy or philanthropy.   Most of our social programs aim to compel behavioral changes in their clients through a complex mix of material incentives and disincentives, administered by credentialed experts in finely calibrated dosages, with readily measurable outcomes.

Where there should be a conversation between equals sharing a common brokenness, instead there is the patronizing condescension of the expert.

Where there should be personal trust and warmth, instead there is the cold detachment of the salaried professional.

Where there should be quiet fellowship, instead there is frantic, noisy pushing and shoving and cajoling.

Where there should be love and acceptance, instead there is judgment and manipulation.

But this is where Jeremy’s new kind of philanthropy – what he has christened philanthrolocalism – comes in.  As he describes it, “it posits that the primary purpose of philanthropy ought to be to increase opportunities for and strengthen the possibilities of authentic human communion.”

Now, there’s a mission statement that won’t ring down the halls of Hewlett or Pew or Kellogg any time soon.  And yet communion is indeed the perfect way to describe the relationship forged between Paul and Greg, into which the two of them now seek to invite others through the ministry of Beyond the Walls.  So what can philanthropy do to promote human communion?  Jeremy points us toward an article in First Things by David and Amber Lapp, from whom he borrowed the “communion” formulation.

As the Lapps note, “From the early Church to St. Vincent de Paul to Dorothy Day, Christians have always responded to poverty and class divisions with a deeply personal encounter.  This personal encounter is what Pope Francis proposes in his recent challenges to go out to ‘every street corner,’ to the margins of society.  He calls for ‘small daily acts of solidarity’ and advocates the ‘art of accompaniment.’” The Lapps specifically propose, among other things, subsidizing “solidarity organizers” who could live in and help mobilize low-income communities.

But as the story of Paul and Greg suggests, and as Bob Woodson has long taught, those organizers are already there, living and working quietly within those communities.  Within every low-income zip code in America, there are already grassroots groups established by those who are recovering, in order to be available to those in need of recovery.  Yet their gentle, open-hearted, patient witness, expressed through countless “small daily acts of solidarity,” remains invisible to donors who demand vigorous, short-term, tangible strides toward “changing the world.”

Paradoxically, our foundations need to drop their obsession with measurable effectiveness, in order to find the groups that are truly effective.  They are effective precisely because they are concerned less with effectiveness than with nurturing communion, less with reforming sinners than with breaking bread with them.

We can thank Jeremy Beer for his powerful explanation of this approach, and we can only hope that philanthropy takes notice.