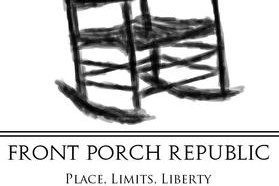 When FPR launched in 2009, we weren’t sure what to expect. We knew our culture, economy, and politics were broken, and believed that we would have some repairs in mind. Given what has been said at the level of presidential politics, we have failed. But other evidence suggests that in many ways our voice has been heard. Our themes of place, limits, liberty resonate in some quarters now more than ever. “Localism” has gone from being a fringe movement to being, in some ways, a centerpiece of American thinking. I’m not sure how much credit we can take for all that, but we can take some, at least.

We recently concluded our fifth annual conference, a highly successful gathering of souls in upstate New York. New members were brought on to the Porch as a result, and our platform got just a little larger. Plans are already underway for next year’s conference. Our imprint now boasts three volumes, with more on the way.

The key to the enterprise, of course, is this website. Readers who have been with us for years might have thought the site has gone stale. A look at the comments section may suffice as evidence. We’ve had no redesign, the persons involved in starting FPR haven’t been writing as much, and it hasn’t always been easy getting the high-quality sorts of essays our readers require. Part of this problem is  finances: FPR has always operated on a shoestring budget, largely run by the voluntary and uncompensated time of its editors. We try to pay writers until our funds run out, at which point it becomes difficult to solicit new content. But we keep plugging away.

Then too, these enterprises probably have a shelf life. In many ways, the key ideas of FPR have already been stated. New readers may not be able to find easily the essays that get to the essence of what we’re about, but those essays have already been written and rehashed. Nonetheless, the task of extending those ideas, enucleating their implications, and connecting them to social problems still remains. And to this task we remain committed.

So I am happy to announce that we are in the process of redesigning the website. Thanks to the generous donation of time and craftsmanship by one of our loyal readers, our new website is almost complete. It will in all likelihood be up and running by Thanksgiving. I’m confident our readers will be pleased with the new design. It’s much cleaner and easier to use. The font is more attractive, and essays will print more attractively. It reads better on mobile devices.

Most importantly, it will be more user friendly. We have fixed the search function. The layout is more intuitive. It will be easier to find particular essays by topic and author. The “Local Porches” function will actually be useful.

The conference, the redesign, and the imprint are all evidence to our ongoing conviction that the themes we discuss remain as vital as ever, and our commitment to defending the ideas of place, limits, and liberty in an increasingly mass and illiberal age. In this, we need the continued support of our readers: to keep reading, to offer helpful suggestions, to participate actively in the comments section, and – when possible – to consider an offer of financial support.