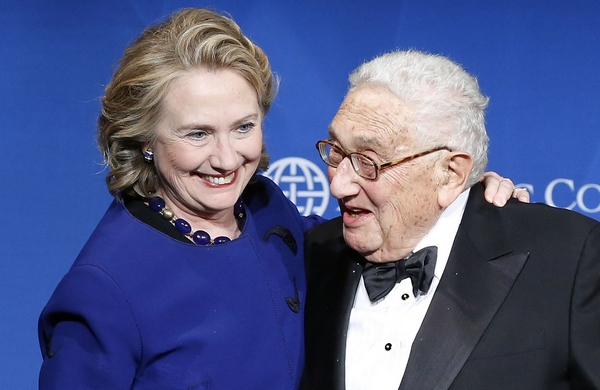 Sioux Center, Iowa.   In the Wisconsin debate last week between Hillary Clinton and Bernie Sanders, the anti-establishment candidate criticized the establishmentarian for her praise of Henry Kissinger, one of her predecessors at the State Department.  Why would a self-proclaimed progressive Democrat pay honor to a Republican who exemplified both gunboat diplomacy and dollar diplomacy under Presidents Nixon and Ford—a man who easily moved from Harvard professor into the Standard Oil (Exxon Mobil)-Chase Manhattan Bank orbit of the Rockefeller family?

True to form, Clinton would not give a straight answer.  She offered an evasion that did not address any of Sanders’ specific criticisms of Kissinger.  While Clinton castigated Sanders for daring to question the strength and quality of Barack Obama, she refused to utter even the mildest objection to anything ever done by Kissinger.

With its long tradition of opposition to plutocracy and imperialism, and its politically-active center of progressivism in Madison, the state of Wisconsin will be fertile ground for the Sanders candidacy.  The audience reaction to Sanders’ point was muted because DNC officials had stacked the audience with pro-Clinton folks.  Given the low level of historical knowledge among average political activists, it’s doubtful that many supporters of either candidate, in the hall or watching on television or the web, were familiar with Henry Kissinger.  Sanders might as well have referenced Philander Knox.

But the Wisconsin context was fitting.  Wisconsin is the state of Fighting Bob La Follette, who took on the Wall Street bankers and war profiteers of his day—Republican and Democrat alike.  Of Senator Bill Proxmire and Senator Russ Feingold (genuine Democratic mavericks).  Of historians William Appleman Williams and Merrill Jensen.  Of common-sense German and Scandinavian farmers and radical Madison students.

Consider the candidates who have won or done very well in the Wisconsin presidential primary in the past.  On the Democratic side, Missouri rabble rouser and League of Nations opponent James Reed won in 1928.  Tennessee maverick Estes Kefauver won in 1952 and 1956.  John Kennedy, son of an “isolationist” tycoon, beat welfare state and globaloney poster child Hubert Humphrey in 1960.  Redneck populist George Wallace produced a shock by attracting a third of the vote against an LBJ stand-in in 1964.  Anti-war candidate Eugene McCarthy beat LBJ in 1968.  The two anti-establishment Georges—McGovern on the Left and Wallace on the Right—dominated in 1972.  McGovern heir Gary Heart beat Humphrey heir Walter Mondale in 1984.  Late in the primary season, anti-globalization populist Jerry Brown nearly beat frontrunner Bill Clinton in 1992.  Clinton solidly won the more-crucial New York primary that day so it didn’t matter so much, but his wife may be concerned about Wisconsin this season.

Senator Robert La Follette (R-WI) is especially relevant.  La Follette won four straight GOP presidential primaries in his home state.  Running as a third-party candidate for president in 1924, he pledged, “Our State Department shall not be the agent of bankers, investors and imperialists.  Your sons shall not be conscripted as a collection agency of private debts. . . . We will end the partnership between our State Department and imperialistic interests, and we will divorce it from Standard Oil and international financiers.”  He denounced the Treaty of Versailles as “a treaty of financial imperialists, of exploiters, of bankers, of all monopolists, who sought through mandates to sanctify and make permanent a redistribution of the spoils of the world and to cement forever the stranglehold of the power of gold on the defenseless peoples of the earth.”  La Follette’s reference to Standard Oil—economic foundation of the Rockefeller family—foreshadowed Kissinger’s elevation to National Security Advisor and Secretary of State after serving as Nelson Rockefeller’s right-hand man and chief foreign policy advisor.

With her dependence on Wall Street, career of power-over-principle, and fondness for hawkish imperialism, Clinton has far more in common with Kissinger than with William Jennings Bryan, a Democratic predecessor as Secretary of State and a three-time presidential nominee.  Bryan was the first and last Secretary of State to resign as a matter of political principle.  He did so because he opposed President Wilson’s pushing of the nation into World War I, partly at the behest of J.P. Morgan & Co., which was invested in European governments and controlled industrial corporations that stood to make enormous money from war.  Bryan of Nebraska and La Follette of Wisconsin were friends and allies in the farmer-labor populist coalition of the Progressive Era.

A more recent manifestation of this Democratic tradition—which stretches from Bryan to Sanders—is Senator Harold Hughes (D-IA).  On September 21, 1973, Hughes voted against Kissinger’s confirmation as Secretary of State, saying that he had “a chilling, chessboard view of the world” and his philosophy was “inimical to the long range cause of world peace and inconsistent with the moral purpose of our nation.”  Hughes was on the losing side—Kissinger was easily approved by a vote of 78-7.  In this, as in his decision a couple years earlier to forgo a run for the presidency because his Christian pacifism would have prevented him from launching nuclear weapons against innocent civilians overseas, Harold Hughes showed that he was unwilling to lose his soul through political compromise.  Such a trade-off has apparently never tempered the ambition of Hillary Clinton.

Kissinger and Sanders are both prominent Jewish Americans.  If Sanders were to be nominated and elected, he would be a historic figure: the first Jewish president in American history.  Kissinger is indebted to Niccolò Machiavelli, the sixteenth-century Italian secularist.  The Machiavellian trinity of power, privilege, and profit is antithetical to the Hebraic tradition of the prophets.  Sanders is a secular Jew but is still channeling many of the ethical concerns of Yahweh, as expressed in the Hebrew scriptures.

A third Jewish American, Bob Dylan, disparaged the counterfeit philosophy of Henry Kissinger in his 1979 song “Gonna Change My Way of Thinking.”  Nearly 40 years later, Bernie Sanders, who shares with Dylan an interest in truth and justice, has publicly called attention to the same.  Wouldn’t it be refreshing to have a Democratic nominee who actually prefers democracy over oligarchy, and peace over war?  Someone in the Bryan-Hughes tradition?

Even if we dislike Sanders’ penchant for federal government programs and social liberalism, in several important ways he would provide a choice not an echo.  That would be good for democracy.

Coming to Ourselves in 2020