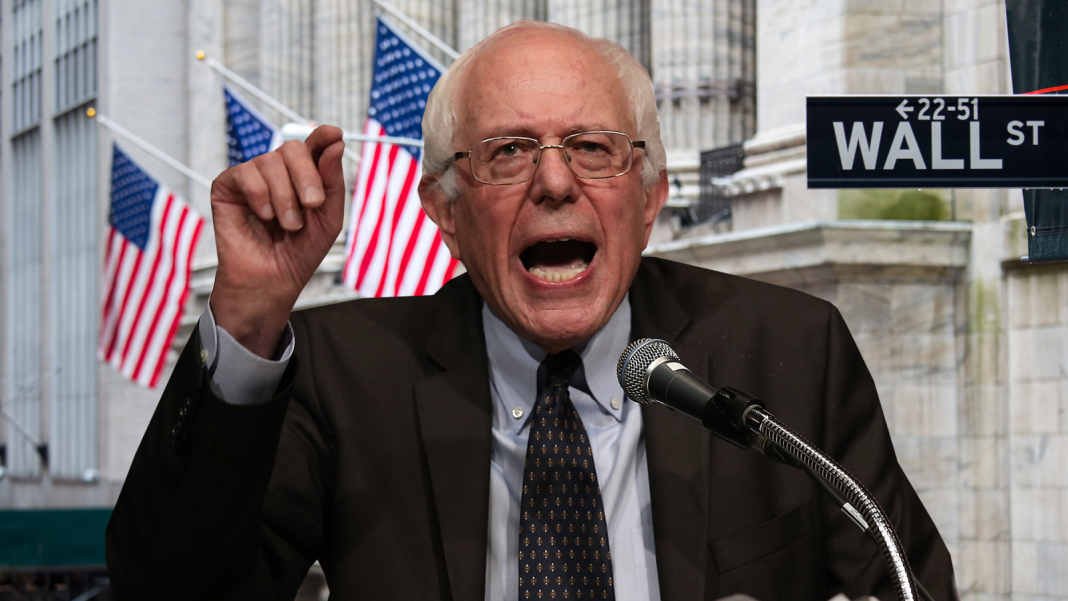 Over the weekend, a friend of mine shared an article which had joined in the Hillary Clinton-Bernie Sanders fight, a fight which may come to an end tomorrow in New Hampshire, but probably won’t. The title of the piece is “Bernie Sanders Doesn’t Know Diddly-Squat About Wall Street” (a claim which, from the author’s limited perspective, is undoubtedly true), and it acknowledges the truth of great many of the critiques of Wall Street’s behavior over the past decade which are being made by both the Clinton and Sanders camps. But the article’s overall critical aim is clear:

It is unconscionable that Wall Street’s compensation system continues to reward bankers, traders, and executives to take big risks with other people’s money in hopes of getting big year-end bonuses…But Sanders never talks about the compensation system on Wall Street. In fact, he rarely mentions anything concrete at all. Instead, he dwells on bizarre and nebulous notions such as imposing “a tax on Wall Street speculation”….The candidate’s website does not really flesh out the idea, other than to say that the tax “will reduce risky and unproductive high-speed trading and other forms of Wall Street speculation.” If one goes back to a bill that Sanders introduced in the Senate last May, there is slightly more meat on these bones; still, the proposed legislation seems to have very little to do with actually taxing “Wall Street speculation” and more to do with taxing every trading transaction–the buying and selling of stocks and bonds and derivatives–that Wall Street and hedge funds engage in. This, of course, makes no sense whatsoever–why tax the very behavior the system depends upon?

In other words, there are clearly bad actors on Wall Street, so why on earth would someone want to burden the whole system of Wall Street, as opposed to doing something to simply target those bad actors? The idea that Wall Street itself–or at least the high-end, high-speed, huge-money, over–financialized skewing of it over the past few decades–might be the problem here simply never crosses the author’s mind.

Let me expand on this somewhat discomforting point a little–discomforting because honest populists and socialists (and Sanders, though a career politician, is at least a little more honest than most) know that we are all far more affected by Wall Street practices than we’d like to admit. Indeed, we are all so affected by (and implicated in, and dependent upon) it that excavating the actual moral ideal at work in nearly all actually populist and socialist–as opposed to liberal egalitarian and redistributive–ideas is difficult, even though almost anyone who really thinks about it knows the point is there. Our profound inarticulateness over this point is owed, I think, to the fact that most modern leftism is bereft of the moral language which once animated anti-capitalist arguments generally, and thus those who advocate it–as Sanders does, however inconsistently–find it difficult to say what, on some deep and inchoate level, they clearly want to say. It is a point that, to their perverse credit, clear-eyed libertarian, propertarian, and other Lockean thinkers often recognize and put at the front in their attacks on actually socialistic ideas; some of them really delight in mocking their opponents for it, and those opponents fulminate usually rather hopelessly, because they believe in what they’re saying but they’re not entirely sure just what they’re saying actually means.

What point am I getting at here? To be curt, it’s simply this: “why tax the very behavior the system depends upon,” you ask? Easy. Because us populists and leftists and other vaguely socialistic types actually don’t like the system we’re all affected by, dependent upon, and implicated in, and consequently want it to do less of what it does. A financial transaction tax may have a variety of revenue-raising and redistributive pluses and minuses, but from a genuine populist/socialist perspective its greatest effect will probably be to simply make it at least slightly less likely that something we don’t like will be done. Both populism and socialism (and local traditionalism or distributism or what-have-you) can refer to a huge range of economic possibilities, but in the post-WWII, post-Cold War, globalized world, they both–whether their proponents realize it or not–basically mean the same thing: the elite generation and manipulation and moving around financial wealth has gone far enough. There ought to be less of it.

What would it mean for the Wall Street system (or, again, mainly the one which has emerged over the past generation or so) itself to see less activity? For taking on risk and collaterizing debt themselves to be seen as a less attractive means of generating capital? Well, as the article correctly points out, it would mean less absolute wealth would be generated overall (but that would also mean less inequality). It would mean investment would be less incentivized (but so would less ruinous speculation). It would mean less capital mobility (but that would also mean less community disruption). Thoughtful and compassionate liberals of all sorts, if they can be led to see clearly what exactly is being argued about here (which is not easily done), are rightly bemused or even infuriated by this idea: I mean, if you can tame the system so as to retain its advantages and generate enough surplus to pay for social programs that ameliorate its structural harms, why on earth would you want to do something that actually burdens the system itself? From Keynes to Krugman (though, to be fair, Krugman was once more willing to give a financial transaction tax some consideration) all these smart folk just look at the socialists, populists, and localists, confused and weirded out by such proposals. And since the language of sustainability and labor and community and other collective moral goods has mostly been in the ash heap for the past century, responding in any way which is actually comprehensible isn’t very easy.

That lack of comprehension is a function of our times, of course. A century ago, the moral and communitarian–that is, the conservative (or as I prefer to call it, the “left conservative“–case against socially disruptive, collectively disempowering, but admittedly damn productive capitalist growth was pretty obvious, though by no means broadly accepted. William Jennings Bryan, the most nationally prominent spokesperson for this kind of more democratic, less banker and investor-friendly, more producer-oriented (and thus, inevitably, more localist and agrarian than urban and industrialist) vision of market economics, ran for the presidency–and lost–three times. The parallels between Bryan and Sanders are interesting, to say the least–among others, you can see in the complicated squabbles over whether Sanders counts as a “real” socialist the same sort of disputes over whether Bryan, in accepting the Democratic party’s nomination in 1896, was selling out the Populist cause. And, of course, there’s the argument that if Sanders actually manages the ridiculously unlikely feat of snatching the nomination away from Clinton, that he’d both be soundly defeated and will have forced class-conscious real changes into the Democratic party, as Bryan’s nomination in 1896 (and 1900, and 1908), helped make it possible for progressives like Woodrow Wilson and Franklin Delano Roosevelt to win the party’s support later on. But mostly, I think, those similarities are overshadowed by a major difference: Bryan, and all sorts of other populists and socialists (and even some actual traditionalists) a century ago, could recognize that certain types of, and certain amounts of, capitalist growth were just socially bad, however many individuals such transactions may financially reward. Bad because they create inequality and division; bad because they encourage radical individualism and cultural fragmentation; bad because, well, to be frank, the whole Christian tradition has mostly opposed them. And while Sanders has shown himself more than capable of quoting scripture and popes when it suits him, he lacks the civil religion substance that could give the form of his anti-capitalist democratic socialism some real, populist, moral weight.

None of which is relevant to the author of the article in question, because there’s no indication that he’s cognizant of these questions of morality, community, and sustainability either. And let’s give Sanders some credit: if you actually believe (as I do) that our market economy ought to be informed by, and even regulated by, greater collective concerns and democratic controls and moral limits than contemporary capitalism tolerates, than Sanders anti-Wall Street talk at least partakes of the shape of the reforms we need. And at the level of the presidency–or, more realistically, at the level of the kind of highly symbolic exchanges over political possibilities which a presidential nomination contest makes possible–being able to get clear on just what the (admittedly somewhat discomforting) point and the shape of one’s differing economic visions are is no small blessing at all.