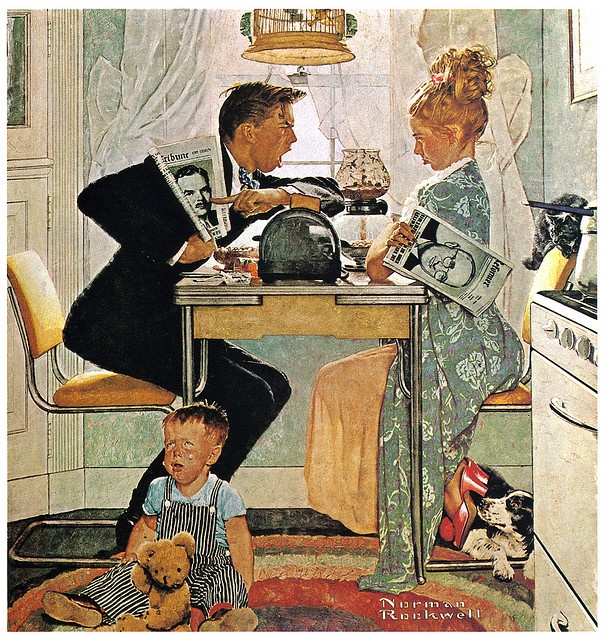 With the exception of one big think piece on our almost-certainly-soon-to-be-POTUS, Hillary Clinton, I’ve been quiet this presidential election. I think that’s because, in the midst of all the outrageousness and gutter talk, all the hysteria and invective, all the anger and angst, I usually haven’t felt particularly worried. That feeling of reflective calm has increased over the past week or so–it’s not that I feel good about what tomorrow will bring, but I’m not particularly anxious about it. Here’s why, I think.

1) I’ve never really been convinced by any of the downright-apocalyptic talk we’ve seen this election. Not that I haven’t worried about it; ramping up political disagreements to the point where both sides see the other as a world-historical threat to one’s life, freedom, family, faith, future, and civilization itself simply isn’t healthy; it makes respectful disagreement, and really any kind of civil discourse that much harder to maintain. But that’s the sort of civic unhealthiness we’ve unfortunately had to endure for a couple of decades now. I can recall (as can many of you) the furious invocations of moral Armageddon from Newt Gingrich and the First Things crowd during Bill Clinton’s sordid–but for all that, not too shabby–eight years in office; I can also recall the shoe being on the other foot, and many of my fellow leftists and liberals talking about how George W. Bush’s re-election was nothing less than the end of the republic and the beginnings of an imperialist theocracy (which I guess didn’t take, somehow). It is now routine for folks on the left to believe that the white Evangelical Protestant minority in our nation wants nothing more than to round up all the Mexicans, Muslims, and gays in America, and force them all into internment camps, and for folks on the right to believe that the college-educated agnostic minority in our nation wants nothing more than to round up all home-schooled children in America, and subject them to sex change operations. I’m sorry, my friends, but that’s nonsense, all of it. The government of the United States of America is suffering from several slow-motion catastrophes, in the form of congressional dysfunction, party insularity and corruption, executive overreach, meritocracy-driven divisiveness, and an addiction to kludgey work-around solutions that have little democratic legitimacy and even less rational sense. Neither Clinton nor Trump are the climax of these many bad developments; they’re both symptoms, that’s all.

2) Which isn’t, by the way, some milquetoast, High Broderistic sigh about how “both sides do it.” They both do, of course, but the burden of the incivility and anti-democratic fury this year is absolutely on the Trump side. Clinton may well be–even when one tries to be as sympathetic as possible to her record and point of view as possible–an unimaginative, unethical, condescending creature of an elite, statist, progressive political machine, but she’s at least serious and predictable, and at least appears to genuinely respect the institutions she wishes to direct toward what she conceives as the public good, while Trump is none of the above, and apparently has no sense of what would be good for the public whatsoever, and probably wouldn’t have any interest in achieving such good ends even if he did. Hence the paranoia from so many of my friends about the polls: America’s about to elect a sexist, ignorant bully and a hot-tempered Know-Nothing to the presidency! That paranoia is also misplaced; we’re not. Sure, data can be read wildly wrong (just ask the Bright Young Things surrounding Romney in 2012, for example), but in all honesty, even if the FBI had indicted Clinton in for something having to do with her endlessly hapless e-mail behavior, as opposed to just letting her off with a warning, she still would be a favorite tomorrow, because being part of the Establishment means, well, knowing how to campaign, which is something Trump clearly never thought he needed to learn. 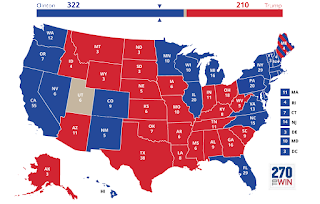 (Yes, the likelihood that Utah will break the half-century dominance of the Electoral College by Republicans and Democrats by giving their vote to Evan McMullin is looking increasingly tiny; still, electoral geekiness and Mormon hope springs eternal. In the end, I think Clinton will end up with an even greater popular vote majority than Obama ever did, and totaling up the EV count tomorrow night, after North Carolina and Florida both go for Clinton–though admittedly, that latter may take a while to be sure about–will be just be a simply matter of running up the numbers.)

4) How will I vote? Writing in Bernie Sanders, I suppose. I’m too fond of my particular mix of republicanism-localism-populism-socialism to symbolically embrace with my single vote a dynastic representative of a liberal establishment which I happen to think gets many policies right, but achieves them in ways mostly wrong. Besides, the only pro-Clinton argument that I’ve heard which actually reaches past the Electoral College all the way into Trump territory here in south-central Kansas is one that insists Clinton needs a huge popular vote majority to repudiate “Trumpism.” But that assumes I see everything about Trumpism as worthy of repudiation–and I don’t.

5) Trump was a bad populist, in every sense of the word–but he did become, in his own self-indulgent, irresponsible, probably-never-really-actually-intended way, a voice for anti-financial globalism and anti-bureaucratic elitism, and thus a voice for community empowerment. His attacks on trade agreements and immigration policy were often racist, usually ignorant, and overall both toxic and demagogic–but at least he made those attacks. If it wasn’t for Trump, the Republican party wouldn’t be what it is today: a party trapped in a much-needed death-struggle over how technology, global capitalism, resource depletion, social and economic inequality, and demographic change are changing what we mean by community and the common good. I would have far preferred that death-struggle take place on the Democratic side, through the Sanders presidential candidacy, because then the possible bad results (and there are always possible bad results) wouldn’t nearly as frightening. But you always need to look for silver linings, and so while the results of Clinton’s election to the presidency and the Republican party’s civil war are unlikely to present anything like what this nation needs, and risks exacerbating a few of our multiple slow-moving catastrophes even further, they are, on the whole, at least slightly better than most of the actually politically viable alternatives.

6) What does the nation need? Well, Charles Marohn has put it well: “We will have a strong and prosperous nation only when we have strong cities, towns, and neighborhoods. That kind of prosperity cannot be imposed or engineered from the top; it must be built slowly from the ground up. Scale our economy to those working at the ground level and we will see a true prosperity emerge from the fear and acrimony that is our national dialog.” Which means, far more than the presidency, what I’m watching tomorrow is our state legislative and county commission races here in Kansas: because those are the people I, and everyone else involved in local politics, in citizen initiatives, in fights over food trucks and bike paths and school funding and all the rest, will need on our side, or at least will need to understand better when we oppose them. Is it arguable that Trump or Clinton might be a better prospect for local engagement? Perhaps. But neither president can do anything for thatching together our socio-economic fragments if there aren’t citizens connecting with one another, organizing and fighting and celebrating together, in their still-existent communities, on behalf of such a rebuilding project. The localist alternative to federal decline will exist whomever wins tomorrow; while I’m happy about my prediction, I’m even happier–or at least even more unworried–knowing that there will be people whom I can meet with and work with locally, tomorrow and next week and next month and next year, regardless of what happens in the meantime.