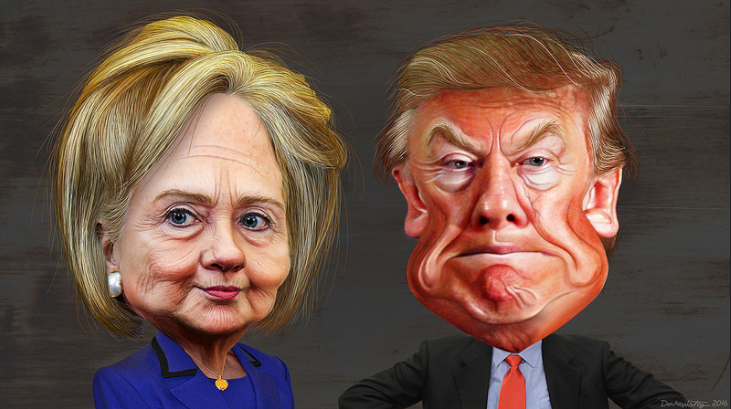 After the second, town hall-styled presidential debate pundits raved, and perhaps rightly so, about Hilary Clinton’s ability to handle the format. The former first lady received high rankings from observers on her ability to field questions, recall names, and establish eye contact. Madame Secretary of State was widely praised for making a “connection” with voters, and lauded for wandering away from her stool/lectern to stand before her constituents, asking them questions about their lives.

Donald Trump, by contrast, looked uncomfortable, looming over Clinton in moments of extreme awkwardness richly-parodied on Saturday Night Live. He performed the role of the distant ideologue (read: pedagogue) to near perfection, relaying his talking points (lecture notes) in a solipsistic vacuum, unaware of his audience and unable or unwilling to adjust to their individual needs. That night and the following morning, the press raved about Clinton’s depth of study while criticizing Trump’s woeful attempts at preparation as bombastic, unrehearsed, slipshod, and short on facts. And yet, for all the stylistic differences between them, post-debate fact-checking revealed that both candidates stretched the truth with something approaching parity.

As a senior professor with nearly twenty years of teaching experience in college classrooms, I am struck by how closely the language used to rate the candidates’ respective debate performances mirrors the vernacular of teacher evaluations in higher education. Perceptions of candidate effectiveness in this much ballyhooed election season seem increasingly to boil down to their comfortability, or lack thereof, in the role of professor-in-chief, as well as to changing generational perceptions of what makes a good professor/teacher in the twenty-first century.

In Trump we see the uncomfortable, even cringe-worthy, Professor of the Past—white, often male, uncomfortable with connecting emotionally to, or emoting with, his younger charges. The stiff suit, the outsized reputation, the ad nauseam bullet points reconstituted from notes and observations made before his students were born—all conform to the professorial stereotype of yore. These men and women knew their material (or so it seemed to us as eighteen-year-olds) but I, for one, recall some of my own as truly awkward and afraid of the spontaneous, deeply afeared of making themselves vulnerable before their constituencies, and tragically unconcerned with matters of style as evidenced by a litany of what seemed back then to be true faux pas—ranging from bad hair to bad breath to bad Velcro shoes—that disqualified them as objects of esteem in my eighteen-year-old brain.

By contrast, and no matter how over-studied or insincere her method, in Clinton we see the Professor of the Now—more likely to be female (The percentage of faculty in art history, English, foreign language, linguistics, and communication is now well over 50%) highly interactive, skilled in interpersonal communication, unafraid to connect. The Professor of the Now trades in affirmative nods, an admirable recall of statistics, and listening-friendly sorties into the audience of the kind Elizabeth Dole made famous, cementing the hoped-for bond.

The contrarian in me, though, wonders how often these days, in arriving at our assessment of “good” and “bad” teachers and “good” and “bad” candidates, we willingly conflate style with substance. Sometimes, in observing gifted younger male and female colleagues in classrooms and lecture halls across the nation I see a kind of teacher-student “connection” that looks and feels more like watching children’s programming on PBS than rigorous, substantive education for adults entering a tough, unsentimental, and rapidly changing job market. I witness the wide eyes, exaggerated body movements, and hyperbolic pitch modulation that strike me as more reminiscent of the we talk to infants and toddlers than to mature adults needing a good job to pay off their mounting student loans. I see the studied (and yet strangely normed and normative) methods of the network television broadcaster supplanting, or coopting or otherwise virally spirit-possessing the methods of the educator. This is not to say that the two vocations are mutually exclusive (a network television broadcaster is an educator of a sort) but that the audience expectations for these two once-distinct professions seems to be coalescing in Screen Nation, such that it’s not at all difficult to imagine that Anderson Cooper would be rated as a highly effective teacher in today’s universities, whereas Trump would not be. Cooper is seen as approachable; Trump, scary, and where our hot/cold Google-era assessments are concerned, scary and hard must equal bad; meanwhile “laid back” and “easy-going” is seen as a universal “good.” Perhaps academe’s recent eagerness to welcome ex TV personalities, broadcasters, and politicians into their faculty ranks further evidences this same fusion and confusion.

The follow-the-bouncing-ball brand of PBS children’s programming-styled education may register as effective in teaching evaluations, but I worry that mistaking it for good teaching risks infantilizing our classrooms. In a world of continuous ratings, isn’t every numerical professor evaluation a tabulated vote, and each prof a candidate (sometimes literally for tenure or promotion) with a constituency they feel the need to please? Moreover, what are Millennial voters, and students, conditioned to want in a leader—of a classroom or the entire Free World? If the election of 2016 is any litmus test, the data (Millenials favor Clinton over Trump 2 to 1, according to the Washington Post) suggest college-aged voters prefer contrived and studied approachability over genuine awkwardness, interactivity over professional distance, and hyper communicativeness over leaders-of-few-words laconicism. That’s all well and good, but I argue, politics aside, that such descriptors belong more under the heading of style than of substance.
Perhaps the “lovable” and “cute” red-sweatered questioner of that second, townhall-styled debate—the teddy bear of a man who became an overnight Internet darling—offers further testament. Many of us have since forgotten the substance of Ken Bone’s question, though we remember him as nice and cuddly and almost irresistibly sweet. I assume we would rate him more highly as a communicator than Trump simply because we want to take him home and feed him some warm soup—in short, make an emotional connection with him. Incidentally the man since called “the human embodiment of a hug” has been richly rewarded for his embodiment of a more “correct” and contemporary classroom personae, having been offered a reported $100,000 by CamSoda for a reprise of his appealing and adorable softness of style (Bone admitted to Jimmy Kimmel that he had originally planned to wear a formal suit to the debate). In short, “the guy in the red sweater” now stands, agreeable softie that he is, to make more from his soft-spoken 22 seconds of fame than some tenured professors will make in a couple of years of in-the-trenches teaching.

In the end, I don’t care a lick whether the voice of my professor-in-chief is pleasingly soft or brashly harsh; I don’t care whether they rock a business suit or a pants suit or a Mao suit or a zoot suit. I don’t care how wide or narrow their eyes are when they speak, whether they communicate in soft and comforting tones, or whether they’ve had a spray-on orange tan or extensive plastic surgery. I don’t even necessarily care whether, pro-forma, they ask me about me. I like to think I’ve transcended (at least a little bit) the eighteen-year-old me.

And when it comes right down to it, I care less about my future professor-in-chief’s avowed identity politics than the authenticity of their life experience and resulting depth of humanity. In other words, I choose not to reward with my vote a professor-in-chief who panders to me with a follow-the-bouncing-ball brand of education; I refuse to return to them high ratings for being a “laid back” and “easy-going” parent who treats me like a child under the guise of “emotional connection.” I don’t need or desire a Blue’s Clues professor-president in the White House any more than I need or desire a politically incorrect yet impossibly rich and out-of-touch magnate of industry in the university office or the Oval Office. Sadly, I do know which of the two extremes, all other things being equal, would likely garner higher evaluations; I know (or think I know) which one would be more likely to make tenure.

The truth is, I’m not the kind to rate Hillary Clinton’s wide-eyed and studied attempt at connectivity any higher than Donald Trumps narrow-eyed improvisational bloviation. As an observer of the “classroom personas” of our would-be “professors-in-chief” both strike me as self-serving artifacts of an insincere and ultimately ineffective teaching style; both are performative extremes to be looked past, if not seen though.

Zachary Michael Jack is an associate professor of English at North Central College in Naperville, Illinois, where he teaches in the undergraduate and graduate Writing and Leadership programs. A teacher of writing for social change, among other courses, his most recent book is March of the Suffragettes: Rosalie Gardiner Jones and the March for Voting Rights.

The Art of the Deal, and the Writing on the Wall