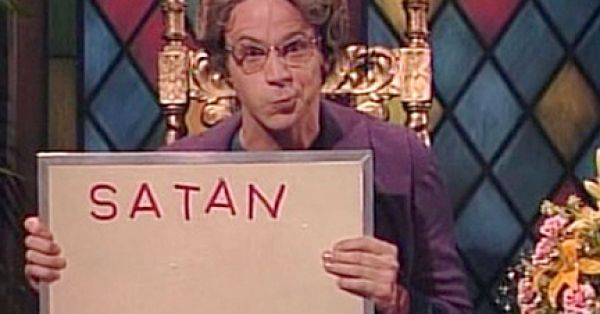 There’s no telling what the Environmental Destruction Agency will do under its new leader, Scott Pruitt, who appears to be playing Moloch to Trump’s Satan. But it looks as if Nature, for all her gentleness, kindness, and resilience, is in for a real ass-whoopin’.

The good news is that the ass-whoopin’ will be a temporary one. Nature, not Trump and Pruitt, will have the last laugh. If you look closely you can see Her smiling at them—in the manner, I imagine, of Milton’s God smiling at the satanic rebellion—and soon enough Nature, God-like, will laugh these rebels to scorn.

For, like the rebels, they are preparing their own ass-whoopin’. Soon enough they’ll wake up on a lake of fire, the “hoax” of climate change still on their ever-dissembling lips.

Who will play Abdiel to these fiends? Who will stand for the order of things? Who will remind these renegades that Nature pardons no mistakes?

Let this noble Abdiel start by saying that, although there’s no telling what the EDA will do under Mr. Pruitt, there is something the rest of us can do: stop applying the epithet “conservative” to people who don’t conserve anything and to policies that don’t protect anyone.

Mr. Pruitt is no conservative, and he apparently has no intention of protecting the very things his own life depends upon: clean air, clean water, temperate seasons, and healthy soils in abundant and abiding supplies. More baffling than this is that people to the right of him, afraid that he won’t go far enough to completely bugger these necessities, are mad enough to call themselves “conservatives.” More baffling still is that members of the media, who like to congratulate themselves on how smart they are, are mad enough to call all of these profligates “conservatives.”

Pruitt and Trump are nothing of the sort. Not a one of their fallen league is a conservative. They’re all wastrels and prodigals and renegades. Like Satan they complain of injured merit; they think themselves impaired. Like Moloch their sentence is for open war. But tell me: what are they conserving?

To be a conservative you must conserve things. And to do that you must restrain passions. I realize that this sounds like Kirk’s ninth principle, but Nature doesn’t give a damn what it sounds like. Nature expects men to behave like men, not like angels or beasts.

But there’s a lesson to be had here, a political and a semantic lesson. If you do conserve things, you are not only a conservative. You are also a liberal in the good sense of that highly-fraught word, for you have acted liberally—that is, generously—toward those who come after you. You have left them something. You’re a liberal whose conservative cred has just risen, probably to your embarrassment, but that’s what you are. And, again, Nature doesn’t give a damn about your blushing.

Nor does the Order of Things give a damn that you’re in danger of becoming a good person not easily pigeon-holed. Journalists won’t know whether to assign you to a “red” or to a “blue” state, it is true, but all that means is that you might soon be capable of a kind of nuance that those who think there are only two kinds of states and only two colors are not capable of.

I mean journalists, certainly, but academics as well. And I think this means you are to be congratulated. You’ve out-nuanced the elites.

But in your moment of congratulation make no mistake. Mr. Pruitt & Co. have no intention of conserving anything for their grandchildren. That’s the perfidy they’re capable of and are now powerful enough to sanction, perform, and perpetrate.

Certified liberals, meanwhile, continue inexplicably to call them “conservatives” while at the same time complaining that Pruitt & Co. won’t conserve anything.

What liberals actually are at this moment of complaint, or what they want to be, is conservatives. They want clean air, clean water, good soil, and salubrious seasons. But they can’t tolerate the thought that they might actually be conservatives, because that would mean, by their own logic, and in accordance with their own historical pronouncements, that they’re dumb shits. What would the journalists and the academics think if they found out that their fellow liberals are dumb shits?

Don’t get me wrong. I’m in no mood to speak well of journalists and academics. I’m not sure in whose presence I’m more likely to open a vein and slip into a warm bath. What I mean to do at the moment is to say that the words “conservative” and “liberal” as currently used are meaningless. Speak of Right and Left if you must, but don’t destroy two otherwise useful words that might provide nuance to people from whom nuance has apparently taken its leave.

I’ve spent the last three decades or so paying attention to what we now call “environmental” issues. I don’t happen to like the term “environmental,” but whatever. It remains the case that we can’t go on destroying the sources that sustain us. We must be liberal (that is, generous) toward them and toward our posterity, which means, in so being, we must conserve those sources. I write that sentence, which uses the words “liberal” and “conserve,” assuming that these words should be allowed to signify as they might among saner people than we have proven to be.

Another of Kirk’s principles—his sixth—is that we should be chastened by our imperfectability. Are the people called “conservatives” chastened by this? Hardly. Not any more than are the people called “liberals.” Find me a frat boy who’s taken a vow of chastity, and I’ll find you the “conservative” and “liberal” who are chastened by their true condition. Let them both burn on the lake of fire until they have understood the meanings of the words by which they have been defined—especially the word “imperfectable.” “Fallen” will also do.