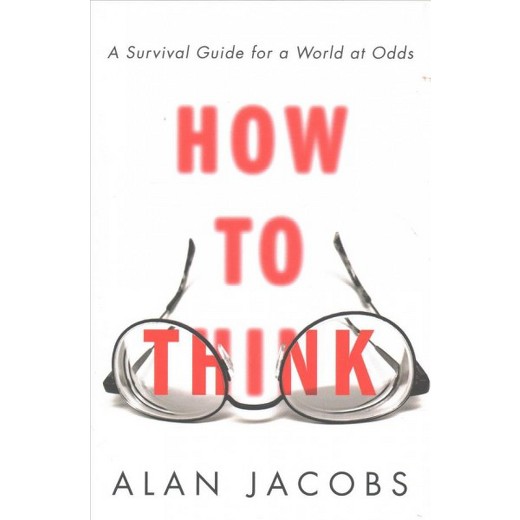 Last fall Alan Jacobs published a slim book with a bold title: How to Think: A Survival Guide for a World at Odds. Jacobs is a professor of English literature, but in this book he joins a growing chorus of social psychologists who warn that enlightenment anthropology—what Jamie Smith memorably calls the “brains-on-a-stick” model of human persons—falls woefully short of reality. Rather, as people like Daniel Kahneman and Jonathan Haidt have shown, our bodies—our senses, emotions, and intuitions—shape and direct our reasoning.

Rather than trying to suppress the embodied aspects of reasoning—an effort that Jacobs thinks is futile and, indeed, counterproductive—Jacobs argues we should learn to use our emotions and intuitions to help us think better. In particular, I found his reflections on how we should think with others to be salutary. As he points out, we can’t think for ourselves—inspirational posters to the contrary—so we should learn how to think well with others.

One of the chief dangers of thinking with others is that we find it easier to think with people who think pretty much like we do. It can be threatening to encounter people who think differently from us. Drawing on the work of anthropologist Susan Friend Harding, Jacobs relies on the term “Repugnant Cultural Other” to describe how we tend to think against certain groups that our tribe considers to be odious.

Significantly, such groups are usually comprised of people who live relatively nearby. We’re not bothered by people in distant countries who hold odd views; they are merely interesting. We’re repulsed by our weird neighbor who votes for candidates we think are objectively stupid or dangerous. Jacobs cites Scott Alexender’s reflections on this theme:

We think of groups close to us in Near Mode, judging them on their merits as useful allies or dangerous enemies. We think of more distant groups in Far Mode—usually, we exoticize them. Sometimes it’s positive exoticization of the Noble Savage variety (understood so broadly that our treatment of Tibetans counts as an example of the trope). Other times it’s negative exoticization, treating them as cartoonish stereotypes of evil who are more funny or fascinating than repulsive. Take Genghis Khan—objectively he was one of the most evil people of all time, killing millions of victims, but since we think of him in Far Mode he becomes fascinating or even perversely admirable—“wow, that was one impressively bloodthirsty warlord.”

As Jacobs’s concludes, “The real outgroup, for us, is the person next door.”

Another phenomenon that exacerbates our tendency to view our neighbors as Repugnant Cultural Others is the disinhibition effect that communication technologies can have. Jacobs quotes some of the obscene, violent language that Thomas More and Martin Luther used in their vituperative exchanges. They manage to make Donald Trump’s tweets look like a model of restraint and propriety. As Jacobs notes, these exchanges were shaped by new technologies: “The violence of the language is partly explained by the disinhibition generated by a new set of technologies, chief among them the printing press and postal delivery, which enabled people who have never met and are unlikely ever to meet to converse with—or in this case scream at—one another.” Digital communication technologies amplify this disinhibition effect; it’s incredibly easy to mock and insult people we will never meet: “As long as someone remains to you merely ‘the other,’ the [“Repugnant Cultural Other”], accessible through technology but not truly present to you in full humanness,” then it remains easier to fling insults and take-downs at them rather than to reason thoughtfully and charitably with them.

This is where being more deliberate about thinking from a particular, physical place can be a vital corrective to our technologically-enabled modes of debate. If we are friends, or at least casual acquaintances, with particular, embodied people, it’s at least possible that we will learn to think alongside them. And if we’re deliberate about befriending people in our broader communities, we’ll get to know people who also happen to belong to sociological groups that my tribe tells me to label as repugnant. The embodied conversations such friendships make possible bring necessary inhibitions; we’re less likely to yell at someone standing next to us than we are to type a sarcastic, all caps comment at an avatar. To be clear, embodiment does not magically guarantee congeniality; humans are certainly capable of being vicious despite the inhibitions that embodied presence imposes. But embodied relationships with particular neighbors makes it more likely that we’ll engage others as human persons rather than digital avatars.

Maybe the most important “technology” for helping us think, then, is friendship.

Maybe the most important “technology” for helping us think, then, is friendship. Thinking alongside people whom we disagree with and yet still care about trains our feelings and dispositions. We learn how to reason and converse as modes of membership rather than warfare. As Jacobs puts it,

I’m reminded of Wendell Berry’s recent essays and stories expressing gratitude for the many friends who have been his conversation partners over the decades. While Berry certainly has local friends, he has also sustained important friendships through letters and the telephone. If we’re guided by practices and virtues cultivated via in-person friendships, we’re better formed to use communication technologies “to think with the best people,” as Jacobs puts it. Jacobs’s book has challenged me to be more deliberate regarding whom I’m thinking with, to ask myself whether I am indeed thinking with people who have good dispositions—who want to think well—and who think from different backgrounds and perspectives.