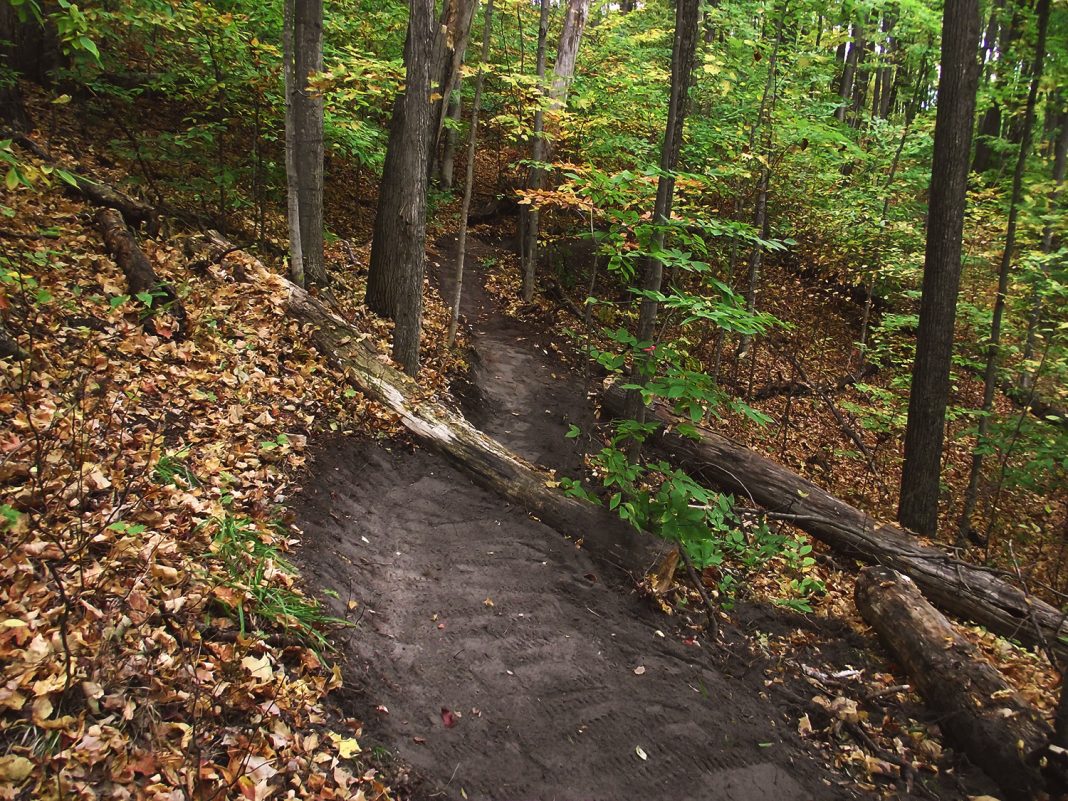 Later today, in my capacity as a twenty-first-century man whose duties include producing noise and air pollution, I will ride the boys’ dirt bike down this trail, hoping in the dangerous thrill of speed and abandon that the chain holds and I don’t get stranded.

I don’t like the nature-consumers who use this otherwise quiet place for zooming over and who think that the world is best seen at mechanical speed, but today I will make an attempt to understand them, rather like the novelist who convinces himself that he simply must commit adultery if he’s going write credibly about its own peculiar dangers and thrills and abandon—and maybe, if he’s man enough, its relentless and crushing regret.

But just now, in my capacity as a nineteenth-century man—a student, say, on his obligatory walking tour of the Alps—I see the world at human speed and I send little more into the morning air than the fine aroma of cigar smoke, a scent as proper to the place as the dewy ferns and the white pines and the red oaks and the sandy forest floor bestrewn with leaves and needles and all the creatures innumerable that crawl across it, including one solitary man and that companionable form of rolled Ecuadorian Sumatra burning slowly at one end. Nature is more fully itself with man and his artifacts in it, if the artifacts be good.

“How long does this walk take?” I have sometimes been asked on those rare occasions when I’ve made the mistake of allowing someone else to join me.

I have walked eastward into the low and blinding sun and thought, again, an old thought: what a fine thing it is to walk in the morning, alone, into the low and blinding sun. A few memorable lines have risen unbidden to the surface of thought and then, drifting off, made room for others. “All things that love the sun are out of doors; / The sky rejoices in the morning’s birth.” And at least once I have had to stop and be still and steady myself to keep from reeling to the ground at the force of a sudden awareness, the awareness that consciousness is an immense gift, wholly unmerited, a blessing without compare, like

truths that wake,
To perish never;
Which neither listlessness, nor mad endeavour,
Nor Man nor Boy,
Nor all that is at enmity with joy,
Can utterly abolish or destroy!

But now I turn onto another path and head west, the morning sun at my back, and walk toward a summit that will afford me a view of the valley that lies to the north. You reach the summit at some expense of body. The loose sand renders an austere climb difficult, but what you miss out on by not making the climb is too great a loss on such a morning as this. Little there is in life to compare with setting your face like a flint toward the north atop a hill from which the north country opens up.

And here the “more or less” of time impinges: if you linger long enough you will outlast the Ecuadorian Sumatra, and on this newborn day I have lingered a good long while, looking, thinking, watching my thoughts rise unbidden to the surface and then drift off. With the miraculous low-beams of sight I’ve swept the sandy palimpsest I stand on. That others know the place is certain: a beer can, a prophylactic wrapper, the black remains of a small campfire. Let the flesh know its pleasures, be they lawful. Below me I hear a doe blow a warning to her fawn and then, by moving slightly, I catch sight of her, bright and orange and wary. She and her fawn waste little time—“as if you could kill time without injuring eternity,” I think—and off they go, white flags raised behind them.

Turning to the west was my first intimation today that nothing gold can stay; the second is this uneasy descent from the hill, which, if the hill had a name, could be put to use by an eighteenth-century man in service of that century’s chief export, the topographical poem, sometimes called the “local poem” or “loco-descriptive poem.” There’s “Cooper’s Hill” and “Grongar Hill” and a hundred others all the way down to “Fern Hill” and the poet whom time held, green and dying, and who sang in his chains like the sea—as if to validate the axiom of seventeenth-century man: that “Grief brought to numbers cannot be so fierce, / For he tames it that fetters it in verse.”

Or maybe the hill is there to take me back another century still and “shewe vs therby the way to heauen, whiche before was austere and difficult.” Not to think this, not to suffer thought itself to rise unbidden to the surface, would be to break another kind of chain and hazard a greater calamity than being stranded down a trail with a dirt bike that can’t transmit power from the howling engine to the clamorous sprocket on the drive wheel.

And thus the gift of consciousness tethers itself to the stake of its own peculiar burden. The gift is precious, to be sure. But, as the one whose name was writ on water said, to think is to be full of sorrow. And

as it sometimes chanceth, from the might
Of joys in minds that can no further go,
As high as we have mounted in delight
In our dejection do we sink as low.

What remains of the walk after reaching the foot of the hill is not quite a half-mile of gravel road and maybe a dog or two to come out and tell this twenty-first-century man he’d better think twice about trespassing.

Today, like tomorrow, has troubles all its own. But il Penseroso will have his l’Allegro. For work, if it is good work, has its pleasures, and it is a modest demand, said a poet of the previous century, that labor partake of happiness. So back at the fishing camp I’ll drain the water heater and replace both thermostats and both heating elements. I’ve learned that you need an inch-and-a-half socket to do the job properly. Who owns an inch-and-a-half socket? But, having borrowed one, I can offer some assurance that those who come after me will be able do their cleaning in warm water rather than cold.

And then, like the philandering novelist in pursuit of credibility, I’ll straddle a dirt bike made for smaller people and head east on this same trail, the sun no longer before me, until at length, though certainly not for the duration of a cigar, I’ll turn west again and risk missing my star for having followed the wrong god home—because, said another poet of the previous century, a pattern that others made prevails in the world, a pattern that would have us see this very same world at mechanical speed and—leaf having subsided to leaf— know what it feels like to be smaller men than we are.

In Praise of Gossip