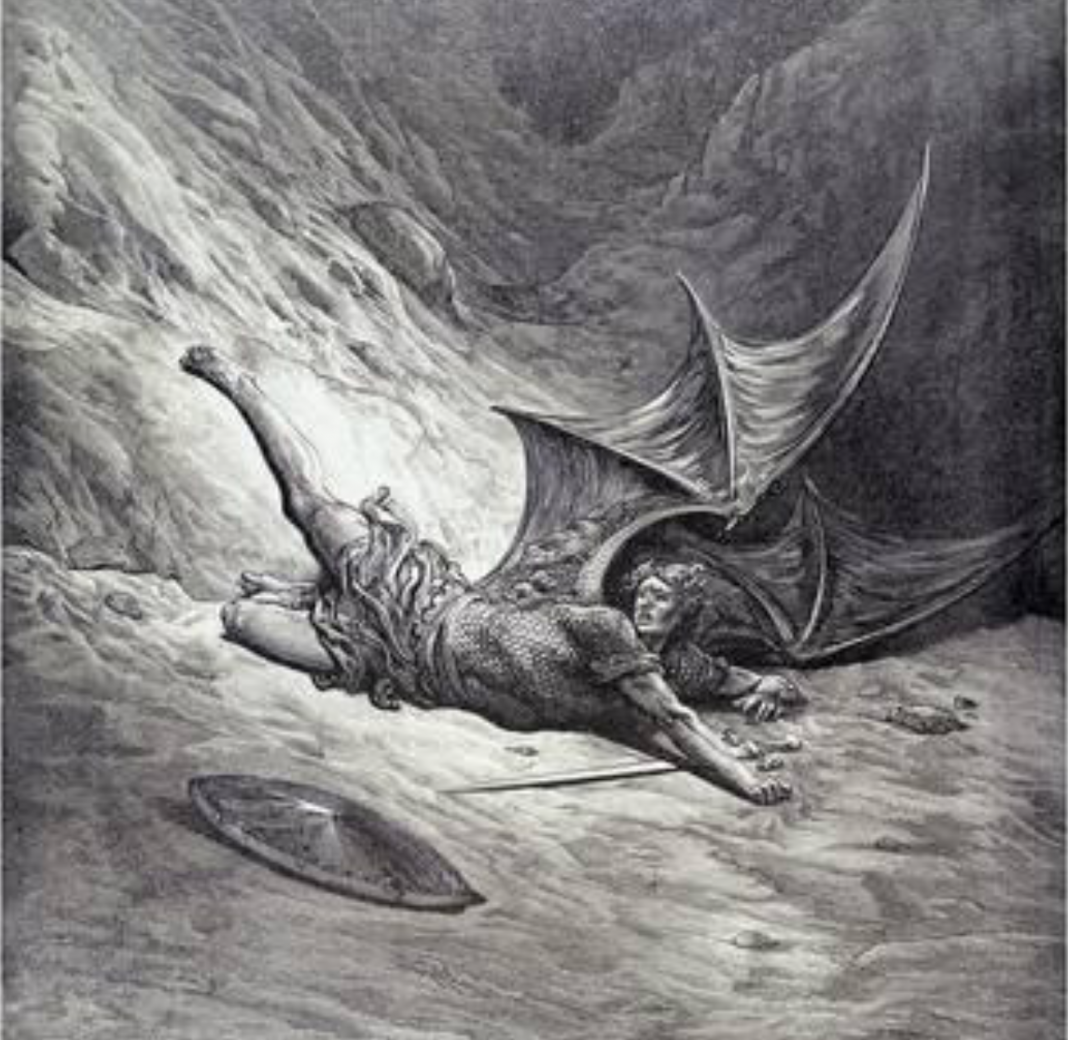 In a recent essay for Christianity Today, “Do All Plants Go to Heaven?,” Abigail Murrish speculates that GMOs might be present in the New Jerusalem. It’s certainly an interesting question. If “the whole creation groaneth and travaileth” while waiting for our adoption and redemption, then it makes sense to consider what “the redemption of our body” might mean for GMOs even if, as she admits, its a question we can’t definitely answer. And though I know I disagree with Gary Snyder’s Sunday school teacher, who told him that his cow wouldn’t be in heaven, I’m not sure what I think about the state of GMOs in the eschaton.

What troubles me about this essay, however, is the way it parses—or more precisely fails to parse—what kinds of techniques and technologies participate in redemption and what kinds are, well, demonic. The distinction between redemptive and demonic technologies is fraught and can be difficult to discern, but that only makes it all the more vital that we cultivate the ability to do so.

I should note at the outset that Murrish’s desire to find a common ground that can lead to a rapprochement between sustainable agriculture and big ag is commendable, but the footing her essay offers remains tenuous at best. Even the way she frames the two camps obscures the real issues:

One approach maximizes production and crop yields through the power of human innovation, arguing that genetic seed modification and GPS-guided harvesters are God’s provision to feed a growing population in a complex world. The other approach sees organic production and the local food movement as guardians of true flourishing, warning us not to overindulge human creativity at the expense of God’s original creation: our bodies and the land.

Her description of big ag oddly omits what is arguably its key feature: its reliance on chemical fertilizers and pesticides to increase yields. And I don’t see how local food advocates warn against “overindulg[ing] human creativity”: those who strive to farm sustainably know that doing so successfully requires much creativity and imagination. Organic methods of pest control are more complex and “creative” than simply spreading chemicals to kill unwanted bugs or weeds.

Today’s conversations about creation and our stewardship of it are often oriented toward Eden. Evoking farmer-philosopher Wendell Berry, they harken back to a world lacking advanced technology like tractors, businesses, and GMOs. . . . But in longing for the farming of old, we should be careful not to conflate the recent past with the sinless early days of Eden. The farmers of Berry’s writings also tilled a fallen earth. 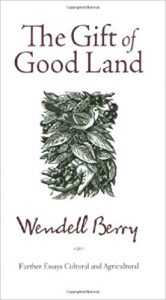 I’m not sure who Murrish has in mind when she refers to those who “conflate the recent past with the sinless early days of Eden.” This is certainly not true of Berry himself. And Berry explicitly argues that Genesis “can give us only limited help” in developing a biblical understanding of land use. As he goes on to argue, “The story of the giving of the Promised Land to the Israelites is more serviceable than the story of the giving of the Garden of Eden, because the Promised Land is a divine gift to a fallen people.” So yes, the farmers of Berry’s writings till a fallen earth, and they are well aware of this reality.

As Murrish goes on to write, “agriculture since the Fall has largely been a human quest for technologies to relieve the toil and overcome creation’s brokenness.” The grammar of this sentence suggests that Murrish sees relieving the toil brought about by the Fall and overcoming creation’s brokenness as parallel endeavors. It seems to me, however, that these two descriptions are roughly analogous to the distinction we need to make between redemptive and demonic technologies.

To explain this distinction, I want to turn not to Berry, but to one of his favorite authors: John Milton. In Paradise Lost, Milton dramatizes these two kinds of technologies through different uses of fire. As you’d expect, fire first shows up in Milton’s epic as the “penal fire” in which Satan and his crew suffer. But after the fallen angels awake in Hell, Mammon leads a band to the “veins of liquid fire” that flow under a nearby volcano and, through a clever technological feat, use this heat to inflate Pandemonium, the devil’s palace.

This demonic use of fire is presaged during the earlier war in Heaven. After the first day of fighting, when Satan and his minions were badly worsted, the fallen angels become mutinous. Nisroch tells Satan that he cannot endure another day of such pain and so will give his allegiance to anyone who “can invent / With what more forcible we may offend / Our yet unwounded enemies.” In other words, Nisroch is asking for a technocrat to step forward and provide more powerful technology. (This is part of a larger theme in Milton’s narrative, which is that Satan and his angels claim they are damned not because God is just or right, but simply because he’s stronger; hence, they continually contrive tricks to try to outwit God. God’s final victory over Satan comes not through force, however, but through the self-giving love of the Son.) Satan is happy to oblige and invents, on the spot, artillery, which,

with touch of fire
. . . shall send forth
From far, with thundering noise, among our foes
Such implements of mischief, as shall dash
To pieces, and o’erwhelm whatever stands
Adverse.

The next day, these cannons give them a brief edge over the faithful angels, but then Michael’s army begins throwing hills, which bury both cannons and cannoneers. You might call this the “unintended consequences” of Satan’s invention, analogous to superweeds, soil erosion, toxic runoff, and algal blooms. Through the first part of his epic, then, Milton portrays fire as God’s mode of punishment, yet the fallen angels repeatedly seek technologies that will make it their servant and help them strike back at God. However, these techniques are not redemptive; they are instances of reiterated rebellion against God.

But Milton doesn’t think that all technology is demonic and rebellious. After the Fall, when Adam and Eve finally turn their hearts toward repentance at the end of Book 10, Adam proposes to Eve that though they must accept the just punishment of God, they might also find ways to ameliorate the effects of his curses. Inspired by a recent lightening bolt, Adam muses:

such fire to use,
And what may else be remedy or cure
To evils which our own misdeeds have wrought,
He will instruct us praying, and of grace
Beseeching him; so as we need not fear
To pass commodiously this life, sustained
By him with many comforts, till we end
In dust, our final rest and native home.

Adam’s fire does not seek to “o’erwhelm whatever stands / Adverse,” as Satan’s did, but rather to “remedy or cure” the effects of the Fall. While it can be difficult to discern into which category a particular technology best fits, Milton draws a crucial distinction between redemptive technologies that ameliorate the effects of the curse and demonic technologies that seek to empower rebellion by “o’erwhelm[ing] whatever stands / Adverse.”

To return to Murrish’s argument, I think Milton would be skeptical of all attempts to “overcome creation’s brokenness,” warning that such efforts are likely to be rebellious rather than redemptive. In as much as industrial agriculture uses chemicals to turn soil into a factory that can manufacture calories, it fails to cultivate the gifts of life and instead relies on a demonic understanding of force. Of course, as Murrish argues, very few farmers fit the stereotype of an industrial, corporate villain, and most are uneasily caught in an economic and cultural system that is nearly impossible to escape.

Furthermore, it’s not just big ag that is under the sway of demonic technologies. From cryonics (storing human bodies in liquid nitrogen so they can be resuscitated once we’ve developed the necessary techniques) to parabiosis (injecting the blood of young people into older recipients to slow aging) to our more mundane fascination with lifespan-lengthening techniques, our culture longs to find technologies that will overcome creation’s brokenness and allow us to defeat death. But only one person can defeat death; for the rest of us, redemption lies in “the Spirit of adoption” that makes us “joint-heirs with Christ.” And as we await this final hope, we can certainly create technologies that “relieve the toil” or “remedy” the evils from which we now suffer.

One example of such redemptive agricultural technology might be the Land Institute’s perennial crops, like Kernza, that have the potential to allow farmers to imitate natural, prairie-type ecosystems while growing food for humans. These humanly-developed plants are radically different from Monsanto’s Roundup Ready corn and beans. One technology seeks to work with creation’s patterns, and the other promises humans the ability to impose their desires upon the world. One technology accommodates itself to creational limits, and the other strives to overcome them.

Yet because Murrish never makes a distinction between redemptive and demonic technologies, the conclusion of her argument begs the question regarding which farming practices–and which humanly-developed plants–might participate in the coming, eschatological redemption.

If agricultural technologies like genetic modification are to be a historic tool for both human flourishing and stewarding creation, it will require that consumers, scientists, and farmers collaborate.

After all, critics worry primarily about the unintended consequences that those corporations might miss in their quest to rush genetic technology to market and gain market share. But if the proverbial purveyors of corporate greed (John called them “anyone who does what is shameful or deceitful”) will be outlawed on the new earth, then we can assume that any GMOs making it through New Jerusalem customs will be managed with utmost wisdom and selflessness.

This conclusion turns on two rather large ifs, and Murrish’s essay never provides reasons to think that most GMOs and their accompanying pesticides and chemical fertilizers serve “human flourishing and stewarding creation.”

The question isn’t whether or not we will use technology, but which technologies are appropriate for a fallen people who have received the divine gift of land.

All agricultural methods rely on technology; the invention of the plow was a turning point in human civilization. The question isn’t whether or not we will use technology, but which technologies are appropriate for a fallen people who have received the divine gift of land. We can be grateful for the many technological comforts that help us “pass commodiously this life,” but we should be wary of demonic technologies that seek to control life, promising us freedom from the limits that death imposes. After all, in the wake of Christ’s resurrection, death becomes, as Adam finally realizes, “the gate of life.”

Will Wendell Be Jailed?