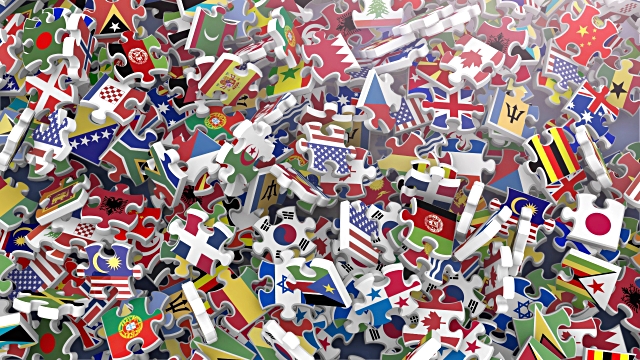 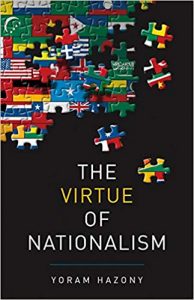 “For centuries, the politics of Western nations have been characterized by a struggle between two antithetical vision of world order: an order of free and independent nations, each pursuing the political good in accordance with its own traditions and understanding; and an order of peoples united under a single regime of law, promulgated and maintained by a single supranational authority.” Thus opens Yoram Hazony’s The Virtue of Nationalism. In an age when nationalism is slandered as xenophobia (at best) or neo-Nazism (at worst), Hazony’s book is a courageous emendation of the revisionist narrative that labels any iteration of nationalism as backward, tribal, and a slippery slope returning us to 1930s and 1940s Europe.

This political debate pits the particular, pluralist, and nationalist vision against the universal, homogenizing, and “international” dream of imperialism and empire. Conservatism celebrates boundaries; universalism, which is embedded in liberalism, knows no boundaries. As such, Hazony does a good job in correctly identifying imperialism as a foundation of the liberal, Enlightenment dream that envisions the world under a rational order. Such a supranational order abolishes traditions and particular identities in its wild dream of bringing world peace. Against this vision, conservatism has long defended a pluralist and nationalist tradition in international politics.

Furthermore, difference is the enemy to liberalism because difference leads to the possibility of conflict, and conflict is bad and must be avoided. The conclusion from this anti-pluralist view of the world is simple: Difference must be transcended to ensure peace. In other words, difference must be destroyed and all must be made the same—thus the Enlightenment coincides with not only a renewed imperialism but a reductionism which screens universalist ambitions.

Hazony’s tour-de-force through the history of political order stretches thousands of years, moving from the imperial powers of the ancient Near East to the present crisis of political order, which is nothing more than the same dialectic visible in the Hebrew Bible in Israel defending itself from neighboring powers but also being told by God not to transgress onto the lands given to other nations. And it is here that Hazony makes his boldest, but most important, claim. Because the Western tradition has the Hebrew Bible (the Christian “Old Testament”) at its heart, the political philosophy of the West (after the rise of Christianity) has long experience with this dynamic between the order of free and independent nations and a single regime of supranational authority. Other places around the world have not been so blessed with this dynamic—one might look to the Islamic World despite a “shared” religious heritage—precisely because the Old Testament does not factor as prominently in the Islamic tradition as it does in the Western tradition.

This is not a scandalous or shocking claim to people who are educated in the history of political philosophy and thought. Eric Nelson’s award-winning book The Hebrew Republic examined the “Century of the Bible” in European political thought and noted how arguments for the nation-state regularly made recourse to Hebrew Scripture. Eran Shalev and Mark Noll, among many others, have also written important contributions regarding the role of the Bible (and especially the Hebrew Bible) in the formation of American political thought and identity—something that Hazony also doesn’t fail to point out.

The product of the national order in the West is what Hazony considers to be the product of the “Protestant construction” which stood against the universalism of the Catholic imperium. Notwithstanding the fact that Catholicism historically promoted a vigorous homeland nationalism and patriotism—still codified today in the church’s extrapolation of the commandment to honor one’s parents which extends to the nation—Protestant readings of the Hebrew Bible saw a God who did not work through an ecclesiastic institution (as Catholics claimed) but through nations. Protestant nationalism was not (usually) an attempt to build a literal kingdom for Christ but concerned itself with good and loyal citizenship.

This tradition of Protestant-inflected nationalism is currently threatened by liberalism.  Liberalism is antithetical to nationhood because its foundational claim is atomistic individualism—the primacy of the isolated individual’s right to free movement and free choice. Moreover, the liberal vision of political order is determined by a reductionist anthropology. The free-moving and free-choosing individual cannot have impediments to his movement and choice, therefore anything that serves a potential barrier to the individual’s desires must be reduced in order for the individual to be made absolutely free. Therefore, the order of nations is eventually seen as a barrier to the liberal conception of “freedom.”

The liberal order seeks to make this vision a reality in the form of political unionism (such as the European Union) or through the elaborate international system where international law triumphs over national law. Some may see this as a good thing. Others will readily point out, as Hazony does, that there is an irony in the liberal claim of toleration which actually leads to forms of intolerance.

The liberal order, like Assyria or Babylon of old, obliterates alternative traditions and brings to an end the “order of free and independent nations, each pursuing the political good in accordance with its own traditions and understanding.”

Where the international and universal law comes into conflict with traditional law and customs, and we know these issues well, the traditional law and customs must be abandoned and the new international and universal law with its “rights” accepted. The abolition of local custom and tradition follows. Hazony highlights the rise of the ICC, the attempt to ban circumcision and Kosher laws, and health care “rights” that overrule religious objections as examples of soft totalitarianism in liberal legal theory. The liberal order, like Assyria or Babylon of old, obliterates alternative traditions and brings to an end the “order of free and independent nations, each pursuing the political good in accordance with its own traditions and understanding.”

Perhaps controversial for those who take their marching orders from the liberal media, Hazony goes to great and convincing lengths to show why Nazism was not, properly speaking, nationalist but a form of universalist imperialism with a nihilistic streak. The biological universalism of Nazism is fundamentally incompatible with any pluralist nationalist worldview. Moreover, the nationalist political order does not delight in the cult of violence and the transformative power of violence as fascism does. While nationalism has had violent episodes, it is not the inherently violent force that its contemporary critics paint it as.

Hazony’s work is a defense of actual pluralism—that is, real difference—which is in short order today despite all of the talk of “diversity” and “pluralism,” which too often mask a desire for assimilationist homogenization. The safeguard of pluralism is nothing short of the nationalist order, as Hazony makes clear throughout his work. This political idea is rooted in a richer understanding of the human being, not as an atomized individual as the classical liberal philosophers envisioned, but as a person rooted in community, heritage, history, and tradition. Are we born to particular people in a particular place with a particular history? Or are we born to ourselves independent of all ties?

Additionally, Hazony’s work defends the value of limits. The nation has very fixed and defined boundaries and does not transgress those boundaries (when it does, it crosses the border from nationhood to imperialism). Nationalism returns us to a world of nation-states, which is the “order of free and independent nations, each pursuing the political good in accordance with its own traditions and understanding.” Hazony’s work is not only conservative, it is moral; it shows how boundaries can lead to moral living whereas a lack of boundaries erodes morality—limits demand restraint, openness does not. The nation also gives one a place to call home, a place to care for, a place to build up and pass on to future generations—the nation calls for, and demands, the best in humans. Too often universalism, in the form of imperialism, brings out the worst in humans. Imperialism can disguise itself as something benevolent and “progressive” but in trying to assimilate all to its order, it casts a blight on local places and communities.

If the Hebrew Bible is the narrative that hands down the idea of particularist order, as Hazony asserts, then the atrophy of the biblical consciousness dooms the West to a slow march to universalism. If this happens the West will itself disappear because the West is something distinctive and particular rather than universal. At the heart of Hazony’s work is that the “West” as it is known to us is the product of a nationalist order and that it is threatened by the new universal order which will brush particular customs and traditions into the dustbin of history. The current political dynamic is not new at all. It is deeply ancient. One might go so far as to say that it is also deeply biblical.