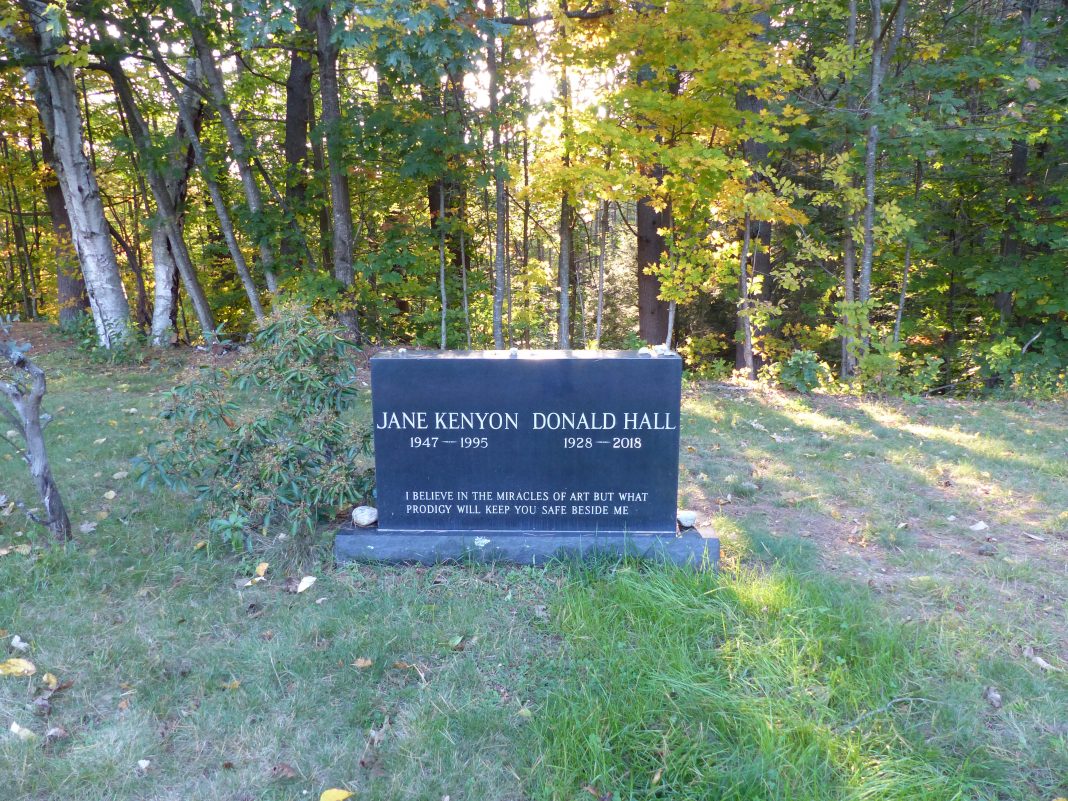 While wandering in a used bookstore this summer, I picked up Donald Hall’s String Too Short to be Saved. I enjoyed Hall’s stories about his grandparents’ farm (the book’s title is taken from the label on a box that Hall found in the attic; inside the box were short pieces of string). Just a few days after finishing the book, I heard about Hall’s death at the age of 89. This fall, I read his longer collection, Eagle Pond, and when we were in New England last month for a research trip, we took a short detour to drive by their farm house and to visit the cemetery where Hall and his wife, the superb poet Jane Kenyon, are buried.

Reading Hall’s reflections on rural New Hampshire, and then driving through this part of the country, brought home to me the poignant history of this region. Some of the towns we passed through have half as many residents as they did 170 years ago. In the mid-nineteenth century, approximately 70% of the land in this area was cleared for farming. Today, nearly 80% of Vermont and New Hampshire are covered by forest, even as their overall populations continue to grow. The countryside is marked by well-populated cemeteries and sparsely-populated villages.

This unsettling has been going on for a long time. In 1899, New Hampshire’s rural communities were already depopulating as residents left for urban centers or more fertile land out West. So the governor established a yearly day for the diaspora to return home and reconnect with old friends and family members. Hall writes about attending many “Old Home Days” in his community, but while earlier years hosted lively gatherings, more recently, it’s only the old people who show up to swap stories and reminiscences.

In the absence of thick, intergenerational communities, it becomes even more imperative that we find ways to narrate the history of our places and those who have gone before us—such narratives are essential in helping people recognize how their lives count.

Though Hall’s writing celebrates the past without being sentimentally nostalgic, and though it is full of joy and delight in present goods, it repeatedly raises the question that Robert Frost’s oven bird asks: “What to make of a diminished thing”? This region once sustained communities that passed on living traditions and gave their members’ lives a sense of meaning and purpose, but these communities are struggling to survive. In the absence of thick, intergenerational communities, it becomes even more imperative that we find ways to narrate the history of our places and those who have gone before us—such narratives are essential in helping people recognize how their lives count.

In an essay about rural New Hampshire culture titled “Rusticus,” Hall proposes what he terms “Hall’s law”: “When fifty percent of the local population remain aware of the maiden names of their great-grandmothers, or can visit the graves of ancestors born a century and a half ago, or can tell stories handed down from a hundred years back, the spirit’s necessity for connection may be satisfied.” Hall mourns the loss of such communities and expresses gratitude for those few places that still sustain “a continuous past that lives in the air, in relics, and in the stories that old people tell. . . . [L]ibrary antiquarianism is documentary and disconnected. It is better than nothing, [however] because it gives evidence of our famine, of our need for the nutrition of historical connection against the thin, bare, accelerated moment.” Our internet culture—and the instantaneous media ecosystem it fosters—has only made the past more distant and bare since Hall penned these lines.

Hall argues that it is the presence of the known and remembered dead who provide a fertile soil in which meaningful lives can grow. As he puts it, “The lived past thrives where people live among the dead.” People who live among their dead are likely to be Stegnerian stickers; they are people whose motto, Hall claims, is “Lentior: SLOW DOWN.” Hall thus concludes his essay by urging his readers to “spend quick lifetimes telling old stories while we stand on dirt thick with the dead” (169). When we live on dirt thickened by known dead, we’re more likely to remember the story we are part of and have a visceral sense of the holiness and significance of our lives.

Hall seems to have been a cultural Christian more than a confessional Christian, so he probably wouldn’t fully agree with Flannery O’Connor’s diagnosis of human longing and need. Nevertheless, her perception of the human need to count aligns, I think, with Hall’s. In one of her typically horrifying stories, O’Connor suggests that those who have lost their story become desperate for anything that promises to give their lives significance.

In “The River,” a little boy “of four or five,” is falling through the cracks of a dysfunctional family that can’t be bothered with him. He is apparently cared for most of the time by a series of harried and negligent babysitters. One evening, he tags along with his latest caretaker to hear a preacher lead a healing service at the river. Before this evening, “If he had thought about it before, he would have thought Jesus Christ was a word like ‘oh’ or ‘damn’ or ‘God,’ or maybe somebody who had cheated them out of something sometime.” But when he watches the teenaged preacher stand in the river and declaim to the gathered crowd, the boy feels himself on the verge of a powerful narrative, one that could give his life the meaning it so utterly lacks. The preacher then asks him if he’d like to be baptized, telling him,

“If I Baptize you, … you’ll be able to go to the Kingdom of Christ. You’ll be washed in the river of suffering, son, and you’ll go by the deep river of life. Do you want that?

“Yes,” the child said, and thought, I won’t go back to the apartment then, I’ll go under the river.

“You won’t be the same again,” the preacher said. “You’ll count.”

He baptizes him, and after lifting him out of the water, the preacher reiterates, “You count now. . . . You didn’t even count before.” When the boy wakes up the next morning back in his apartment, his parents sleeping off another hangover, he returns to the river by himself, intending “not to fool with preachers any more but to Baptize himself and to keep on going this time until he found the Kingdom of Christ in the river.” While his initial baptism apparently didn’t work—he ended up back at his parents’ apartment that night—this self-induced baptism is more permanent. He drowns.

O’Connor’s story portrays—in the large and startling figures that are her trademark—our deep human desire to count. When people are told they don’t count unless they are rich and famous, unless they have a certain number of Twitter followers, unless they are on the bleeding-edge of some social or political movement, hope becomes a desperately scarce resource. In such a culture, people will go to great lengths to make their lives count. If multigenerational communities disintegrate, their narratives of meaning will cease as well, and those who are left behind may be desperate enough to fall prey to other sources of meaning. The ongoing opioid crisis is just one manifestation of what happens when people no longer feel as if they count.

If O’Connor’s story “The River” portrays a place where the holiness of life has been obscured and hope has nearly gone extinct, Wendell Berry’s Port William fiction narrates a more healthy culture, one that continually reminds its members they count. One example will suffice. Even as Elton Penn grew more and more sick, he refused to go to the doctor. One evening, Elton’s wife invited Henry Catlett and his wife over for dinner to cheer up Elton. During the meal, they swapped stories, recalling many good days of hard work they had shared. Elton remembered a day he told Henry to cut down a bunch of old grain sacks hanging from the roof of a shed. Henry insisted he heard a humming noise coming from the sacks, but Elton told him he was making it up. When Henry cut down the sacks, they landed at his feet and a swarm of bees flew up. “His clothes were just sizzling,” as Elton remembered it. “That had been a long time ago, when Henry was about fourteen and Elton not yet thirty. Probably neither of them any longer knew whether Elton had known about the bees or not. But they played out their old game of accusation and denial once more, both enjoying it, both grateful to be in the same story.” When Elton got up from the dinner table, he staggered and fell down, dead.

This story, like O’Connor’s, ends with a death, but unlike the boy who baptizes himself in a desperate effort to make his life count, Elton already knows his life counts because he knows the story he is part of. A community that keeps its history alive through shared stories, stories that remind its members who they are and how they belong, is a community that can foster hope. It is a community that actively reminds its participants that they are parts of a larger whole. When Elton dies, he dies as a member of a convocated membership, and that makes all the difference. (Berry’s understanding of convocation is deeply influenced by the Biblical tradition.)

If people know they count, they may have the motivation and courage to find ways to act on this reality.

Reading Donald Hall’s essays reminded me that as more and more people no longer live on dirt thickened by known dead, it becomes increasingly necessary to narrate the histories of our lives and places to each other so that our neighbors feel themselves to be in the same story as one another and their Creator. Such a status makes it easier to imagine how we might fulfill the two great commandments, to practice love for our neighbors and our God. If people know they count, they may have the motivation and courage to find ways to act on this reality.

Of course, there has to be an ontological root to this claim or it’s all just sentimental gibberish. Flannery O’Connor was once having an elegant dinner with a lapsed Catholic whom she describes as a “Big Intellectual.” This intellectual told O’Connor that the Eucharist was a beautiful symbol. O’Connor replied “in a very shaky voice, ‘Well, if it’s a symbol, to hell with it.’” I’m inclined to think that O’Connor, right down to her shaky voice, was right. Sharing stories of the dead who have gone before us is merely rearranging deck chairs on the Titanic if the dead will not indeed be raised.