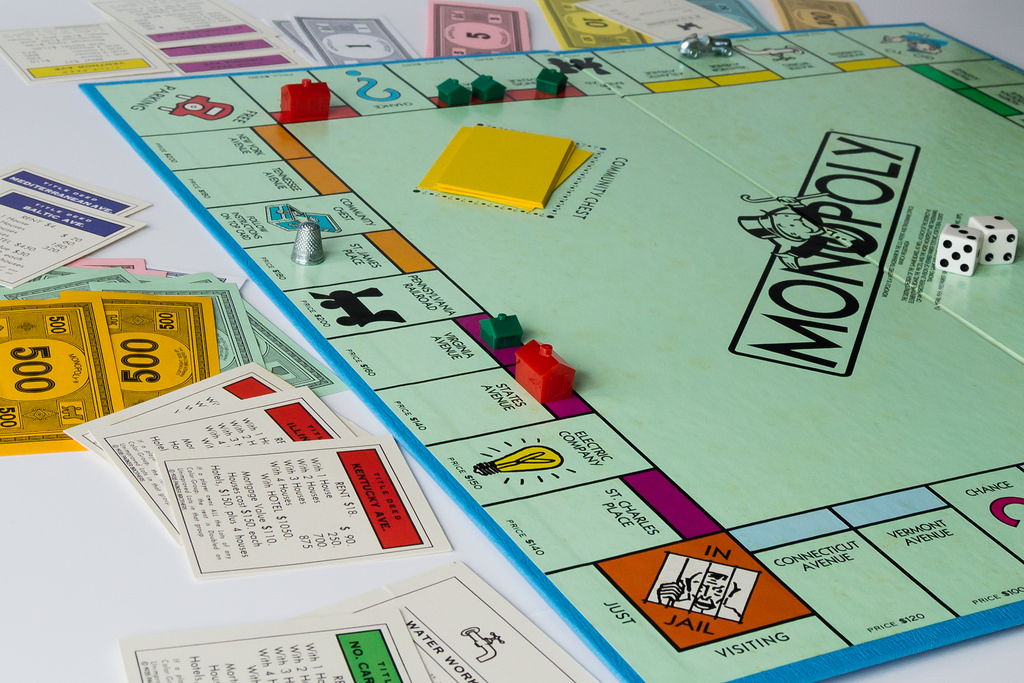 I love board games.  Truth be told, I am a sucker for games of all types, but there are a number of aspects to playing a board game that simply cannot be replicated by any electronic game.  There is a flow that develops where conversation waxes between turns, and then ebbs as all eyes fixate on the die being rolled or the card being played. The immature, peevish, and bullying behavior that is quite common in online gaming is mitigated by the fact that seated across from you is a friend or family member, and you cannot simply log off and throw down your controller to disconnect from the experience. Additionally, board games provide gratification for the senses that you would be hard-pressed to obtain from a computer game or an app on your iPhone.  The smell of old cardboard when the box is opened, the sound of dice being shaken and their subsequent clatter against the tabletop, and the energy and emotion of the other players in the room all make each turn unique.

One concept that has, to my knowledge, no exact analog in the various other forms of gaming is the idea of “House Rules.”  This term, succinctly put, means whoever hosts is allowed to tack on caveats and qualifiers to the rule book’s requirements.  For instance, House Rules might determine the starting order, or be used to break a tie, so long as they do not deviate too much from the game’s foundational rules.

This question of House Rules came up during a trip my wife and I made just after the New Year.  The weather had turned poor and instead of a night on the town in Asheville, North Carolina, the two of us and our dog settled into our cabin and decided to look through the stash of games the cabin owner had left out for guests.  We settled on Monopoly and as we were setting up the board and selecting our pieces I asked, “What’s the rule for the Banker?”

“What do you mean?” she replied.

“Can they cheat?” I responded.

She looked at me, a little confused, and said, “Why would they be able to cheat?”

“House Rules, that’s how we played when I was a kid,” I replied.  From there I launched into a history of the privileged position of the banker in my family’s variation of Monopoly.

Both of my parents worked when I was young, so I spent a good deal of time at my grandparents’ house. I was not alone either, because in the house lived aunts and uncles, either finishing college or in various stages of transitioning to adulthood.  Like many big Catholic families, life in the house centered around the kitchen table, and this made it the perfect spot for board games.

This brings us to the Monopoly House Rules I was raised on.  When we played, the banker was allowed, and even expected, to skim off the top.  This could happen in multiple ways. Sometimes, after passing “Go” and collecting two hundred dollars, an extra hundred might make its way into their personal stash.  For particularly bold bankers, when a player purchased a property and handed the requisite cash to the banker, the $180 dollars for Tennessee Ave. would go surreptitiously into the banker’s personal pocket.

This was enough power to effect the outcome of games, and the position was of sufficient importance that it was usually fought over, and the most intense disagreements usually occurred when arguing about which player should not be the banker.  Regardless of who ended up holding the power of the purse, the rest of the players would double count their own payouts and always cast a wary eye towards the bank anytime a major transaction was occurring.

If a malefactor was caught, in addition to verbal condemnations from the other players, they would be forced to return their ill-gotten gains and be assessed a penalty of double the amount they had appropriated.  While the recriminations were harsh, it was never enough to scare anyone straight for the long term and rarely resulted in the cessation of theft for more than a few turns.  Everyone knew who the worst offenders were (Uncle Ron) and lobbied for the more evenhanded among us (typically my grandmother) to be the banker at the beginning of the game.

This in-game dynamic is as memorable to me as playing the game itself.  It was this thought that struck me when my wife took such umbrage at the idea that the banker was allowed to cheat. Those were our House Rules, and they taught me an important lesson.  Bankers do cheat.  Anyone in a position of power should be watched closely: because the temptation to go for the easy win and line your own pocket is so strong, nearly everyone will succumb to it.  However, physical proximity is a wonderful check on these abuses.  Being across the dinner table or down the street from a potential victim makes them harder to scam and might make a cheater think twice before they act.  I also take pride in the fact that, given Monopoly’s inception as a warning against unfettered greed, our rules followed that original spirit.

Teach your children this lesson and they will be less surprised when the financial industry enriches itself to the detriment of millions of hard working people, worldwide.  It will dampen the shock when companies that are so ruinous to society are exempt from liability, subsidized, and bailed out by government power brokers.  Maybe, when they are grown, it will also make them think twice about giving too long a leash to those who claim the market can regulate itself or that technocrats can be trusted to be altruistic.

As our physical lives continue to cede ground to our digital ones, and as the kitchen table loses sway to the room with the biggest TV, I fear that as a society we will lose those fun, organic, and teachable moments, like the ones I had playing Monopoly with my family.  You can find any answer you want with your smartphone, but it is a poor instrument for passing along wisdom.  Game night might not be the right time to explain deregulation and bailouts, but it is the perfect time to teach the kids to keep an eye on the banker.

The City of Bell and the Problem of Local Control

A Word With Worden’s First Lady