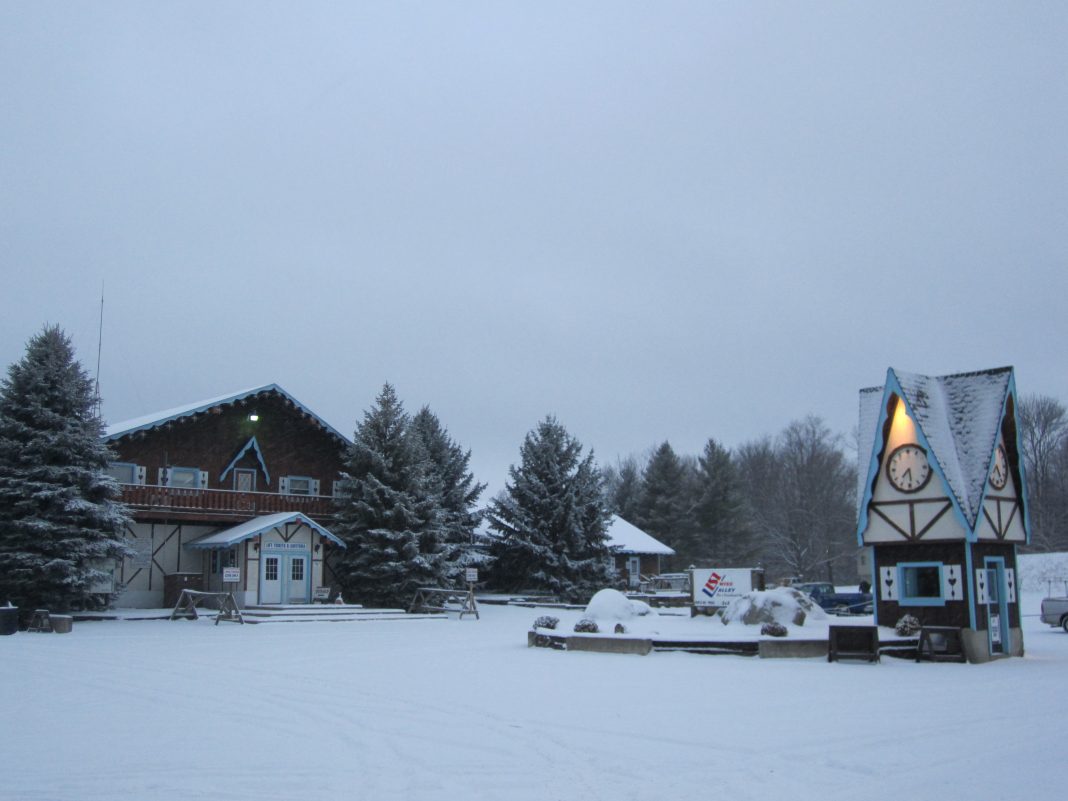 During the fall color tour, we often drive to a ski resort near my home in southwest Michigan. It’s about the only time my family visits the place, which goes by the optimistic name of Swiss Valley (base elevation 975 feet). Its highest ski slope tops out at 1,200 feet, which affords the only 360-degree panorama around. They offer free rides to the top in a four-wheel ATV, so leaf peepers can take in the October splendor.

Yet for parents with drill sergeant proclivities, there’s another option: they can direct their children to walk up the big hill instead. To do so provides not only a thigh-burning workout, but breathless conversation of a most spirited nature. Here’s a snippet of the filial repartee that I’ve come to expect during the climb:

“This is, by far,” spat my eldest daughter, a long-legged and extremely fit volleyball player, “the stupidest thing you have ever made me do.”

Maybe it was, but up we went until we bagged the 1,200-footer, smug in the knowledge that our own two legs had propelled us there. Then, with nothing else to prove, we flagged down a four-wheeler and caught a ride to the bottom.

But as we bumped downhill it occurred to me that this approach was all wrong. And not simply because I’d provoked my daughters into a feat of unnecessary exertion – it’s my special calling to do that. No, in a larger sense, it was that our cardiovascular defiance had run contrary to the gravitational premise of the place. At a ski resort you’re supposed to let machine power take you uphill and then let gravity take you down. And for me, it’s precisely this mechanical intrusion that makes downhill skiing such a conflicted enterprise.

While I greatly admire the courage and athleticism of downhill skiers, I can’t find much to like about downhill ski resorts. The first turn off for me is their architecture. They blight the landscape with boxy-bland condos and exit-ramp grade hotels, whose sprawl-friendly design subtracts and detracts from the heavenly scenery they were meant to serve.

Ski resort developers also inflict great trauma on mountains, hills and fragile alpine ecosystems. Acres and acres of native trees and rock forms are bulldozed away in broad, barren swaths to make ski runs — a heavy-handed practice that mars the ancient visage of hills and ridgelines. Harsh floodlights, robotic snow machines and looming ranks of steel ski lift towers either complete or desecrate the scene, depending on your point of view. For a sport so rooted in natural elements, ski resorts project an assembly line aesthetic where nature can feel as stage-managed as a miniature golf putting green.

What’s the option for those who’d rather forgo the Orcish overtones of first-world recreational tourism? If you really love downhill skiing, I suppose there isn’t one. Nothing can rival its vertical dash, Olympic panache and après ski amenities. To race with abandon through a foot of powder down a 12,000-foot mountainside in Colorado (or even a 1,200-foot hill in southern Michigan) brooks no comparison.

But if you want rigorous exercise, affordability and skiing that’s easy on the environment, then consider the hyphenated alternative: cross-country skiing.

The main differences between cross-country and downhill skiing involve the equipment and terrain. Cross-country skis are long and narrow, with boots that connect to the ski at the toe, but leave the heel unrestricted. This allows the skier to kick-and-glide across level ground or to sidestep up hills and inclines.

On a cross-country ski trail, you meet the landscape on its own terms. It’s usually done on a low-impact route through fields and forests that will double as a hiking trail after the snow melts. The sights and sounds of nature are paramount. It’s quiet enough to hear the five-note song of a chickadee, or the castanet-rustle of oak leaves in the winter breeze. And wild enough — this recently happened to me — to run across a still-steaming clump of wild turkey poop on the trail.

Our favorite place to ski locally is Love Creek County Park near Berrien Springs, Michigan. The park is foremost a natural area, with 150 acres of wild habitat and six miles of trails. Love Creek looks and feels like a nature center that just happens to rent skis. They issue the equipment ($5 for children, $10 for adults) in a room flanked by tanks of native fish, turtles, snakes and salamanders. A long wall of floor-length windows faces a beech maple forest. Outside, a host of seed and suet feeders are aflutter with evening grosbeaks, blue jays, purple finches, downy woodpeckers and red-headed woodpeckers. It’s like a live movie trailer for what awaits on the trails.

Of our visits to Love Creek, one outing stands out as especially memorable. It was the day my wife and I escorted a Christmas break crowd of six cousins, two of whom had no previous ski experience.

Apart from the rented skis, we had little in the way of outdoorista apparel. Amanda, my niece, sported a second-hand wool overcoat that could’ve come from the trenches of World War I. Yet her urban Detroit, thrift-store chic fit right in with the fuddy-duddy earnestness that’s peculiar to “XC ski” culture. There were rusticated men with frightening neck beards, for instance, and more than a few women who appeared to have cut their own hair. There were Nordic purists who prefer herringbone knickers and classic wool sweaters (scratchy as medieval hair shirts and likely redolent of moth balls). There were sartorial basket cases, such as myself, who showed up in whatever Dad jeans and faded sweatshirt they happened to pull on that morning.

Around here at least, the XC ski scene still exudes a certain upright Midwestern propriety; the lutefisk and church-potluck ethos that Garrison Keillor once lampooned on public radio. You do see some rainbow sherbet-hued ski wear at places like Love Creek, but nothing like the polyester avalanche that predominates on downhill slopes.

With few social distractions, what you mainly do on a cross-country course is ski.

Once outside the nature center, we geared up under a cerulean blue sky dotted with junco-grey clouds. There was no chairlift line (but then there was no chairlift!) and the trail began 20 feet from the building. We set out for the green and yellow “Easy” route, as advised by a park ranger who rightly pegged us for slow movers.

The course lay gentle on the land, little more than a footpath with snow cover. It first dipped down to cross a wooden footbridge over the purling waters of Love Creek. Then it turned into the woods where it hugged the lip of a heavily timbered ravine. It circled a marsh where a goshawk cruised overhead, eager for some careless vole or rabbit to make a fatal, but providential (for the hawk anyway) appearance.

There was little in the way of heart-throbbing excitement. The modest hills — and you could scarcely call them that — would bestir no downhiller’s heart. Nothing much seemed extraordinary, save for the massive and venerable sycamore that we group-hugged for a family photo. We skied some, fell-down some, bumped into a few trees and generally ended up tired, but invigorated; overheated, yet with toes and fingers numb from the cold. It was, in its own richly subtle way, a peak life experience.

So why did we enjoy it so? What kind of dullard would prefer miles of horizontal rectitude to the near-erotic tingle of a downhill run?

The fleeting nature of a holiday gathering had much to do with it. When children are young, family get-togethers are so common that we take them for granted. They sometimes feel compulsory rather than celebratory. Then, before we know it, the entropy of the late teens and 20s pulls our kids away from us; their orbits become wider, less predictably elliptical. Kuwait. California. Utah. Chicago. For us to meet at the same time and place can become a mathematical impossibility.

The outing at Love Creek surmounted all that. They were home. The park was nearby. It was cheap, it was easy, it was fun. Cross-country skiing, a humble, agreeable sport with a low-bar for entry in terms of age, income and ability, had made it so.

There must be others, perhaps ex-downhillers with creaky knees, who would enjoy it just as much. All I can say is give it a chance. Newcomers tend to underestimate the deep, kinetic satisfaction that comes from the kick-pole-glide motion that is the fluid gait of a cross-country skier. It’s magically intuitive; not unlike the sensation that people feel when they paddle a kayak for the first time. And for good reason. A kayak paddle, like a pair of cross-country skis, comes encoded with several millennia of accumulated wisdom and design. It works right, and feels right, because our ancestors perfected the body mechanics eons ago. Their mediums were wood, whale bone and seal skin; ours are plastics and poly carbons that many of us can’t pronounce, much less spell. But the underlying spirit of fluidity and intuitive mobility remains.

When we use skis in a natural setting, we reconnect with their original function: not just as a toy for play, but as a means of transport. It’s for this reason, 5,000 years ago, that some proto Scandinavian disruptor-types invented a tool that could leverage a person’s arms and legs to glide atop the deep snows of northern Europe. Even today, that’s the basic rationale for cross-country skiing: a walk in the winter woods made easier by the balance poles and long, skinny flat things we strap to our feet.

Finally, there’s the cross-country ski enterprise itself, as seasonal and ephemeral as an Indian hunting camp. Come spring, all of it will simply vanish with the snow. There’ll be no signs at Love Creek (except for some pink trail ribbons) that anyone on skis ever passed this way. In an age when even a well-intended sport like downhill skiing can denude the earth, it’s hard to imagine a better way to cross the country than that.

The Festivity of the Just