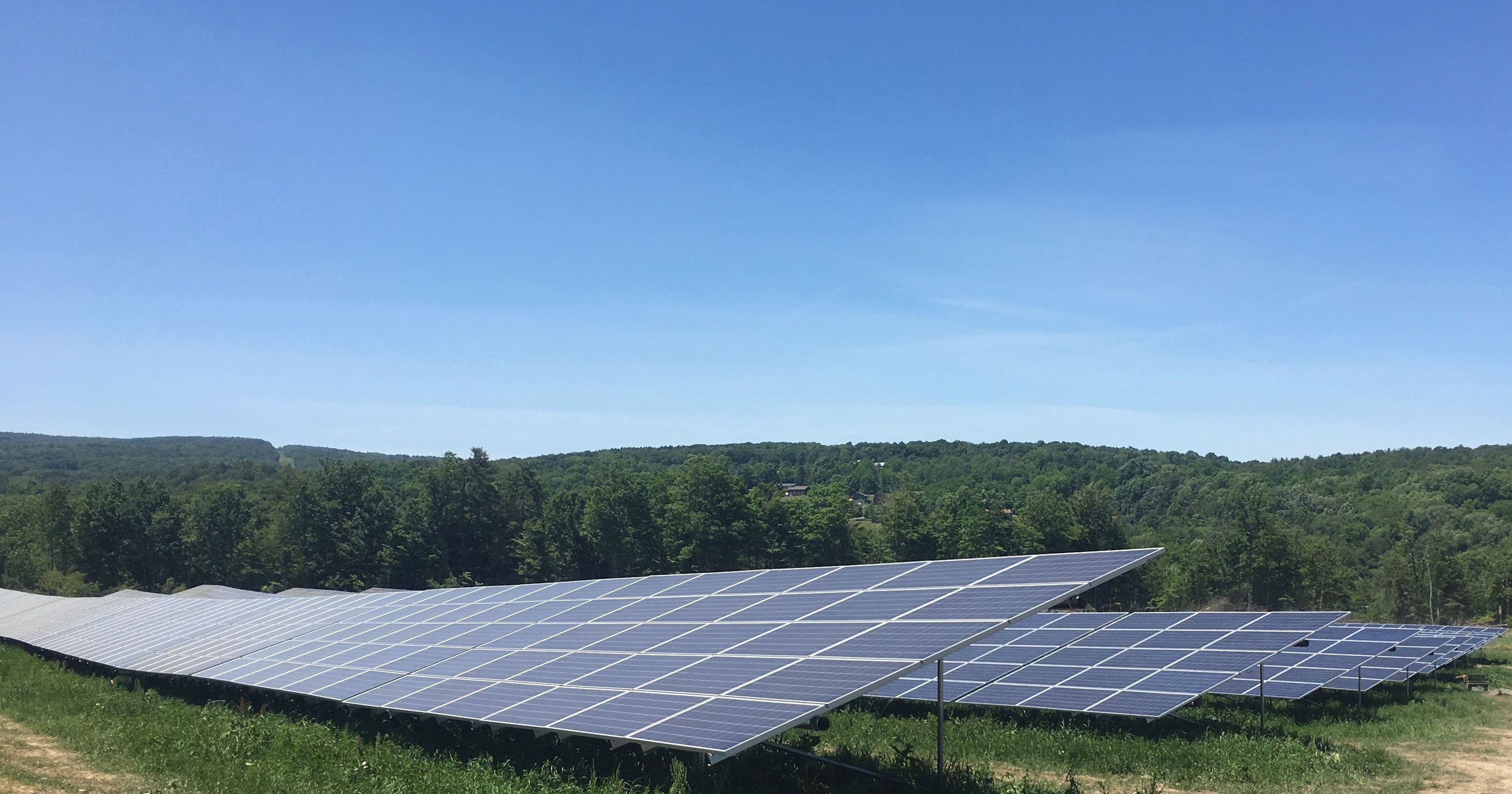 In 2017 I moved back home to Livingston County after serving seven years in the United States Marine Corps. A father, a veteran, and a millennial, I spent the last three years of my service stationed in the National Capital Region. My wife and I were ready to move back to the peace, tranquility, and rural beauty of our native Western New York to raise our growing young family.

Our return home has been better than we dreamed. We never realized just how much we missed the beauty of the seasons, the humidity-free summers, the Greenway Trail, Letchworth State Park, and “Sunday Drives” across our beautiful county. Yet the more we’ve re-explored our county, the more we’ve come across troubling changes to our local terroir; windmills on the ridgelines in Wayland, blue-green algae blooms in Conesus and Hemlock lakes making the water unsafe (and sending our son to the ER for two nights with an unknown blood infection), and now, the abhorrent black holes of solar fields built on farmland and frequently adjacent to state parks like Letchworth, the Greenway Trail, and Sonyea State Forest. I have been disgusted to watch local communities consider sacrificing thousands of acres of pristine farmland, wild life habitat, and God’s green earth at the altar of “renewable energy.” Which is worse: the underlying greed that appears to be motivating land owners to install black holes for all their neighbors to enjoy, or that this economic coercion is being deliberately pushed by Albany onto our local farmers who are struggling to survive? Furthermore, the real “winners” of these solar land grabs are out-of-state companies from California, Illinois, Massachusetts, France, and Italy that will buy, sell, and trade the renewable energy credits, cover the land, bring in 3 full time jobs per solar field, and collect millions in revenue. Communities are asleep at the wheel as Town Boards pass legislation to allow these solar fields to be built.

To be clear, local, sustainable, and renewable energy economies are a good thing, but we are deceiving ourselves if we think solar panels will fix our nation’s underlying issue of rampant consumerism. A study conducted by Environmental Progress in 2017 raises serious questions about the claim that solar power is “renewable.” The research found that “Solar panels create 300 times more toxic waste per unit of energy than do nuclear power plants. Solar panels contain toxic metals like lead … chromium and cadmium, known carcinogens. All three are known to leach out of existing e-waste dumps into drinking water supplies.” A study published by the German Stuttgart Institute for Photovoltaics concluded that cadmium “can be almost completely washed out…over a period of several months…by rainwaters.” Furthermore the lead scientists added that the issues of disposal for solar panels “will explode with full force in two or three decades and wreck the environment.”

The industry standard for solar panel life expectancy is 20-30 years. Considering the current methods of “recycling” are limited, destructive, and/or coercive, we are foisting the burden of disposal onto our children. Option 1 appears to be the good old-fashioned trick of dumping the panels into a landfill, consequences be damned. Option 2 is selling them back to countries in the Middle East to create mega-solar fields out of low performing panels. Option 3, the most insidious, is to illegally resell the solar panels as “second-hand goods” and dump them into e-waste sites in the developing world. Thanks Ghana, Nigeria, Vietnam, India, and Pakistan for taking our trash, but don’t worry about the carcinogens leaking into your local water source, they’re renewable!

I’ve heard the argument that “giving the land a rest” will be good for the farm and the farmer. Perhaps they’ll even be able to reinvent themselves as organic farmers after 25 years of a chemical-free existence. But I think I’ll pass on the cadmium-laced commodity crops that will be harvested and fed into the American Food System 30 years from now. How about the deconstruction of the solar fields in 25-30 years; surely the installation company will take care of that? Since 2016, seven leading solar investment companies have gone bankrupt, leaving the local tax-payers, communities, and municipalities to pick up the mess. Considering the entire solar panel industry is propped up by a few billions of dollars in state government subsidies, tax exemptions, and mandates (read Governor Cuomo’s 2015 NYS Energy Plan, Volume 1 pg. 70 is a good starting point), shouldn’t we think twice about banking our children’s future on the stability and honesty of state and federal politicians?

We must be clear-eyed about the evil side of “good” things.

You may be asking; why does this guy hate solar energy? I don’t, despite the obvious drawbacks with recycling panels and the dishonest claims that solar energy is “renewable.” As Alexander Solzhenitsyn teaches us, “The line separating good and evil passes not through states, nor between classes, nor between political parties either–but right through every human heart–and through all human hearts.” I still believe solar can be a vital resource to future energy independence when it is built and operated in areas of the country uniquely suited for large scale solar projects. The fact is we must be clear-eyed about the evil side of “good” things. We must be willing to apply common sense and ask ourselves; why is the state of New York pushing large scale solar projects in a green region known for its success in agriculture, dairy, wineries, and tourism? In the summer, Letchworth State Park hosts over 700,000 tourists to see the “Grand Canyon of the East,” and the tourism industry contributes over $3 billion into the Finger Lakes economy.

Moreover, for all our summertime beauty we still have an abundance of miserable winters. In fact the “sunniest” cities of Upstate New York leave most of us deficient in Vitamin D. Rochester is in the lead with 165 days of sunlight, followed by Syracuse with 161 days, and Buffalo in last place with 157 days of sun. Take into account that the largest solar projects in the US are located in the Mojave and Sonoran Deserts of California, in Boulder City, Nevada, and Yuma County, Arizona which receive 270, 284, 294, and 313 days of sunlight respectively. It should make us wonder, why large scale solar projects in Upstate New York?

This is another rendition of corrupt downstate New York politicians forcing their ideological self-righteousness upon the people of Upstate.

Despite our obvious lack of sunlight, as a region, we’re still planning to install solar fields on farm land, adjacent to state parks, and in the backyards of our local communities. Why? I believe this is another rendition of corrupt downstate New York politicians forcing their ideological self-righteousness upon the people of Upstate, much like Mario Cuomo did to the folks of Allegany County in 1989-1990 over nuclear waste. For now, the governor is dangling a handsome financial carrot to the “red necks” of Upstate New York in exchange for their land development rights and 25 years of complete submission. If we say “no thanks” to the carrot, how long will it be before Governor Cuomo and his accomplices unleash the sticks of eminent domain and/or invoke Article 10 of the New York State Public Service Law to force us into submission? Article 10 “empowers the New York State Board on Electric Generation Siting and the Environment (Siting Board) to issue Certificates of Environmental Compatibility and Public Need certificates authorizing the construction and operation of major electric generating facilities” (emphasis added). Who determines public need? What if we, the people, disagree with our distinguished Governor’s determination that NYS must generate 50% of its energy from renewable sources at the expense of highly productive farmland and the strength, health, and beauty of rural communities? Simply put; if we don’t want black holes in our back yards will the Governor listen?

I suppose we could maintain the status quo and do nothing substantive about these burgeoning fields of chemical-laden panels. Perhaps this is just another rendition of the American Dream, to create insurmountable and long- lasting problems for our children to deal with while we ignore the realities of the present moment. But I hope and pray that the people of Upstate New York haven’t lost their fighting spirit after decades of Albany intimidation, coercion, and corruption.

Getting the Garden Going, One Baby-Step at a Time