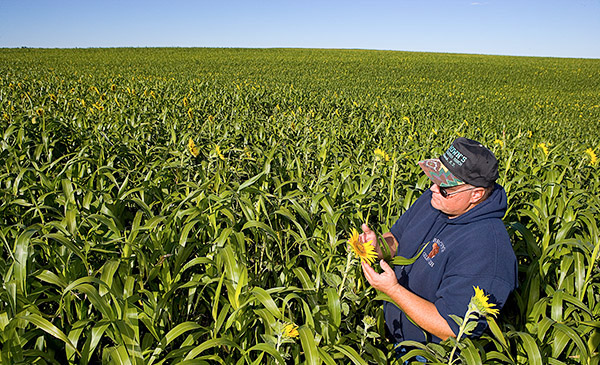 In my efforts to point people to various methodologies of eco-agriculture I often encounter those who dispute these approaches. One of the frequent refrains I hear is, “We can’t go back to those old ways, we must use technology to feed the world.”

People who make such assertions assume that practicing agriculture in a way that differs from the industrial monoculture-based approach is somehow unscientific and backward. In short, they consider people like me luddites, though I doubt many know the origins of that term. They give little thought as to how industrial agriculture developed to its state today and obviously have little understanding about how productive eco-agriculture is.

First, we must dispel the notion that the only way to feed the world is through the technology of industrial agriculture. For round numbers we’ll say the Earth’s population is seven billion people and expected to climb to nine billion sooner than people realize. Along with these numbers, we must keep in mind that under our current system of agriculture, globally one-third[1] of the food produced never makes it to people’s mouths. In the U.S., that figure jumps to as much as 50 percent according to a report from The Guardian.[2] Lest we allow some farmers to make the claim they feed the world, let’s consider that most of the world’s grain crops don’t even go directly into human food products but instead go to feed livestock or produce ethanol.[3]

Second, to assume that eco-agriculture (or natural systems agriculture or regenerative agriculture or a host of other names and methodologies) means reverting to techniques and practices that are not productive or sophisticated is arrogance of a high order. In fact, those who are on the leading edge of alternative eco-agriculture are best described as intellectual agrarians, not backward bumpkins.

Many within the USDA’s Natural Resources Conservation Services are well-trained scientists out among farmers and ranchers every day helping them better understand soil from a scientific standpoint so that they might foster life not destroy it. People such as Ray Archuleta, Doug Peterson, and Raymond Covino come to mind as examples.

Additionally, farmers such as Dave Brandt of Ohio, Gail Fuller of Kansas, and Gabe Brown of North Dakota, are just three of many tractor-driving scientists whose laboratories are their pastures, fields, and farmsteads. These are people innovating to increase the income streams in their operations while simultaneously building soil, capturing and infiltrating water, and sequestering carbon. In other words, they are producing food and not destroying their local ecosystems in the process.

The best part of eco-agriculture is that it is actually science based. The study of the soil food web is highly informative regarding how we should be practicing agriculture, and such study points to complex and sophisticated ways of farming. Agricultural techniques that respect what Wes Jackson calls the “measure” of nature are regenerative, rather than degenerative.

So it isn’t technology that most of the people in the regenerative agriculture movement decry. It’s just some technology that we feel isn’t appropriate. Certified permaculture design consultant, Michael Leonido wrote this recently about this topic:

The folks on the cutting edge of this movement are leveraging everything they can find that will help. Just look at the litany of devices Curtis Stone is using to maximize manpower in his urban gardens, or the ongoing research and tweaking Mark Shepard is doing to machines to harvest in his forest systems. We cannot afford to be anti-technology if we want to be successful. Hobby production? Sure. Backyard gardens? Whatever, plant away. But business? You will not find a business in regenerative agriculture that is successful without leveraging appropriate technology to the limits of its capacity. In fact, often we are talking about using these tools beyond their design specs because the folks pushing this to the limit are tinkerers and problem solvers.

Pamela Dodsworth, a sheep farmer in Colorado has, through the science of microbiology, improved the health of her pastures. She reports the improvement is due to intensive rotation and minimal mechanical interference: “We are considering doubling our stocking density while I’m seeing neighbors pour commercial fertilizers onto their fields in order just to maintain production.”

The case studies are growing daily of farmers and ranchers who are abandoning the industrial agriculture approach for more scientific and eco-collaborative means of production. I’ll beg forgiveness from some of my pioneering friends and say these case studies aren’t just back-to-the-landers, preppers, hippies, tree huggers or Earth worshippers. The people showing that alternative forms of agriculture are productive wear overalls and trucker hats and drive pickup trucks. The commonality among these everyday farmers and ranchers is their realization that industrial agriculture is ecologically destructive and unsustainable as a business. They are bold pioneering people who won’t let the rhetoric of agribusiness blind them to other methodologies that make business sense.

What disqualifies us as luddites is the fact that productivity is still the measure of success. However, the measure of productivity has changed for us. It’s not yield per acre, though some still use that as a measure of comparison. The best of these farmers and ranchers are measuring their productivity by built soil, enhanced soil food web, and increased biodiversity. These are all quantifiable measures that require sophisticated means of production, detailed planning, and an attuned awareness of the landscape one is operating within. The income streams occur as a natural result.

The United Nations FAO, the Rodale Institute, and a host of other NGOs are increasingly reporting that industrial agriculture does not have a viable future. Those of us who have realized this in philosophy and practice are now ahead of the game, which is an ironic place to be given that supporters of industrial agriculture continue to label us luddites.

No, eco-agriculturists are not luddites. Rather, we are independent, critically-thinking agricultural professionals who have demonstrated that healthful food can be produced at large scale through eco-collaborative methodologies that not only feed humans but foster a broader spectrum of life on the planet.

On the Logic and Nature of Blogging

An Exception that Proves the Rule: NFTs Don’t Serve the Great...