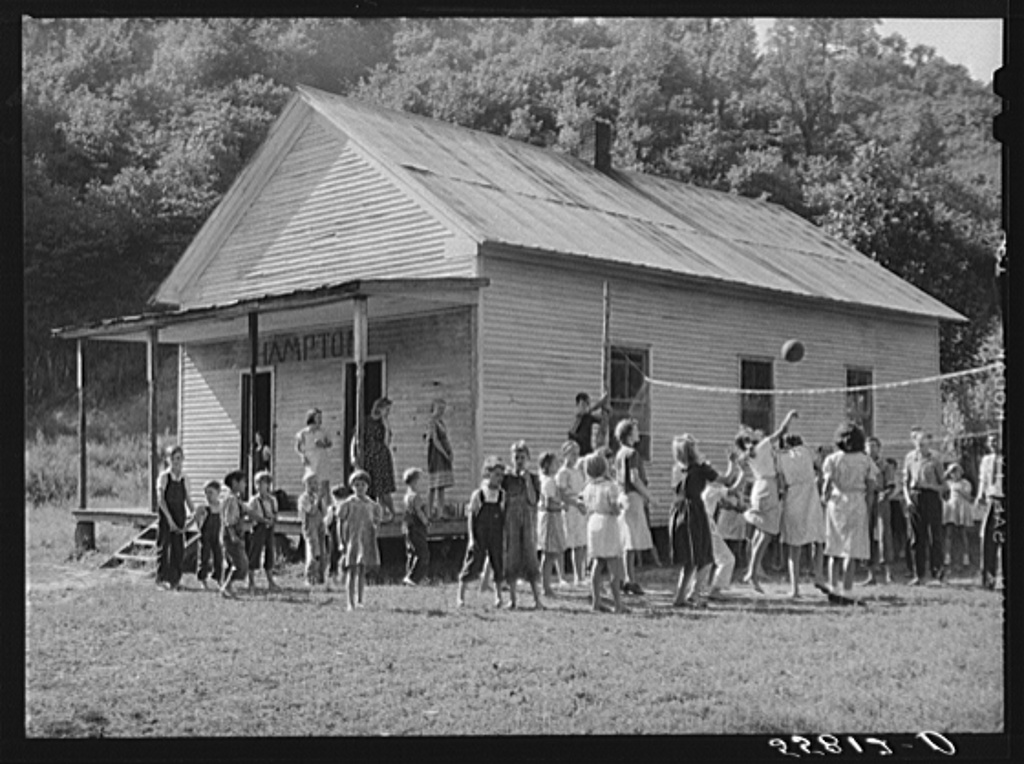 As the fall semester looms, the minutia of meetings and syllabi revisions threatens to drain the excitement from my impending return to the classroom. As a way of warding off this danger, I am reminding myself of one of my favorite poems, Maurice Manning’s “The Fog Town School of Thought.” If you don’t know Manning’s poetry, get thee to a bookstore. Manning studied under Wendell Berry at the University of Kentucky, and he now lives and teaches in his native bluegrass state. One indication of his Porcher sensibility is the author photo on some of his books, which shows him standing next to a sign, hanging askew, that reads, “This Place Matters.”

Manning’s poem articulates an educational ideal that inspires and challenges me. Before I explain this ideal, though, read the poem aloud and savor its images and sounds:

Besides being a beautiful poem, a single sentence that unfurls with love for a particular place, there are several practical suggestions here for how we might educate students to read “the book in front of us.” I’ll expand on three: praising humble beauty, listening to local voices, and getting outside the school building.

“They should have taught us beauty / and weaving bees,” Manning’s narrator says. At first glance, these may seem like separate subjects, but I think they are related. Weaving bees have a particular kind of beauty that is often lacking from the traditional curriculum. It’s a very communal, quotidian, humble beauty, a beauty that bears fruit in delicious honey. Bees go about their business under our noses, yet they live incredibly sophisticated lives and, as the current epidemic of Colony Collapse Disorder has reminded us, serve a vital role in the reproduction of many plants. When I was home one summer, my dad’s beehive split unexpectedly—at least it was unexpected to an amateur beekeeper—and I watched my younger brother climb to the top of a forty-foot cedar tree to saw off the limb on which the swarming bees had clustered. I certainly wasn’t going to climb that tree myself, much less climb down it like my brother did, clenching in his teeth the rope to which he had tied the branch, heavy with bees. How bees manage to orchestrate the complex process of a hive split, I have no idea, but that understated, mundane cooperation is part of their peculiar beauty.

Yet that’s not a kind of beauty we typically praise in schools. Schools uphold exceptional heroes: explorers, scientific innovators, authors who write amazing books and lead terrible lives, alumni who make a ton of money and might donate some of it if we praise them publicly. Yet Berry warns that our obsession with such heroes obscures the kinds of challenges most of us will face in ordinary life. In particular, “there are two issues that [heroic stories] are prohibited by their nature from raising: the issue of life-long devotion and perseverance in unheroic tasks, and the issue of good workmanship or ‘right livelihood.’” And as Berry points out, “It may, in some ways, be easier to be Samson than to be a good husband or wife day after day for fifty years.” So in my curriculum and my conversations with students, I strive to praise people who lead lives of faithful service rather than celebrating only remarkable examples of individual achievement. Maybe school marketing departments could even profile alumni who have courageously persevered in ordinary work, accomplishing it with skill and rendering a beautiful life from mundane service.

Manning’s narrator also recommends a class on “listening and standing alone.” If we structure the classroom so that students imagine “education” to mean, “passively receiving information and best practices from distant experts,” we impoverish our students. We set them up to imagine themselves becoming either experts dispensing advice or sheeple dutifully writing it down. In an essay titled “Local Knowledge in the Age of Information,” Berry critiques “the dichotomy between the center and periphery,” between the urban, costal centers and the fly-over country they treat as colonies. But the “center of centers,” Berry writes, is now “the global ‘free market’ economy of the great corporations, the periphery of which is everywhere, and for its periphery this center expresses no concern and acknowledges no responsibility.” To resist this irresponsible and damaging arrangement, students need to learn how to conduct a real conversation, one in which they listen to local voices. They need to be able to genuinely hear local needs and concerns, and then consider how they might apply a combination of local and outside knowledge to address these.

There are of course as many different ways to foster such conversations as there are different local communities. I certainly don’t think I’ve figured this out, and it would be hypocritical of me to offer a set of best practices to subvert the cult of best practices. In my own classroom, I try to assign at least one or two works of literature written by an author with ties to our region. I give my writing students assignments that require them to learn about the history of our place and interview local experts, or I take them on field trips to talk with a community member. I hope that I’m even shaping my students to be active conversationalists when, in my upper-division literature courses, we all sit around a large table. Through these practices, I’m trying to impress upon my students that education is fundamentally about listening to other members of their communities, particularly those members whom we tend to ignore, whether the spiders building webs or the streams branching like the veins of a leaf.

Getting Outside the School Building

Manning’s poem suggests that if school were held on top of the hill, and if students stayed late to watch the fog bloom, they might learn differently than they do when confined to a classroom. But administrators and teachers, particularly at universities, prefer to stay within the bounds of their institutional walls. In his book Life is a Miracle, Berry links this tendency that universities have to withdraw from their local communities to the rigid divisions between academic departments. The false division between disciplines enables each one to pursue its own questions and concerns without having to answer for their broader implications or effects: Economists can study abstractions like GDP and the workforce participation rate; sociologists can investigate the opioid crises or the voting patterns of “evangelicals”; biologists can work on genetically modifying crops; English professors can talk about obscure authors from Kentucky. Everyone stays happy in their own little silo. But these divisions, Berry argues, are damaging to all concerned. As an antidote, he recommends holding “a conversation out of school” and points to the conversation that he and scientist Wes Jackson have carried on over many decades. They approach questions of land use from different disciplinary perspectives, but because they each value the other’s perspective and work to understand it, they have developed ideas that neither could have on his own (as an example, see their “50-Year Farm Bill”). As Berry suggests, these conversations often happen best outside of school, outside both its disciplinary structures and its physical confines. I’ve similarly found that some of my best conversations with students happen outside of the classroom and away from the campus.

For instance, my academic credentials in the field of literary study don’t particularly qualify me to talk about economics or politics. But in the wake of the 2016 presidential election—in which voters could “choose” between a New York technocrat and a New York billionaire, neither of whom, Berry writes, were “much aware of the economic landscapes of farming, forestry, or mining, or of the people of the land-using economies”—another English colleague and I decided to host a series of conversations around a different sort of populism. We titled it “Politics from the Household Up” and discussed readings by authors such as Christopher Lasch, Wendell Berry, Herbert Agar, Allen Tate, G. K. Chesterton, and Jean Giono. Students didn’t come out in droves, but a handful of us shared thoughtful, encouraging conversations around the wood stove in my living room or the fire pit on my colleague’s back porch. These were truly conversations out of school: there were no grades, no classrooms, and also no disciplinary expertise on our part. Our discussions explored a rich tradition of populist, agrarian, decentralist, distributist thought that Trump’s appeals to “populism” tend to obscure. And our students got a glimpse of our homes, the places where we work to practice the ideas we usually discuss in the classroom.