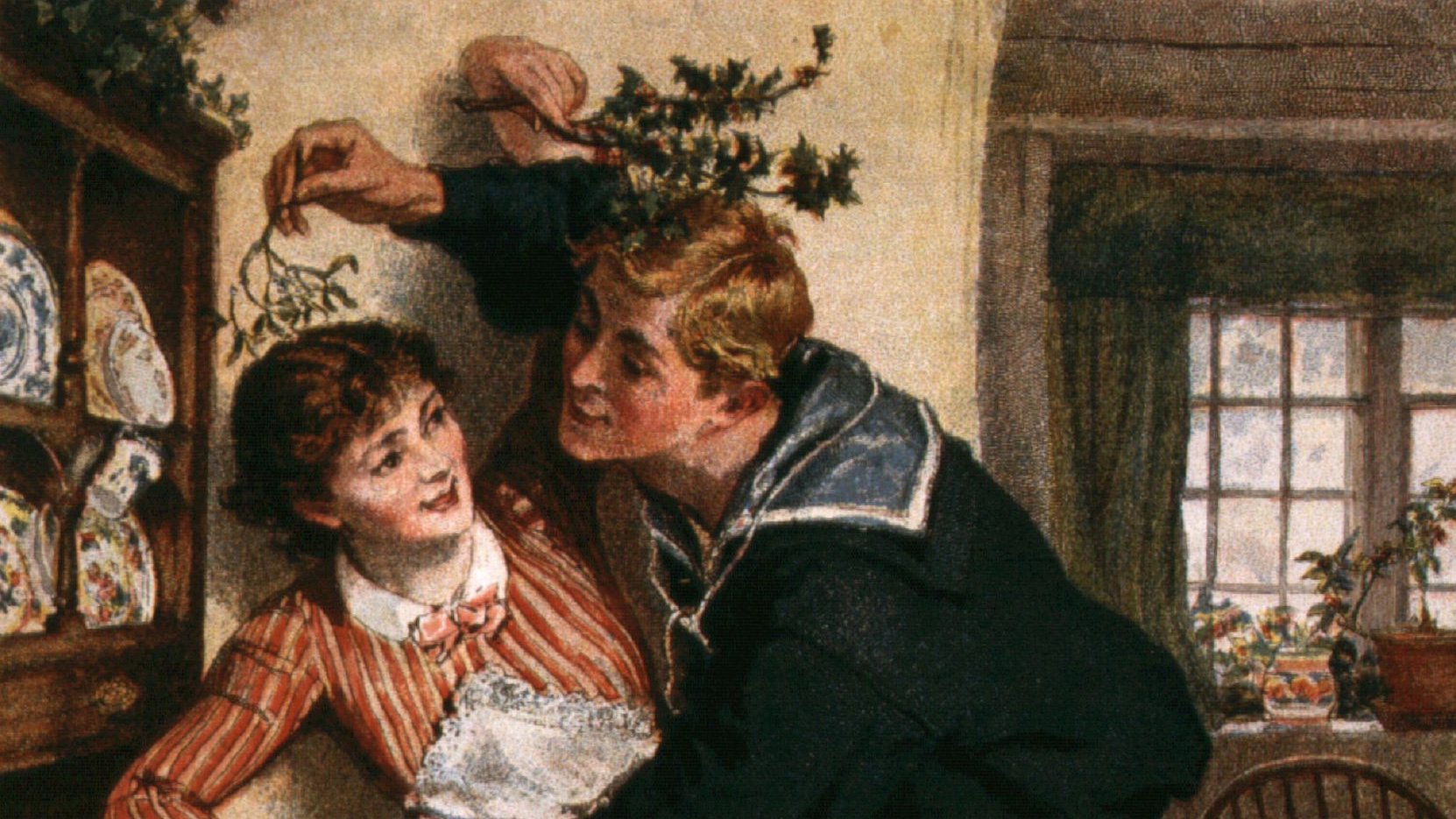 The frost performed its secret ministry last night, but the air temperature today will climb into the fifties.  No sense singing “please have snow.”  There won’t be any, though we might legitimately hold out hope for mistletoe.  Kissing remains popular, and should, even in unseasonably warm weather.

My thoughts turn of their own accord toward my father this time of year.  It was even warmer four years ago when, on the 23rd of December, he made a final exhalation.  I was racing across Illinois to be at his bedside.  I remember seeing the number 63 on the dashboard as we crossed into Michigan.  That was warm for December.  And I remember thinking the times were out of joint, even as I whispered across the miles that he should give it up if he needed to.  No need to hold out on my account.

I didn’t make it—and did.  The air went out of him about two minutes before I arrived; I took him by the wrist and felt one last feeble heartbeat.  He’d saved that much for me. He was generous to the end—and maybe a little stubborn too.

But this year it’s the damned heat more than anything else that triggers the memory.  How like four years ago it seems.  I am going to go ahead and account it unnatural that, for the past two days, I have been working on equipment without the need of a winter coat or gloves.  I’m not saying that the air temperature in my little township has global significance.  I’m also not saying it doesn’t.  I think it necessary, and necessarily conservative, to accept the judgment of the climate-watchers; I remain skeptical about the future they so confidently model.  The Inevitable doesn’t generally get much purchase on me.  What does is loss, the feeling that something good—maybe even salubrious seasons—is going away.

What I know for sure on this Christmas day is that I am four years closer to being dead than I was in 2015, when on the wings of a greenhouse gas I lost a battle against time, stepped into my parents’ house, and saw the glazed eyes.  “The eyes glaze once, and that is death,” said Dickinson,

Impossible to feign
The beads upon the forehead
By homely anguish strung.

I suppose it is good to be reminded that we will lose all battles against time, but better still not to speak of battles at all.  The relation of consciousness to time isn’t quite as bellicose as all that.  To speak of a battle, in which one side might win as much as the other might, would be to assume that the one real inevitability isn’t inevitable at all, when of course it is. For

Like as the waves make toward the pebbled shore,
So do our minutes hasten to their end.
Each changing place with that which goes before,
In sequent toil all forwards do contend.

Better, maybe, to say, “And time, that gave, doth now his gift confound.”

There is such “aching pleasure nigh” this time of year:  in the crackle of the fire in the hearth, in the lights and colors and music, in the blessings of the board, in the heart that grows three sizes, in the being home, in the theoretical snow.  Joy works for one reason only, near as I can tell:  because its “hand is ever at his lips, / Bidding adieu.”  We can’t have it on any other terms.  It’s always on its way out. Too soon the mistletoe will be a garland, and the lips beneath it cold.

Therefore let gratitude season the meat; let it be the garnish in the drink.  Let none of us fail in the offices of thanksgiving.  No snow? At least there was frost this morning.

Merry Christmas to all, and to all a good night, into which let none go gentle.  Rage against the dying of the light.

Harry Potter and Running from Death